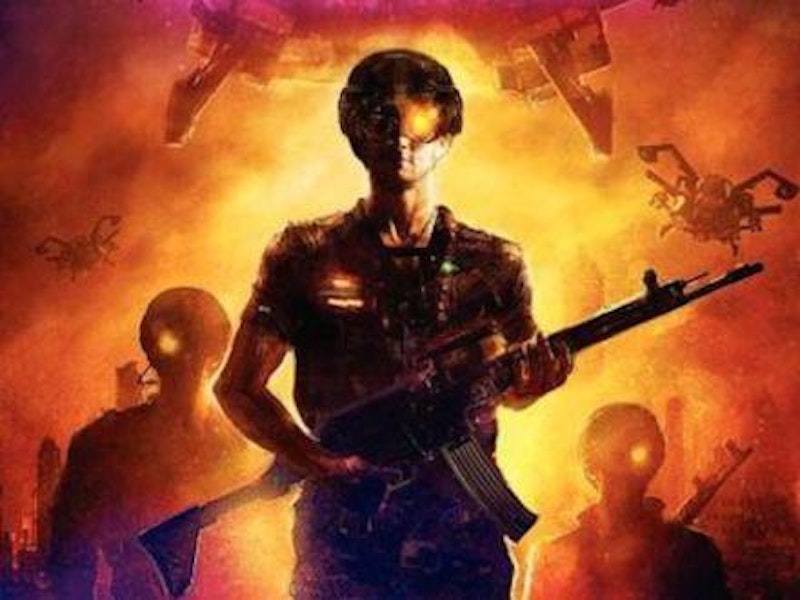 I’ve been reading more science fiction than usual lately. It’s partly a reaction to the looming apocalypse as reported in every news outlet around the globe, and partly because future technology is always cooler than the cool technology we already have. But mainly, I’ve been reading science fiction because people keep giving me books to read, and if you ask for my opinion on something, you’re going to get it.

My girlfriend—a publicist for the News Corp-owned HarperCollins, and generally more of a fantasy aficionado, but I love her anyway—handed me a copy of Nick Cole’s new book Soda Pop Soldier a few weeks ago. It’s a tale of professional gamers in the future, where the results of Call of Duty-esque games determine which global conglomerates get access to clutch advertising space. The hero, who we know only by his high-falutin’ gamer tag PerfectQuestion, is a hotshot pro gamer whose shots are simply not hot enough to save his ColaCorp teammates from the cutthroat pros working for WonderSoft. The Cola Wars rage on, and PerfectQuestion has to resort to black-market gaming to make ends meet—which, of course, leads to a whole other set of problems.

Any sci-fi geek will tell you that the genre’s appeal isn’t just due to the awesomeness of laser guns. (They nevertheless remain among the coolest theoretical weapons of all time, apart from the light saber and Green Lantern’s power ring.) Sci-fi is appealing because it teaches us about our present by showing us our future—the more plausible the future, the harder hitting the lesson. Cole hits right on the money with this, extrapolating the current trend of professional gaming to a realistic extreme.  Why just sponsor a player when you could sponsor a team? Why advertise on the player’s gear when you can make the game itself an ad? The corporatization of our hobbies is infectious, and it can replace fun with work if we’re not careful—as PerfectQuestion laments through many glasses of scotch.

Scotch also plays a big part in Soda Pop Soldier, and for good reason: it’s not just a sci-fi book. It’s a sci-fi noir story, and that makes things extra interesting. PerfectQuestion plays a samurai in a World of Warcraft type of fantasy game on the black market, which gets him into a jam right out of a Humphrey Bogart film. When I asked Cole about his noir influences, he told me about his love for Chandler and the casebook of Philip Marlowe, who informs PerfectQuestion’s worldview. We get all the classic beats—a jilted lover, a femme fatale, the offer Our Hero can’t refuse (but might have to), a boatload of dough, and so on. But more importantly, we get a noir filter for our sci-fi analysis of our present; we must learn from a future that’s making the same mistakes we did in the past.

I could go on about Nick Cole’s writing—how deftly he captures the desperation of a poor man in a crumbling romance, how brutally he uses his Army experiences to create a squadron of oddball soldiers whose lives are continually torn apart by virtual war, how cleverly he melds the postwar aspects of noir with the trauma of futuristic conflict, how he describes food. And Cole’s social commentary is as spot-on as Chandler’s ever was. This is a book about world-encompassing greed, and people who mistake that greed for virtue, and the importance of virtue in a darkening world.

Cole told me that after writing his epic series The Wasteland Saga—The Old Man and the Sea set post-apocalypse—sitting down to create Soda Pop Soldier was “fun.” It’s even more fun to read, and there’s a lot of humor throughout to lighten the load. But underneath its hip gaming veneer, Soda Pop Soldier is tech noir at its finest.