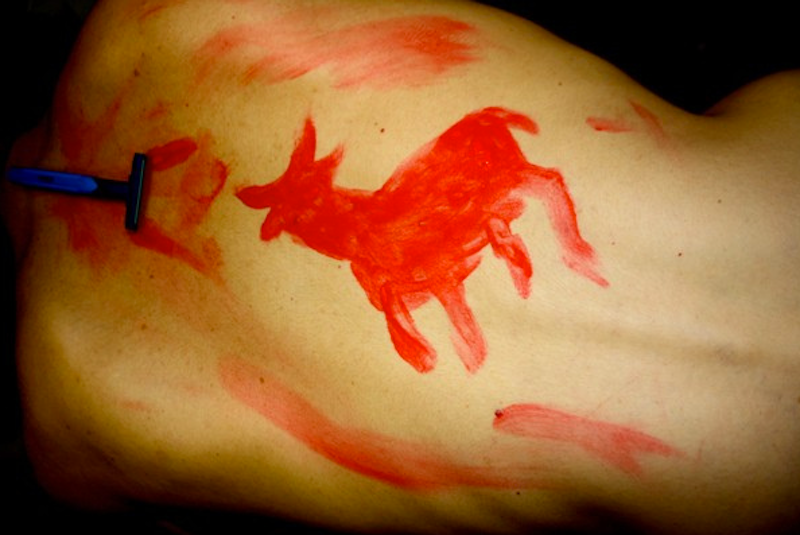 Across the street at Pimlico they’re setting up for an all-weekend EDM festival. EDM is electronic dance music—which as far as I understand involves laptops and a lot of bass and something known as “the drop,” and is mostly appreciated by 16-year-olds wrecked on MDMA. I walk out to smoke and through the trees I can see a lot of tents and some kind of huge multi-color tower. Just last weekend I read about overdoses at the Mad Decent Block Party at Merriweather Post Pavilion, about 30 mins away—two dead and 20 hospitalized—and I wonder if I’ll wake up on Sunday to find a dead 16-year-old on the lawn.

Probably not, but what the hell do I know? I listen to Modest Mouse and sad folk music and I’ve never done synthetics. I don’t even like pot that much, mostly because I always did it with friends and after a few hits I’d just wander off and lie in the grass—if anyone talked to me I’d lose track of what they were saying after about five or six words.

Is the sky always that blue? That’s really blue.

Once in a friend’s kitchen, high as shit, I was eating some of her mom’s leftover Christmas ham and became convinced that it was actually raw. The next day, driving a girl down to D.C. for a Post-Secret exhibit, I found a bunch of ham in my glove box, having decided the night before that if I got sick I’d need samples for the hospital to test.

I once got so high I couldn’t remember how to start my car.

Keys? Wait… these do something. Keys…

These are unremarkable anecdotes but I think they’re funny. Most of my friends were more experimental: mushrooms, salvia, all kinds of legal and illegal pharmaceuticals. I rarely took anything harder than Wild Turkey 101. A girl I’ve known since first grade went off to college on the Eastern Shore, found herself some junked-out trashcan boyfriend, and is still, as far as I know, an incoherent mess—lost somewhere far away. I’ve had sad late-night phone calls asking if I heard about so and so—“he’s at the hospital now, that’s all I know...”

All this Fox News hysteria about legal pot in Colorado and Washington while six-year-old kids are prescribed God knows what for their ADHD. A recent survey (PDF) found that 25% of kids had abused prescription drugs, many of them under the age of 14, and more than 50% said prescription drugs were safer than illegal drugs. I remember a few years ago the cops busted three kids from my high school who had robbed the local pharmacy, taking Xanax and Oxycontin—to sell or use I don’t know. Legal pot is long overdue, sure, but we still don’t understand that some of the most dangerous drugs involve a co-pay.