The world is a sick machine. 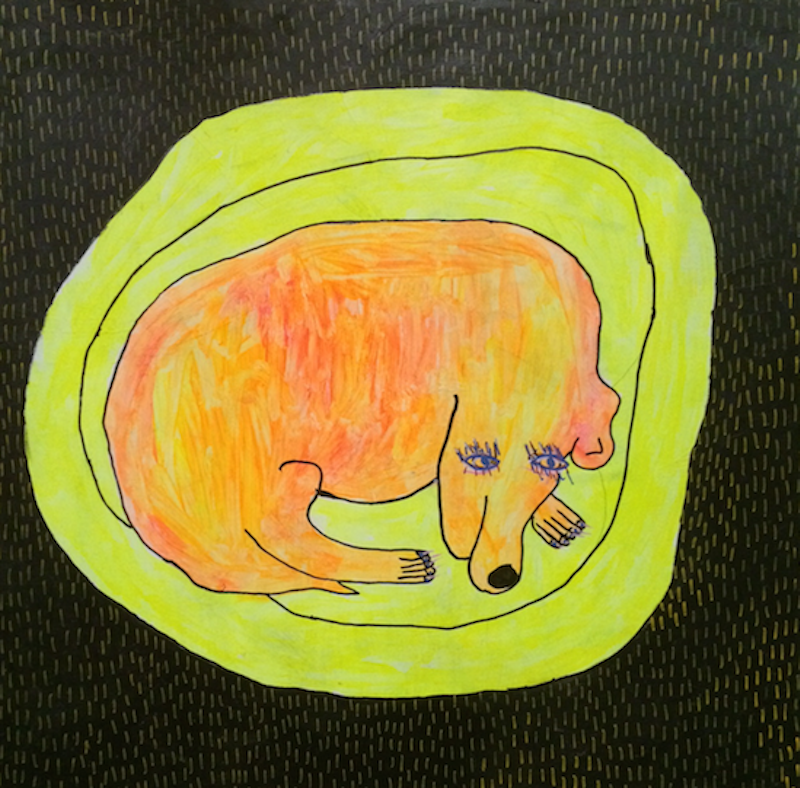 We had to put our dog down on Sunday. Rest in peace, Mabel. She was such a sweet pup. Don’t know what to do with myself. She had so many health problems (arthritis, tumors, kidney failure, collapsed veins, blindness, deafness) and was in so much pain that it had to happen. The vet told us most dogs don’t even feel the initial sedative but she freaked out and it was just an awful scene, everyone bawling and waiting for the narcotics to give her some relief. Even the vet was upset and surprised, but it was proof that it was the right thing to do, despite Mabel’s buoyant personality and ridiculous Hanna-Barbera smile and excitement. I can’t deal with having pets: it messes with your head. Last week, when I found out about Mabel’s situation, I sincerely lobbied for a stay of execution. She bounds up for food and walks, right? She can still move. I never had a dog growing up and I felt like a little boy. Mabel wasn’t even my dog; she was more like my roommate. And now I feel guilty for wanting to keep her in that body any longer than we did, knowing that she had become so numbed to the pain that it had driven her insane. You can’t ask a dog how it’s feeling.

Robin Williams hanged himself this morning. It was a convenient distraction for about seven hours tonight, commiserating online with millions and playing Death to Smoochy in the background as I tried to write something that wasn’t glib or frenzied or unfocused. I’m a news hound and I get off on this stuff. So as Death to Smoochy flew by, I started to write some mawkish garbage about what a mass psychological blow it is to have someone like Robin Williams commit suicide. After I heard the news, I came home to an empty, dark house, and I was so antsy I put my stuff away and just started walking aimlessly around Baltimore’s Station North. I ran into a friend of mine in front of the Charles Theater who had just heard too. He told me that the first thought he had after waking up was to watch Dead Poets Society for the first time, out of nowhere. Dead Poets Society could easily have been total cheese but the real love in that movie between a teacher and his class is—strings build—so touching it—strings crescendo—makes me cry…

This whole thing about Robin Williams is such a wash to me right now because we lost Mabel yesterday. At first when I found out, it was a bit of a relief honestly, because you can soak in the comfort of being shocked and sad with people around you and all over the world, and there’s just the WHOA! factor that my dad and I get a gallows humor kick out of: the suddenness of it, the grisly details, the juicy story, all drunk from the long straw at a safe distance. I like to watch. But now I’m done throwing myself into the pretend grief ritual I usually soak up like a sick sponge because I have a real loss to deal with.

By the way, I’m as bad as any l4m3$tr34m m3di4 hack for only just mentioning the insanity happening in Ferguson, Missouri as we speak, a town under martial law because sick cops murdered a teenager, Michael Brown, who was unarmed. The town understandably rioted, but only after the cops brought in the tanks and the teargas and the riot gear. Good for them: level the city. Throw every cop in a ditch on the side of I-270 10 stories high, let them pile up and shish kabob the pigged mass to end this meaningless racism. Let them pile sky high. I want eyeballs skewered high as the space needle because that’s how I feel right now and I know it’s not right and that’s why I’m staying inside in the middle of a rainy night, unable to sleep, listening to a two-hour Smashing Pumpkins interview from 1995, reading, writing, playing guitar, jumping around an empty apartment feeling in a real way that the world is a sick machine.

Right now it’s almost four a.m. and I’m writing on the couch facing Mabel’s old bed, above it a painting of her by my comrade Nick. When we were waiting for the vet and playing with Mabel for the last time, I ended up choosing the last song she ever heard: “Que Sera Sera (Whatever Will Be Will Be)” by Sly & the Family Stone. After she was gone, when we went to throw out her bowls and leash, there was one LP sitting on the loading dock of the Copycat. It was Fresh, by Sly & the Family Stone, with “Que Sera Sera” on the B-side.