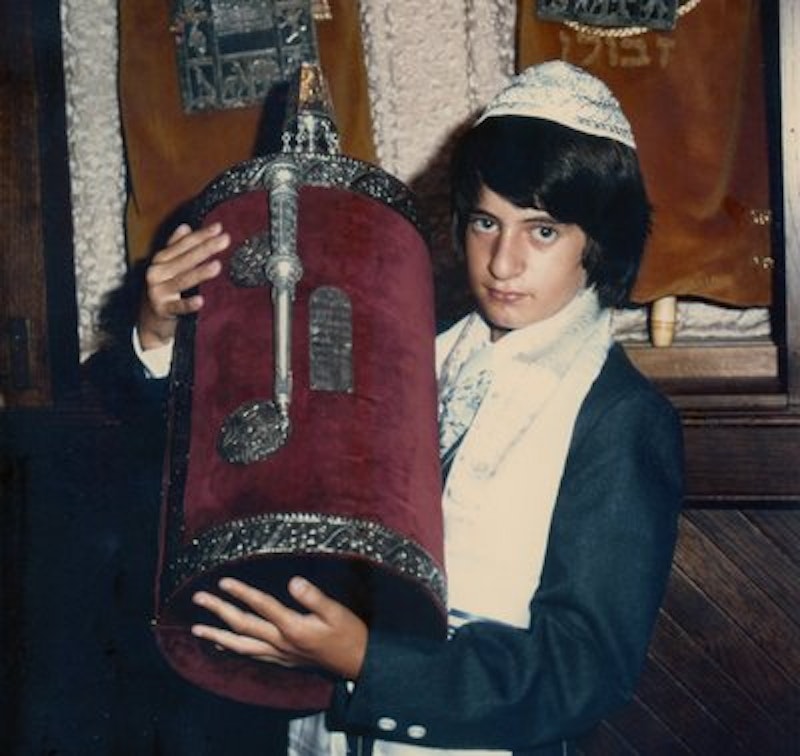 As a rite of passage ritual, my bar mitzvah fell somewhere between African teens sticking their penis in a wasp’s nest and New Guinea boys thrusting sharp arrows through their tongues. My bar mitzvah memories are murky. I recall a feud between my two grandfathers that supposedly began when I was eight days old at my circumcision. My paternal grandfather Sam, an Orthodox Jew, had wanted a first-time mohel to perform my bris. My maternal grandfather Al, a secular agnostic, objected. There was no way he would let his grandson get snipped by a rookie. My parents sided with Sam but the mohel screwed up and cut a hole in my testicles. After I was rushed to the hospital for emergency surgery, Al threatened Sam’s life and a blood feud was born.

On the day of my bar mitzvah, Al arrived at the synagogue smelling of alcohol. According to my grandma, he’d been sipping blackberry brandy all morning to quell a “nervous stomach.” Sam said something snotty in Yiddish and Al replied, “You tell that medieval motherfucker to keep his mouth shut or I’ll shut it for him.” The rabbi intervened with a joke: “I can’t believe I cancelled a dentist appointment for this” and the bizarre tone of the day was established.

We separated my grandparents in different sections of the auditorium. I sat next to the rabbi on stage as the cantor began the ceremony with a Hebrew song. The room was packed and the audience appeared hostile. Who could blame them? They were wasting a Saturday morning on a snot-nosed kid they barely knew and were expected to fork over a $100 gift for the privilege.

The highlight of the service was the Torah reading. About halfway through the ceremony, we all stood as I followed the rabbi off the bima (the stage) and walked to the Aron Kodesh (the holy Ark). The rabbi uttered a prayer and then placed a large Torah scroll in my arms. The cantor resumed singing and we walked in procession around the sanctuary. This was a sacred moment and everyone was expected to kiss the fingers of their right hand and lightly touch the Torah.

Approaching the aisle with school friends, I became nervous. Robby Levine, a noted prankster, had promised to do something to make my day memorable. Sure enough, Robby kissed his fingers and slammed his hand atop the Torah. The 20-pound scroll fell from my arms and hit the floor. The congregation gasped. The singing stopped. The rabbi lifted the Torah, gritted his teeth in a forced smile and gestured for the ceremony to continue.

As we returned to the stage, I was shaking and covered with sweat. Had I just nullified the sanctity of my bar mitzvah by dropping the Torah? I whispered into the rabbi’s ear.

“Don’t worry,” the rabbi whispered back. “It just means you have to spend some time in hell.”

He smiled and patted my leg. I couldn’t tell if he was joking and began to panic. I searched the congregation for a friendly face. In the left aisle, second row, sat my Grandpa Al. I knew he would support me. We locked eyes and he gave me the thumbs up sign. Then he reached into his jacket pocket and took another swig of brandy.

As the bar mitzvah boy, I was expected to read a Torah section in Hebrew and give my interpretation in English. My Torah portion involved the Exodus story of Moses and the Jews wandering the desert for 40 years. While meeting with the rabbi the previous week, he’d asked my opinion of the passage. I said, “I don’t understand why people would follow Moses for 40 years. Obviously he was lost. If it were me, I would have looked for someone on a camel and asked for directions.”

The rabbi upbraided me, saying I was completely missing the point. “Moses was testing the Jewish people’s loyalty,” he said. “Those who followed were worthy. Those who complained and wandered off were not deserving to live in Israel.”

My 13-year-old mind thought Moses was kind of a dick, but I kept my opinions to myself. Two days before the ceremony, grandpa Al asked me to read him the speech.  He heard the words and grimaced. “That’s a load of crap,” he said. “Moses was lost. You know it, I know it and the rabbi knows it. He was 80 years old and he was probably losing his wits. Forty years? I wouldn’t follow that guy for 40 minutes.”

Al urged me to change the speech. He said it was my duty to be honest and true to myself. With his help, I rewrote the words to include passages like, “As Jews, it’s our job to find our own way despite what our elders say.” And “If someone tells you to jump off a building, maybe you should think twice before you comply.”

I cherished grandpa Al’s rebellious spirit but after dropping the Torah, I lost my courage. My speech toed the line and basically plagiarized the rabbi’s ideas. Everyone applauded and the ceremony mercifully came to an end. The rabbi shook my hand and said, “Congratulations. You’re now a man.”

That evening, after a long and tortuous day, I approached Grandpa Al.

“For my speech. I chickened out.”

“You did what you had to do,” he said. “Just like those people who followed Moses. Don’t worry about it. I’m proud of you.” He gave me a hug and removed the blackberry brandy from his pocket. He poured a small amount of alcohol in the cap and handed it to me. I swallowed it and began coughing. He laughed and shook my hand. “Congratulations,” he said.  “Now you’re really a man.”