Lord of the Dance

How belief makes the world. 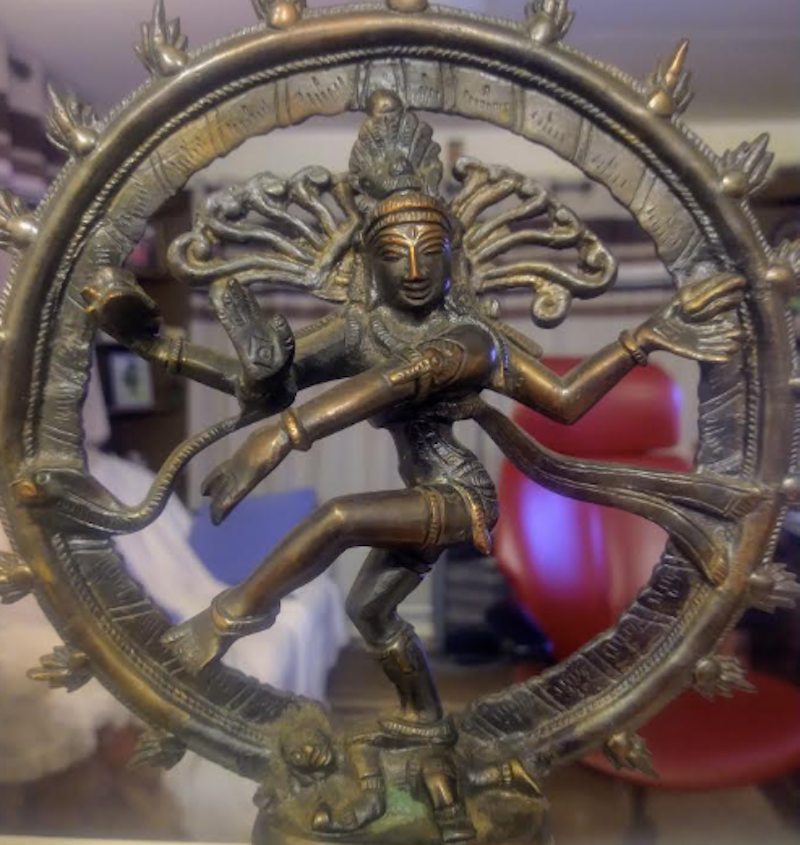 This is Shiva, in the form of Nataraja, the Lord of the Dance. The statue was given to me by a friend, Bapu, who died on January 8th 2020. He left it me in his will although, due to various complications, I didn’t actually receive it till Christmas Eve. It was one of the best Christmas presents I ever had.

It’s just under 10 and a half inches high by nine inches across. It’s made of brass, using the lost wax method, based upon a form that dates to the sixth century AD at the latest. It’s probably much older.

Another hand holds a lighting bolt, or a flame, while his two forward hands make symbolic gestures of peace and poise. So there’s a balance here, between the rhythm and the fire of the rear hands, and the poise and precision of the front hands. He has four arms altogether, though earlier forms of the image allow him as many as 10.

He’s dancing in a ring of fire upon a corpse, or on a sleeping form. Wikipedia tells me that this is the demon of ignorance, but I also like to imagine that it’s yourself, your mortal body which is destined to die, and that Shiva is the energy-form which will emerge from that once all matter is consumed at the end of the Universe.

On the top of his head sits a crown of feathers and a crescent moon. A snake is uncoiling from around his neck, reaching out to the circle of fire, which, along with a scarf and the point of his crown, serves to hold the image together. He’s dressed in a tiger skin, with anklets and bracelets, armlets and earrings, calf rings and thigh rings, waistbands and necklaces, a prince in all his finery. His feet are bare and on the palm of at least two of his hands there’s a diamond shaped design, like an eye. He has a third eye in the middle of his forehead.

You don’t want that eye to open. If that eye opens, everything will be destroyed. Shiva is like Cyclops, the X-Men character. If his third eye opens a beam of fundamental energy will flash out like a flame and destroy everything in its path. This is why Shiva is the destroyer. When the Universe is old and decrepit, when it’s finished, and no more use can be had from it, it’s Shiva who will consume it in atomic fire, by opening that eye and burning the whole thing to nought.

But according to Shaivites, Shiva is actually all three: creator, preserver and destroyer. He is Almighty God in all his splendor. What this shows is that Hinduism isn’t really a religion, but an amalgam of religions. The trinity is there to preserve a sort of unity between the forms—a cosmic fudge—but if you are a Shaivite, there’s only one god, and that God is Shiva.

This is why Shiva’s statue stands outside the Large Hadron Collider at CERN in Switzerland. As Fritjof Capra says in The Tao of Physics: “According to quantum field theory, the dance of creation and destruction is the basis of the very existence of matter. Modern physics has thus revealed that every subatomic particle not only performs an energy dance, but also is an energy dance; a pulsating process of creation and destruction. For the modern physicists then, Shiva’s dance is the dance of subatomic matter, the basis of all existence and of all natural phenomena.”

I think I’ve met Shiva, at least twice in my life, both of them in dreams. In the first I was sitting in a chair made of flesh. My hands and my arms were part of the chair, as were my feet, molded into the chair, so that I couldn’t move. I was sitting in a chair whose arms and legs were mine. The chair was my body. I tried to stand, and there was this little ripping sensation, not unlike a velcro strip being pulled apart, and I was able to stand, separating myself from the chair. At this point there was a sudden burst of intense, multi-colored, psychedelic light and an image of the Nataraja was projected onto my inner eye. I saw Shiva and I woke up, startled. The image stayed vividly on my retina for a few seconds, so that, even with my eyes open, I could still see Shiva against the backdrop of the mundane world.

The second time also involved an out of body experience. This was during a period of insomnia. I’d been awake for 10 days, only managing to doze on my settee occasionally. After the 10th night without sleep I had a sudden, overwhelming urge to lie down. I went into my bedroom and threw myself on my bed and was instantly in a lucid dream. My body was on the bed, fast asleep, while I remained awake. The bed tipped up vertically and I began to slip down. I could feel the sensation of the bed covers rippling against my skin as I slid down and down and out the bottom, where I emerged into a vast open space, flying. There was an intense feeling of energy and power, and I spread my arms in triumph, like a boxer who has just won the world-championship, or a rock star before a stadium full of fans. Suddenly a billion watt beam of intense light flashed out from behind me and projected my silhouette onto a screen. I had wings. I could see them spread out behind my outstretched arms. I laughed. “I’m an angel!” I thought. Then I noticed that I had an erection. My penis was also standing out in silhouette, proud and hard, joyously, uninhibitedly alive. I laughed again. “What do you call an angel with a hard-on?” I thought. “He’s a devil!” And I woke myself up cackling with pleasure.

That’s how I see the Nataraja. Joyously, intensely, alive. Bristling with energy. Immense. Powerful. The supreme soul of the world. Pure masculine energy. Myself, but not myself. The self that’s greater than self. The before-self, and the after-self. The all-human all-divine. The forgotten self. The remembered self. Higher self. Deeper self. The self that’ll never die, dancing on the supine form of the body, blissfully asleep.

It’s all belief. The whole world is made up of belief: the whole of the human world, that is. We’re creatures of belief. We create belief and we are created by it. Animals don’t believe. Only humans believe. We make the world with our beliefs. We believe in time, and time comes into existence. We believe in money, and money comes into existence. We believe in houses, cars, motorways, iPads and iPlayers, Facebook and Twitter and all of these things come into existence. We stopped believing in the gods, and the gods disappeared. We stopped believing in ghosts, and the ghosts disappeared. We don’t have any ghosts any more, but we’re still haunted. We’re haunted by the ghosts of ourselves, the things we’ve forgotten we believe in.

Here in Britain £37 billion has been given to a private company for a test and trace system which doesn’t work. £37 billion is a very big number. If you spent £1 per second, 24 hours a day, it would take 11 days to spend £1 million, over 31 years to spend £1 billion, over 1173 years to spend £37 billion. Under the guise of the pandemic the ruling elites are lining their pockets for the financial crash they know will come. That’s why they don’t disguise their activities any more, why they lie to us in such a barefaced way. It no longer matters whether we believe them or not. They know the world is about to change beyond recognition and want to make sure they’re insured against their losses. They want to make sure they’re insured against us. It’s we who will pay for the pandemic, not them. It’s we who’ll suffer when the whole world of fictitious finance comes crashing to the ground.

Play with your beliefs, like a child plays with toys. Enjoy your beliefs. If a belief brings you pleasure, then believe in it, just don’t hold on to it. It’s the grasping of belief into a hardened fist that destroys the things you love. If a belief begins to hurt, then let it go.

As for Shiva: I take Alan Moore’s line on this. He says: “If gods are transcendent ideas, then the idea of a god IS a god.” In this case, the idea takes the form of a statue, an image that comes down to the world from the distant past, richly symbolic, a lively and energetic work of art, the vigorous expression of a culture long forgotten, but still pulsatingly alive, given renewed energy by our current imagination. A living cultural exposition of hidden truths, worthy of our attention.

As for my belief: it lasted as long as it took to write this article. Tomorrow I will believe in something else.