The Road from Dublin to Belfast 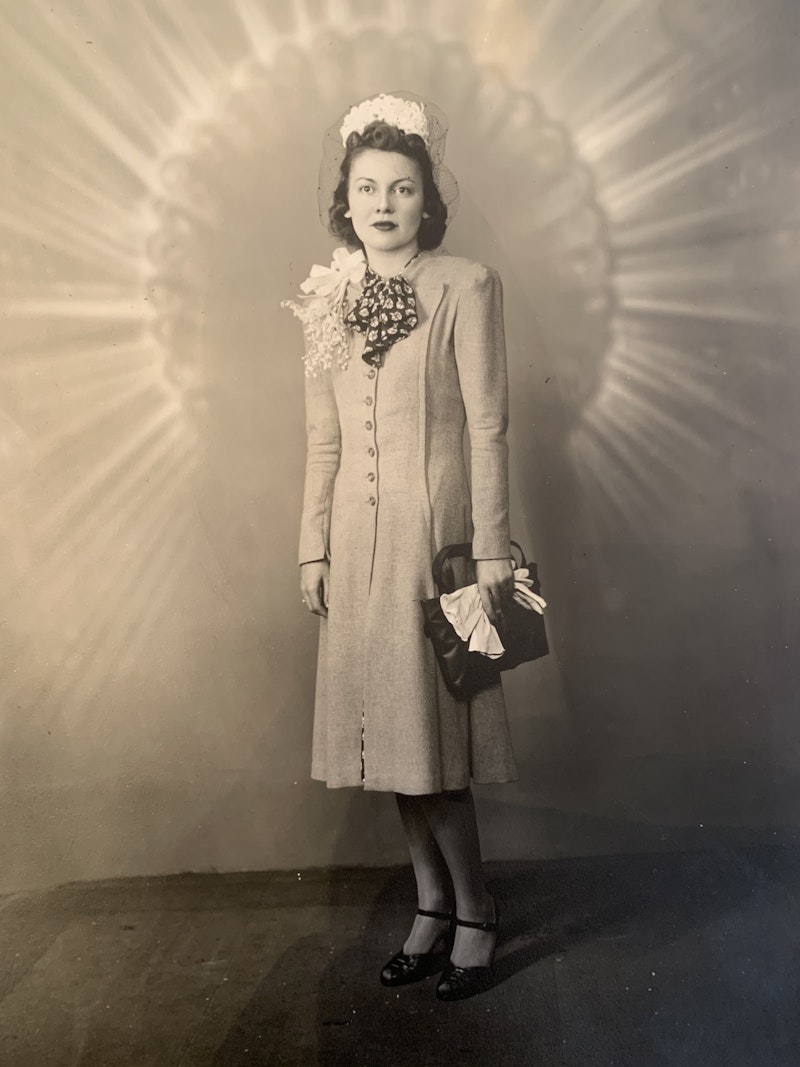 Several weeks ago, my cousin Bernadette sent a trove of photos from the really old days to many of us in her extended family. It was a marvelous set of emails and attachments, with pictures of her dad—Uncle Pete Duncan, my mom’s younger brother, our mutual grandparents (born in Ireland in the 19th century), Uncle Joe and several of Aunt Winnie (Joe’s wife, a tough and vivacious cookie). My dad was an only child, so Pete, Joe and their families were the relatives we’d see at holidays and at different points of the year (the Smiths and Duncans all lived in the NYC metro area, so it was easy to get together). I’ve got a large box of now-ancient photos—some pasted on brittle black paper—that my brothers and I divvied up after my mom died in 1983—but as I noted, the haul Bern sent, including dinners with my maternal grandparents (my grandfather, born outside Dublin in 1868, died in 1948, so I never met him; my grandmother passed away a year after I was born in 1955, not before dubbing me “Porky,” a nickname that didn’t stick), were mostly new to my eyes.

Bern also included a postcard that my brother Doug sent to the Duncan clan—oddly, he addressed it “The Duncan Kids” at Pete and Aunt Peggy’s Queens address, even though three of their four kids were grown and off on their own—from Belfast. I was on that trip, too, but first some context.

In the mid-1980s, some of my friends at weekly newspapers across the country, all part-owners, decided that their operations were running smoothly and spitting out cash—though all began on a shoestring—and it was an opportune time to take a “sabbatical,” rotating each year. One fellow at the San Diego Reader, for example, lived at a monastery for a year; another, at the Chicago Reader took a break to decompress and undertake a course of study, the thrust of which I’ve now forgotten. Another spent a year in Paris. It’s inconceivable today—especially since such furloughs are involuntary—but that was an option, a timeout after working seven days a week for peanuts for a long time. Others, like my good friends Jim Larkin and Mike Lacey, who started Phoenix’s New Times, took advantage of their success to buy other weeklies, all in danger of going under unless they were acquired by another company.

At Baltimore’s City Paper, my partner Alan Hirsch and I thought the idea of 12 months away from the paper was hilarious, but fully approved. These were, after all, men and women we’d see two or three times a year at newspaper conventions or croquet tournaments—in some cases more often—and they were friends for whom we had respect. (Several of them, from New Times and Chicago Reader, several years older, were very generous to us, and we benefitted greatly from their advice. Also the late Peter Cox, proprietor of Maine Times, who told me in 1979, “This is a rough business, Russ, but it’s worth it, even if seems sometimes that the lows outnumber the highs.”)

Anyway, in the spring of ’86, I told Alan I was going on my own sabbatical, for a month-long trip to Ireland, a country I’d never seen. Our own enterprise was on auto-pilot—and we exploring selling the paper—so he assented without batting an eye, but ribbed me, saying City Paper might be able to survive my 30-day absence.

Doug signed up for a week—he’d never been to our ancestral home either—and we flew first to meet another brother for a long, and luxurious weekend at Ashford Castle in County Mayo. It was mid-July, so the sun didn’t set until after 10 p.m. and we had plenty of long, contemplative walks, lamb and prawn dinners, and cocktail hours galore. (My only beef was that my suitcase was lost for 12 hours and when it appeared, was partially shredded, ruining a new suit. I considered pursuing compensation, but the forms were extensive, so I said fuck it. My zip-up bag, which included a clunky and heavy typewriter, survived the journey intact.)

Doug and I set off for Dublin and the well-appointed Gresham Hotel the following Monday, visited what we believed was the town of our grandfather’s birth—my brother Gary had done the spadework on that issue a few years prior; learning, for example, that his name was really Peter Dungan, and that a harried clerk at Ellis Island had mistakenly written it down as Duncan, which solved a mystery—as well as various cemeteries, St. Stephen’s Green, Trinity College, and we both had our first “real” pint of Guinness, which I thought was foul in America, but waiting the five minutes for the bartender to pull the pint, shave the excess foam with a stick off the top, changed my whole attitude.

After an unwise night of drinking, Doug (at the wheel) and I set off for Belfast, because in 1986, a trip there for the curious was unavoidable. It was about a six-hour drive, and once we crossed the border into Northern Ireland, it was like the opposite of The Wizard of Oz: the lush greenery and bustling farms of the Irish Republic turned to black and white, with a succession of small, depressed towns (not unlike New England in the 1970s), leading to the city. We stayed at the deluxe Forum Hotel (the “most-bombed hotel in Belfast,” whose name was restored to its original Europa that fall), and though it was a magnificent building, the barbed wire around the building and security checks inside were a touch daunting. More pleasing was the discounted rate of $125 for a huge room; it wasn’t a good year for tourism in Belfast.

Unlike some Irish-American friends in Baltimore and New York—who bragged about giving money to the IRA; so chic!—I took an objective view of “The Troubles” (not my fight) and just wanted to explore the (mostly empty) streets without getting kidnapped. The pubs were magnificent, lots of friendly and gabby men, who welcomed us once they knew we were Americans. There were no incidents during our brief stay—at least none that were reported—but while roaming around at seven a.m., taking notes, and checking out political posters, I kept my guard up—sort of like walking in New York City in the late-1980s, when crime was ho-hum and most street lamps on side streets didn’t work—since at 31, I had brown hair, a pug nose, pale skin and could pass for a native.

Doug and I returned to Dublin, he went back to California, and I spent time in Cork, and then attempted to immerse myself in the pub culture of Dublin—on this leg I stayed at the magnificent Shelbourne; a walk-in reservation, which would become unheard of just a few years later all over the world—and was successful. Really, order two or three pints of Harp, Murphy’s or Guinness and you were a “regular.” On the last night of my “sabbatical,” I met up with Jim Larkin, in town with one of his kids, and showed him the ropes. As it happened, a potential buyer for City Paper had cropped up, and Alan was glad I was back. The suitors turned out to be flakes—an exceedingly kind description—but just a year later a deal was completed. After the paper was sold, I went abroad for three months, scouting cities for a possible European free weekly. Belfast wasn’t on the list.