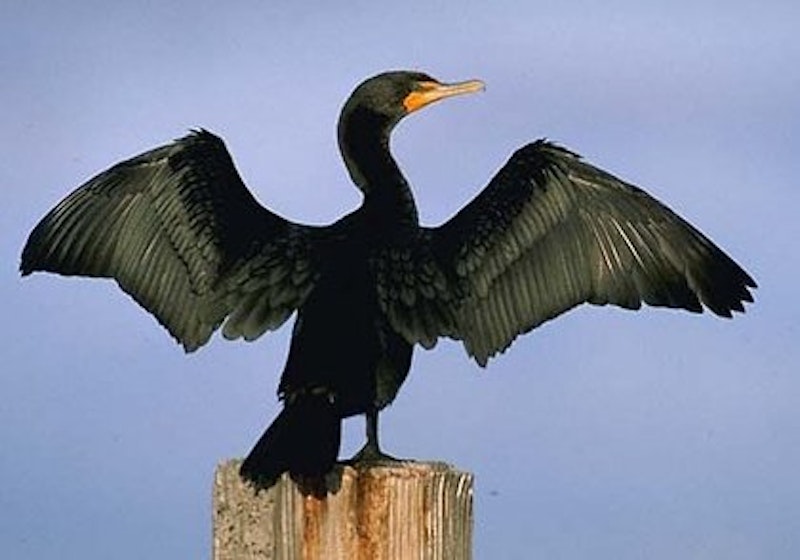 I often encounter birds when I am kayaking. There’s a scoter that never migrated because hunters shot him, but only so that his wings and the feathers on the back of his head were clipped. He lived, but couldn’t fly, and he hangs around, waiting for his feathered friends to migrate back to Tilghman Island this fall. There was the injured osprey my daughter brought home in the kayak trunk. And I recognize a few specific blue herons by their size and hunting spots.

But my favorite sea bird is the cormorant. This majestic black bird dives far under the water; I’ve clocked them at up to a minute, fully submerged, often only feet from my kayak. They aren’t shy. When they emerge from the depths of the bay, they hurl their beaks skyward; the fish they’ve caught flops high into the air and eventually directly down their gullets. Then, since they failed evolution and do not have waterproof wings, cormorants have to perch on a piling and dry their wings. They open them fully and hold them that way for up to several hours until they air-dry. And they start the whole process all over, time and time again each day.

I don’t know what it is about them that I love, exactly. Maybe it’s their persistence. Or the way they accept their situation and thrive in it despite adverse nautical and avian circumstances.  Or maybe it is their elegance and patience as they perch there and simply wait for the their wings to dry.

Others are not so find of the bird.

My almost-21-year-old daughter, the first mate on a vintage sailboat: “I hate cormorants.”

Me: “Why do you hate my favorite bird?”

She: “They crap constantly and it smells awful.”

Me: “Don’t you remember the book Everyone Poops?”

She: “They projectile poop 24 hours a day and the smell is horrific. They’re the worst bird.”

Me: “They hate you too, that’s why they poop in your general direction.”

My 11-year old daughter, world champion birder and member of the Audubon Society: “MOM THEY’RE TRYING TO KILL THE CORMORANTS.”

Me: “What are you talking about?”

She: “WE NEED TO SAVE THEM THE ARMY IS GOING TO KILL THEM.”

Me: “Why is the Army killing them honey?”

She: I TOLD YOU. WE HAVE TO SEND MONEY. THEY’RE GOING TO SHOOT THEM.

And it’s then that I realize the email forward has been sent by the Audubon Society as a fundraising effort. I explain to her that the Army will still kill the cormorants if we send money, and spend 20 minutes explaining fundraising and non-profit marketing. And salmon. Because the problem with the cormorants in Oregon is that they are eating all the salmon and it’s hurting the lifestyles of the fisherman who catch salmon and also mom loves smoked salmon and so does she.

She continues to believe the cormorant massacre is massively unfair. And I agree. Because any bird that has to work that hard for a fish shouldn’t have to die for it.