As Parents, We Are The Giving Tree

Is there ever an end to the taking? 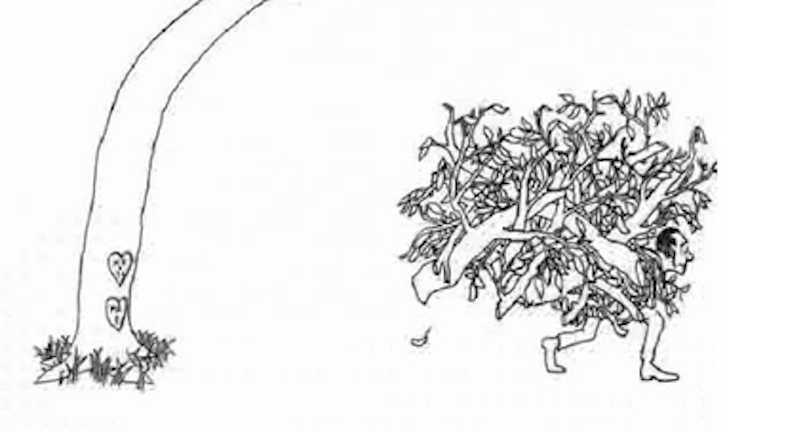 I was talking with a friend one day and we were swapping the usual parenting stories about new teachers, schedule demands, chauffeuring, whatever. For some reason, the book The Giving Tree came to mind. “We are like that fucking tree in the children’s book, dude,” I said. “We just give and give until we’re nothing but a stump.” She agreed, and then we both had to go because we always have to be somewhere and were lucky to find 45 minutes to have coffee.

Reflecting on the conversation later, I realized I hadn’t seen that book in awhile. I think my oldest had a copy of it, but that was many years ago. What the hell was that book about, anyway? I thought. Working on the Internet has its advantages. In any setting, I’m always the one who can find information the quickest; I attribute it to years of practice with keyword combinations. It’s a personal challenge to have what I’m looking for be the first Google result and I’m annoyed if it’s not. Of course, I didn’t have to look far for info on the classic 1964 children’s book by Shel Silverstein. The wiki page is full of good info, including a breakdown of what interpretations of the book have evolved over the years. And I found the animated version featuring the voice of Shel himself:

One school of Giving Tree-thinking is that the book is an environmental story: if you tear down the trees, we won’t have trees anymore. Thin, unsupported argument. Another story goes that it’s a simple story of friendship. Boring. The Jesus contingent says it’s about God’s gifts to man. Eyeroll. And then there’s the controversy of which I wasn’t aware— that the book is an anti-feminist tale of rape and dismemberment.

In her 1978 book Gyn/Ecology: The Metaethics of Radical Feminism, Mary Daly writes that The Giving Tree is:

"The story of a tree—consistently referred to by the pronoun she—who gives absolutely everything she has to a boy. This begins innocently enough, with her shade, leaves and fruit. But the boy grows up and cuts off her branches and her trunk. Finally, in his old age he uses her stump as a seat. As a result of all this nonreciprocated giving, the tree is ‘happy…’ The story is, in fact, one of female rape and dismemberment. It draws upon sources in the Background of female identity, taking the Tree of Life—who is the Goddess—and making her a willing participant in her own mutilation, which makes her ‘happy.’ Her degradation is total, for the Giving Tree wallows in self-destruction. Here is a model of masochism for female readers of all ages, and of sadism for boys of all ages.”

Well, now. I don’t know about all that. Seems excessive. Excessive in the way colossally radical 1970s lesbian feminists pride themselves. Rape and dismemberment. Yikes. But, this line of thinking still exists; Angelina Jolie confirmed that the wing-removal scene in Maleficent was a metaphor for rape.

Shel Silverstein, who lived on a houseboat, hated giving interviews. In 1975 he talked to Publishers Weekly about The Giving Tree, making only a brief statement about the reason for its success: “Maybe it’s that it presents just one idea.”

Besides the environment and God and friends and rape, the other interpretation of the “idea” or meaning of The Giving Tree is the one I can get my head around—that it symbolizes the relationship between a mother and child.

When a child arrives, we as mothers feed it. When it wants to play, we let it climb on us. Across the years, to varying degrees, we give pieces of ourselves to the child. We’re happy when the child is happy—that to me seems like the “one idea” Silverstein refers to, although the relationship is not always as one-way as that of the tree and the boy. We do get love back—from handmade preschool cards and “Love yous” in text messages to rousing commencement address appreciation or Oscars acceptance speeches, moms, and parents in general are often thanked. Children who are taught to be appreciative are more appreciative.

"Totally self-effacing, the 'mother' treats her 'son' as if he were a perpetual infant, while he behaves toward her as if he were frozen in time as an importunate baby. This overrated picture book thus presents as a paradigm for young children a callously exploitative human relationship—both across genders and across generations. It perpetuates the myth of the selfless, all-giving mother who exists only to be used and the image of a male child who can offer no reciprocity, express no gratitude, feel no empathy—an insatiable creature who encounters no limits for his demands."