One Spoke at a Time 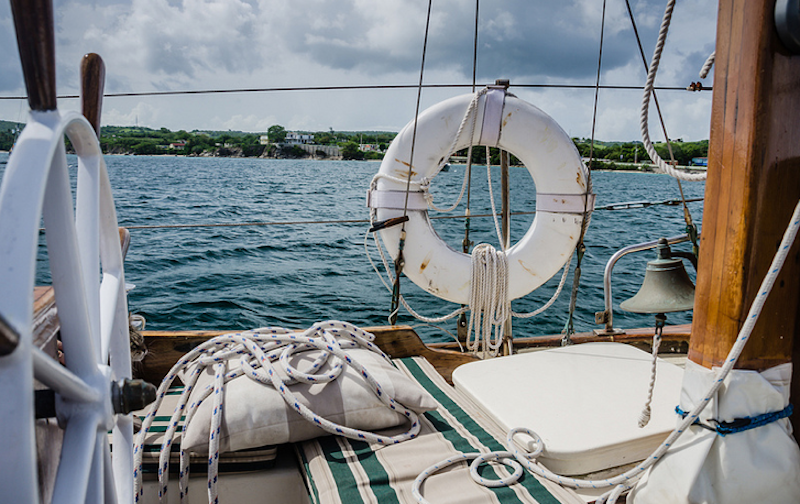 I spent the last year behind the front desk at a marina and inn. Though it was an improvement from my miserable gig as a restaurant hostess, I went home each night exhausted from pretending to care about the dull work. As summer began, I reached out to a charter sailboat captain about joining as a first mate. The positions had been filled. It’d been a shot in the dark, but still I was disappointed. I stayed behind my desk, monotonously taking reservations for people’s vacations.

About a month ago, I found a wounded osprey. The falconer who took him in told me about an opening on the charter where I’d wanted to work. Soon after calling the captain, I quit my job and began training. With no sailing experience, I wasn’t an ideal candidate. Initially I fumbled with knots and cleats, holding on to lines as I staggered around the deck like a drunk. Pulling up the enormous mainsail took a tremendous effort, and tacking the Genoa sail nearly threw me overboard. The charter offers cocktails, which I was responsible for making. Preparing margaritas in the galley of a sailboat is only as difficult as the wind is strong.

After accidentally drenching myself in mixed drinks and enduring some rope burn, the job became easier. I gained enough strength to bring the sail up and down smoothly. I enjoyed chatting with the guests and was no longer terrified that I’d spill cocktails all over them.

Learning the intricacies of sailing made me fall in love with it. A colder breeze has brought denser wind, which moves through the sails more efficiently. Built almost 80 years ago for racing, the boat gracefully glides through the water. When I’m not sailing I work on sanding and varnishing, a rewarding task that I enjoy. Old teak is rich and has far more character than most modern materials.

A few weeks ago I was sitting silently in the cockpit with the captain and a few guests. “You want to drive?” he asked. I laughed until I realized he was serious. He pointed to the antique compass in front of us, encased in brass that I’d polished a dozen times. “See the direction we’re going in? Due north. The wind is slightly east; you’ll feel it, so turn slightly when you need to.” I held on to the wheel, my gaze going from the compass to the captain. I saw our direction changing, and he told me to start turning. I made a few strong revolutions until he stopped me and quickly undid them. “Slowly,” he explained, laughing. “You have to wait for her to respond. Watch the bow.”

I blushed and followed his instructions, carefully moving the wheel. I paused as the boat gradually reacted, powerfully shifting back to the north. “Was that right?” I asked. “Yes,” he said. “Remember, one spoke at a time.” I nodded as I processed these words and, looking up at the huge mainsail, knew I’d never forget them.