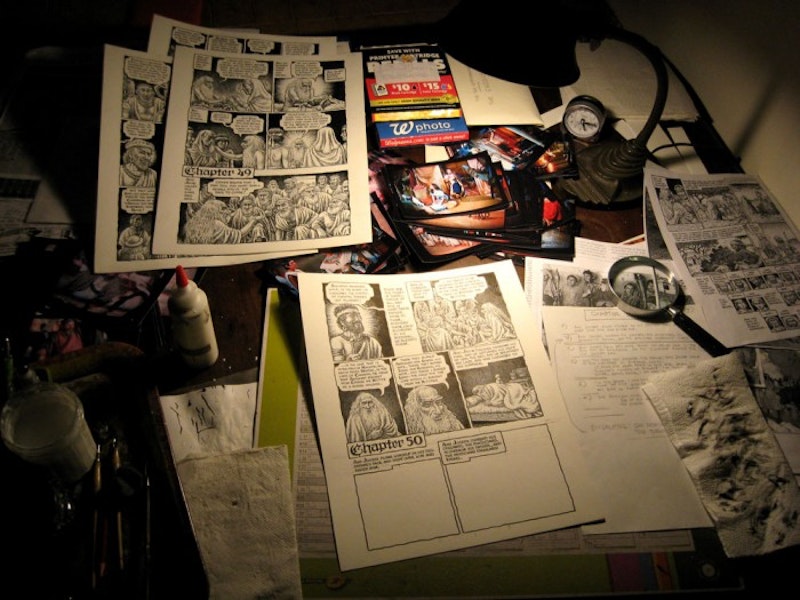 The following is presented with apologies to the Onion and thanks to Slovobooks, the blog that published Alan Moore's farewell email to the world. Moore co-created and wrote V for Vendetta, From Hell and Watchmen, among many other graphic novels and comic books.

Dear Comic Book Writer Explaining Something Crazy: What good is a blender whose bottom screws off? What's the manufacturer's design rationale?—Screw Off

Dear Screw: Having a self-invented and self-constructed dimension-spanning escape craft took care of the balloonist aspect of Upton’s character, and having him arrive on Earth by way of our Arctic Toyland gave us a chance to explain his earthly attire and his Dutch Doll companions.

Dear Comic Book Writer Explaining Something Crazy: My daughter, 9, wants to give away her toys because of the world's poor. Dad and I think this may be a whim and she'll want them back. Any advice?—Diplomacy Called For

Dear Called For: I decided that our re-imagined Golliwog was most probably an escapee from a dark-matter-cosmos slave galley (for which we borrowed a previously established fictional slave-trading alien race who were un-problematically pink and thus fit the intended parallel rather well).

Dear Comic Book Writer Explaining Something Crazy: Who's responsible when an incorrectly parked car is sideswiped?—Settle This

Dear This: His dialogue, which as far as I can tell betrays no racial associations whatsoever, was intended to enhance the piratical, ferocious and more than slightly surreal way in which we wished to present the character.

Dear Comic Book Writer Explaining Something Crazy: IMDB, the fabulous Internet Movie Data Base, can't always be right, can it? I say that's impossible, my brother-in-law says the site is 100 percent correct. You say?—Stay Skeptical

Dear Stay: The tone of the character’s dialogue uses some of the same kind of coinages that Upton herself employed, such as in the Kingdom of “Pankywank.”

Dear Comic Book Writer Explaining Something Crazy: Are nectarines extra healthy, like over and above the other fruit and vegetables? My cousin says so, but she's a nut.—Health Wise

Dear Wise: Why, if our intention was to examine and recreate Upton’s original, would we have sought to make the same racial equation as those entrepreneurs who dressed him in that minstrel outfit in the first place?

Dear Comic Book Writer Explaining Something Crazy: My husband has perfect pitch, something I definitely lack! On long car trips he likes to have me harmonize, but I feel silly. How can I convince him I just want to lend moral support?—Hum Along

Dear Hum: What we actually did with the character was to decide that a character of those non-human squat proportions—which seemed to suggest a great density—and that non-reflective black coloration, might conceivably be a stranded alien entity from that sizable majority of the universe’s missing mass and substance that is hypothetically described as “dark matter.”

Confidential to Waiting and Hoping: It also occurred to me that having the character refer to himself as a “galley-wag” might tie nicely into this escaped-slave construction, while further distancing our reinvention from the racial and racist associations that had been layered upon the name of the original.

—Ask a Comic Book Writer Explaining Something Crazy is a steal of The Onion's “Ask a...” feature, which usually concludes with boilerplate saying the column appears in more than 250 papers nationwide.