On Rupi Kaur’s home body and the popularity of her alternately intense and anesthetic work. 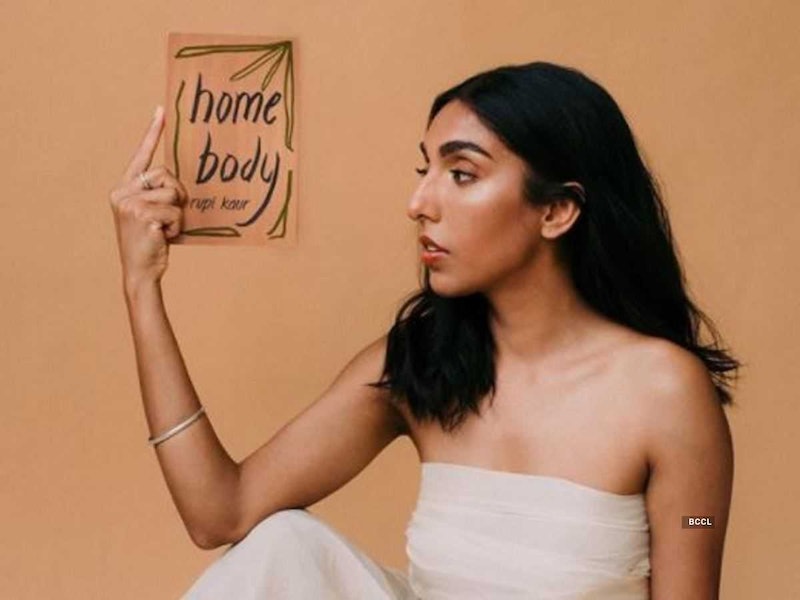 “Household name” sounds hopelessly out of date now, as if we all still learned about pop culture and media figures on the television in the living room on one of half a dozen channels before or after dinner. But Rupi Kaur is famous enough that her name exists in the ether, either recognized or recalling a vague, pulling familiarity. Since the viral success of her initially self-published milk & honey in 2014 (rereleased by Andrews McMeel Publishing in 2016), Kaur has sailed to the top of the heap: “Writer of the Decade” according to The New Republic, one of the BBC’s “100 Women” in 2017, and a constant presence on Amazon’s Best Sellers pages. As I’m writing this, two days before publication and six days before Christmas, Kaur’s latest book home body is at #22 in “Fiction & Literature.” There’s no page for best-selling poetry.

Rupi Kaur is the most famous poet in the world, and the most widely read. Born in 1992, her work is completely contemporary: there’s a jagged intensity to the construction of home body, a book that can be read in 30 minutes that moves from poems about mindfulness to explicit descriptions of childhood trauma with hardly a hint at a transition. Kaur’s work is confrontational not because it’s aggressive but because she doesn’t couch or crop her expression for fear of being judged negatively. So much of home body is ready-made to be “hate-read” on podcasts and social media (I first heard of Kaur on an episode of Red Scare a couple of years ago), but to suggest this is Kaur’s intention is to commit the critic’s sin of projection. I’m merely describing how a situation like this usually plays out.

Kaur’s not afraid to publish a book of poems like this:

but your mind is starving

we already have the things that can complete us

and laughter and connection

i was trying to fit into a system

that left me empty

That last poem, like another regarding transgender rights, feels stamped in at the behest of editors or cultural pressures. Kaur’s work is relentlessly inward and only references external politics once (a poem about the 1984 anti-Sikh riots in India), leaving her sole statement on capitalism to hang like so many of her poems unresolved in the air. She’s fit right into it. Winking towards some sort of vague notion of economic justice inside a best-selling book that would’ve been omnipresent in all bookstores, airports, and cultural centers for the next two or three years is brazen or naive, but Kaur’s primary subject—trauma and its effects—is inherently political.

Kaur’s been criticized for being too privileged, possibly plagiarizing, being a dilettante that doesn’t deserve her fame or success. These things happen when you reach the top of your field: the vampires come out. Kaur addresses this in one poem:

i measure my self-worth

by how productive i’ve been

how hard i work

Whenever someone becomes so famous their name moves between people through osmosis, everyone subordinate to them in their field will hate them. If I spent my life writing blank verse under a tree, reading Tennyson and courting women with Blake, trying to get published, Kaur’s books would make me want to commit suicide. I’d ask myself, and an uncaring world that is not listening: “Can it be so simple? All I have to do is doodle and write five lines about mindfulness? The anxiety I experience? The depression? She’s already covered it?”

Despite Kaur’s popularity, poetry has proven surprisingly anemic even in the age of Twitter and Instagram. We’re so far away from a period in history where a substantial amount of people not only read poetry but also knew how to read poetry. It’s a slower, much less passive form than novels or certainly non-fiction. We’re half a century away from a time when a poem could change the world, and now it’s a miracle that someone like Kaur can get a bestseller out of it.

It’s easy to see why home body is so popular: Kaur’s most specific when talking about her childhood trauma, while offering jejune self-help advice on mindfulness, anxiety, and self-doubt elsewhere. The feminism is standard issue, there’s a handful of good lines (“i am loving myself out of the dark”), and besides the frank sexual descriptions, this could be a book for children. It addresses the same kind of big, vague fears that children’s literature deals with: looming clouds, mighty beasts, evil forces, seemingly impassable obstacles. It’s a world of self-generated chaos and doom, with occasional very real abusers jutting in. Kaur’s work is put together in such an intense, jagged way, making it a bizarre popular success, because this isn’t really that far from Kathy Acker or Andrea Dworkin.