A Mask for Every Self

I’ve become comfortable with my mask shielding my full “self”—I wonder if some men hate that. 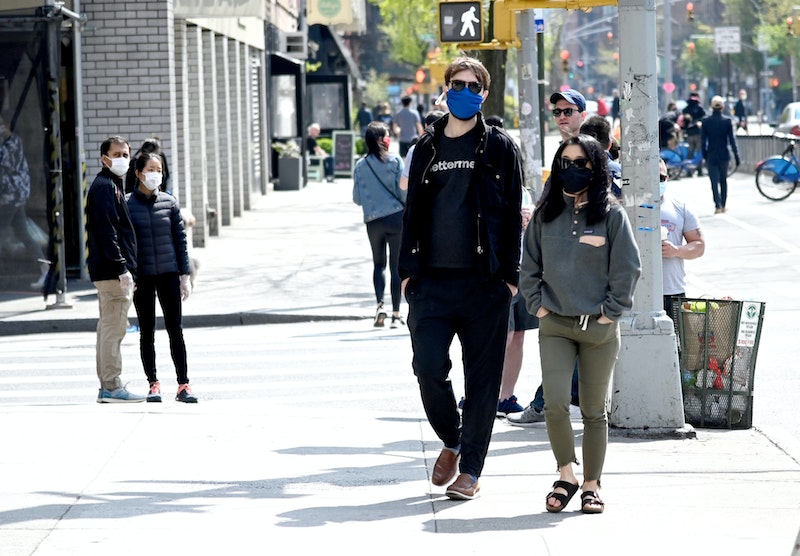 Has anyone else been watching a show they've always watched or a movie they’ve seen countless times, but suddenly as you’re watching it again, something seems wrong? None of these people are wearing masks. Then it dawns on you that we’re living in remarkable times and masks have symbiotically transformed to communicate diverse cultural meanings.

The New York trains and streets emptied at the peak of the pandemic, just to be slowly filled again, only now everyone’s wearing a mask. Not really everyone, and some people just want to walk the streets and breathe in the city’s polluted air, without a mask, in peace. But for the most part, everyone else has their masks on and it’s had a sensational visual effect. While wearing a mask is enforced by policies in countries all over the world, it’s also becoming an accessory in our social world.

Masks have quickly purposed themselves as an additional layer to identity, a form of self-expression. Some of my friends have a mask in every color to match their outfits. My dad wears a Yankees mask. When a bomb exploded in Lebanon this August, I bought my Lebanese friend a beautiful red mask adorned with a hand-painted tree of the Lebanese flag. A new lifestyle brand called LAAMS stamped its name on the side of forest-green cotton masks and all summer, if you were looking, you’d see that forest-green mask on some young skater at Washington Square Park. I always wear a black mask, no decoration or design, and when my roommate does the same, I look at her and wonder if she’s copying my style, or at least my face mask aesthetic.

There’s something ancient about the mask-wearing, even sexual. Let’s imagine 18th-century masquerade balls, one sociohistorical way to trace the existence of masks. Let’s also remember some of the stringent social expectations alive during this era: no women unattended, no openly sexual women, no non-binary women, etc. At these masquerade balls, however, many of the societal norms regarding women and their sexuality were ignored as they explored the freedom of anonymity. The mask concealed women’s assumed identity, allowing them to construct the identity they fantasize. Maybe women arrived at a masquerade ball in hyper-sexual dress, embracing a whore look or maybe they participated in cross-dressing, enjoying their own masculinity. Either way, masquerading existed during those times as a means of anonymous erotic play and release.

Did I bring this up to suggest the aura on the Manhattan-bound L train Monday mornings is the same as an 18th-century masquerade ball? Not really, but this juxtaposition of visibility and anonymity, created by the many faces covered with masks, does replicate the masquerade nature of sexual imagination and gazing but in an everyday and modern context.

Women now are generally more sexually free than, we don't need to publicly disguise ourselves in order to dress or engage with the outer world how we like to, and yet I’ve witnessed and experienced the continual sexualization of women’s partially-covered faces. I’m not a historian, anthropologist or psychologist so I don’t know if all men perceive women wearing masks sexually, but the 18th-century playwright William Wycherley, depicting the connotations of a woman wearing a mask, said:  “A Woman mask'd is like a cover'd dish, giv[ing] a Man curiosity, and appetite.” Wycherley articulates the objectification of a woman’s masked appeal and I’m observant enough to see these words manifest in 2020.

I don’t know the root of men's centuries-long fascination with dehumanizing women. I do know I’ve been told on the street, “I bet you’re even prettier without the mask,” and maybe I am, or maybe I’m not; that point is moot, it's the power and authority these men grant themselves to decide. I’ve encountered men telling my girlfriends to lower their mask for a chance to see the rest of their faces. Is it romantic? Is it corny? Usually, it’s just creepy. I’ve even once had a young guy pull my mask down, while keeping his on, and say he wanted to see my lips while I talked. Ironically, he wasn’t happy to see my lips telling him to fuck off before I pulled my mask back up. He walked away, his mask leaving him unaccountable in the confrontation, mine making me feel unnecessarily targeted.

I’ve become comfortable with my mask shielding my full “self” from the rest of the world. In efforts to keep ourselves safe and healthy, we've also privatized our faces; generally the one part of our bodies we haven’t had to grant people special access or proximity to see. I wonder if some men hate that; the distance between themselves and women.