If we are what we eat, then surely we are also what we dream. 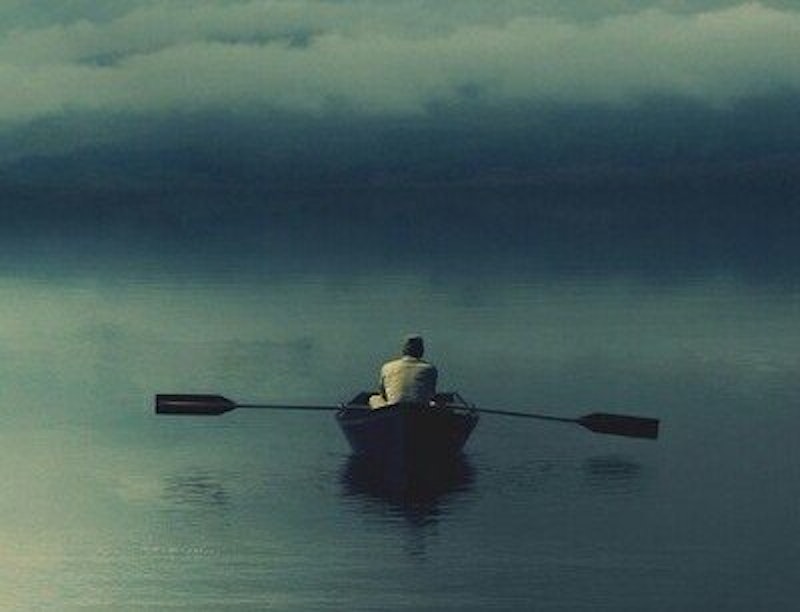 The song “Row, Row, Row, Your Boat” is a hypnotic ditty widely believed to be of American minstrel origins as early as 1850. It was first recorded in 1881, and became one of the most enduring children’s songs since then. It’s one of those mindless tunes that rolls around in my skull pan like a Mobius strip, or a 45 rpm record that skips at the end, life is but a dream, life is but a dream, endlessly. As a kid, I had it on a yellow vinyl 45. I played it every day. Probably why its seared into my psyche. I recall the B-side was “Oh Dear! What Can the Matter Be?” A boring English ballad from the 1700s that became an insipid nursery rhyme. It’s about a boy named Johnny who stayed at the fair too long and forgot to buy blue ribbons for some girl’s hair.

The concept of being in a rowboat, merrily rowing along is pleasing. The idea that life is but a dream is appealing, too. Also the fact that we can row along to a four-part harmony repetition that goes nowhere. Sometimes I daydream that my rowboat is a lifeboat that floats aimlessly on a sea of ever changing waves. Sometimes rough, other times a calm mirror image. At intervals picking up survivors lost at sea until my boat gets too crowded. Then somebody’s got to go. Like the 1944 Alfred Hitchcock thriller Lifeboat, adapted from a John Steinbeck story. The premise revolves around several survivors of a torpedoed ship who are all stuck in a lifeboat, along with the U- boat captain who sunk their ship. Ultimately the Nazi must go. The moral of the story to me is: you can’t trust anyone. Especially Nazis.

I also cherish a scene from the Marx Brothers’ Horse Feathers. Groucho’s character, Professor Wagstaff, is having a romantic boat ride on the lake serenading his love interest played by Thelma Todd. She accidently falls into the lake yelling, “Help! Dr. Wagstaff! Please throw me a lifesaver!” Groucho reaches into his shirt pocket revealing a roll of Lifesavers candy, takes one out of the roll and tosses it to her.

We dream the dream of life, sort of like Hamlet did. There’s that fly in the greasy ointment we generously apply to our life. Living without dreams is static  boredom, like watching the hands of a clock. Daydreams are exciting and essential to get through my day. Passing the time in thought or just thinking about stuff. Contemplating pizza, donuts, dollars, important things like baseball, terrorism, or the weather, possibly different types of shoes and boots. There’s so much to consider in a day or a lifetime. They shouldn’t be wasted on negative energy, bad thoughts, stinking thinking, or the politics of daily bullshit.

If we are what we eat, then surely we are also what we dream. Like making a wish while blowing out your birthday candles, cracking a wishbone, or blowing on dandelion seed puffs as they float in mid-air, wishes can come true too. Not always for the better, but for whatever reasons we dreamy humans need something to believe in, always hoping for the best. Dreams are the stuff of sleep, but daydreams are the gold standard for killing time. It keeps the nature of drama and intrigue alive with illusions of the good, bad, and indifferent. The masks we wear to portray the personas of who we think we are, projecting onto others who believe they know who we are, and who they believe to be. It’s lamebrain to accept the norm as real and fake as fraud.

Dreams sustain life. Without them we could not exist. It would be a zombie robot life. Do mannequins  dream? How about dogs, cats and other critters? The dreams of whales and worms. No one really knows. I like to believe all creatures share the universal dream of life. We are born into this messy world, into the chaos of civilized society that some call a nightmare. Dreams of the past and present melt together to form bright moments we measure in time. The tick tock, metronome and heartbeat of drums, footsteps, and dripping water. The pounding waves, pouring rain, or throbbing blood that flows through our veins like rivers and drifting sands. The bat, bird insect, angel wings flutter as fish fins flap and fingertips snap. Time can be filled with noise or silent as snow. Our dreams cultivate this pearl of thought in sound and vision. Never changing, yet always different ways of seeing and believing. Whatever floats our boats. We are all on the same leaky yacht still afloat, sinking fast.

There was a dream once shared by the world. Of once proud, always bold people, filled with chance and daring heroic deeds. There was a time when we shared a world vision of a magical place where dreams come true. A fair deal in a land of opportunity. An immigrant song where a person with a pocketful of pennies could amass a fortune and become king or queen of the castle. A place of bountiful resources and quality-made products. A country where all are equal and have a say in what matters. A land of plenty where no one goes to bed hungry without a roof over their head. Where ingenuity and know-how made all the difference. When your paycheck meant more than mere survival. Where the customer was always right and people came first.