Peek Through the Pines, Part 1

There’s a certain sinister serenity to those woods. 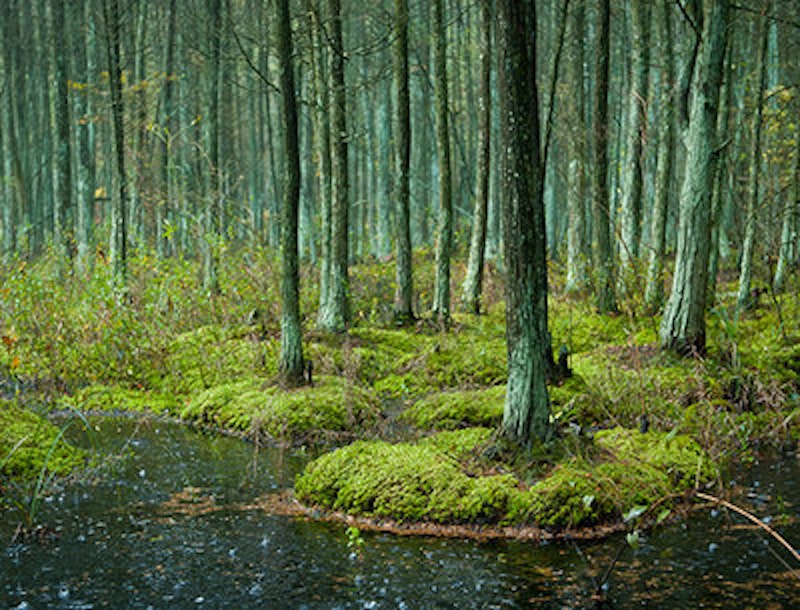 The New Jersey Pine Barrens is my first choice for getting away from the unending shrieking horror of what passes for civilization these days. There’s a certain sinister serenity to those woods, with their quietly flowing rusty rivers and gently whispering stunted pine trees. A good friend from my circus days is home on leave from a large touring spectacle owing to burnout. Nothing to do with drugs or any sort of unprofessional behavior. Sometimes you just need to take an extended break. He’d never been in the Pines, despite having grown up in Jersey, so I invited him down to explore, get stoned, drunk, decompress and enjoy some of the local color.

People outside the entertainment industry tend to harbor the notion that touring is all fun, groupies and drugs: “living the dream.” It definitely has its moments, and very few things are as rewarding as getting paid to do something you truly enjoy. It’s also extremely hard work, often underpaid, and the schedule is grueling. Sleep deprivation is the number one issue. Lack of sleep is the main reason why so many roadies are dead by 60. It certainly isn’t lack of exercise.

Personal chemistry is another big issue on tour. You’re basically cooped up on buses, trains, planes, and hotels with the same people for an extended period of time. It’s easy to fall into a cabin fever mentality. After a few weeks on the road together, you can grow to hate someone simply for the way they chew their food. Keeping a cool head is vital, which is one reason why roadies tend to smoke a lot of pot. It’s really the only thing for anger management. The beer consumption functions to relax the big muscles and induce sleep in a fairly predictable way without the lunatic side effects and hangover of pharmaceutical garbage like Ambien or Halcion.

I’ve written extensively about the Pine Barrens in the past and have no intention of rehashing it here. The best source of information remains John McPhee’s 1968 book, The Pine Barrens. It’s a must-read for anyone planning to visit the place.

My friend Will, like me, has a powerful attraction to independently-owned motels. He appreciates the truly dreadful when it pops up as long as it doesn’t involve venomous reptiles or bugs of any kind. I’ve yet to actually encounter a venomous reptile in a motel room, but have checked just to be sure in a few of the sketchier places. On the fringes of the Pines there’s an abundance of weird little motels, mostly cheap decaying shitholes with broken toilet seats and air conditioners that sound like a washing machine full of nuts and bolts. There have been times when I’ve heard angelic music in the sound of a dying air conditioner. You have to insist on inspecting the room before you actually shell out for it. Bedbugs are still an issue on the motel circuit. Also movie theaters, but you hate me now for telling you that, don’t you?

To my mind, the most interesting motel in the general vicinity of Leeds Point, my usual anchor to the Pines, is the Ten Acres Motel in Galloway. The reviews you get online are inspiring, stuff like, “THERE WAS BLOOD ALL OVER THE WALLS…” and a lot of classic urban legend crap. There’s even a zero-budget horror movie about the place. It’s also a short slow ride up Route 9 to a sandy road through the tall marsh grasses, signage advising of turtle crossings, to a splendid seafood restaurant at the docks that serves the best crabcakes I’ve ever eaten, and I’ve been eating crabcakes since about 1958.

Will picked me up at my cousin’s place late in the afternoon and we headed down the Atlantic City Expressway at a reasonable and legal clip. We caught up with each other on stuff you don’t discuss on Facebook and swapped jackpots until we exited at Route 9 and hit the Ten Acres. I’d last stayed there with Daisy back in 2000. At that time, the adjacent house was bright pink and it was ringed by lawn ornaments of every shape, size, and description. It remains pretty much the same. The lawn ornaments seem diminished in number. There were only a few construction company pickups and a sedan in the parking spaces, so it looked good.

The office was closed. The vacancy sign was on. There was a phone number, and Will called it. Straight to voicemail. He left a message and we rolled to the Oyster Creek Inn.

There’s no filler in an Oyster Creek crabcake. The spicing is subtle and the local crab is the most delicious of all meats to me. This crabcake is in every way perfect. Between the two of us, we ate eight of them. Out on the dock over the salt marshes we smoked cigarettes and drank coffee in tranquility and silence, Atlantic City’s profile in the distance gleaming pink in the sunset.

We drove past the Ten Acres again and stopped. That was when Will mentioned the acid.