We Will Save You

Three Kings and getting it right in Iraq. 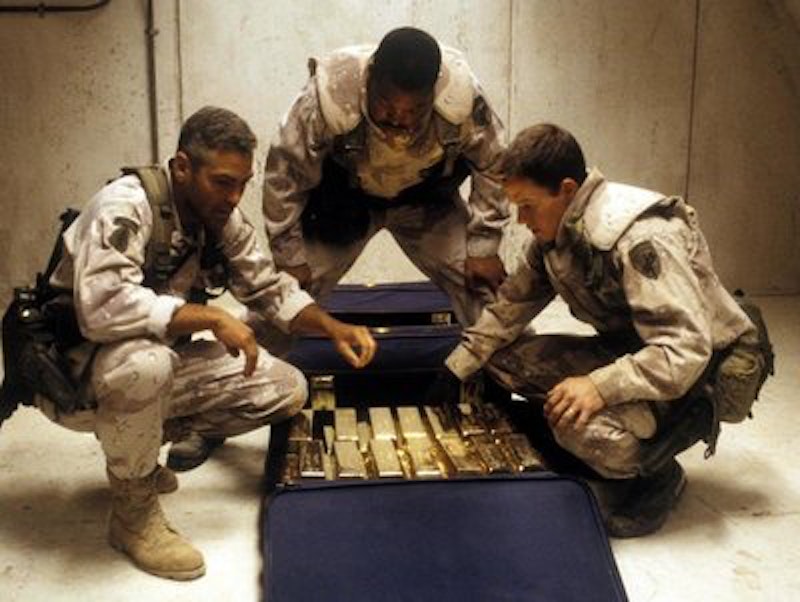 This is part of a series on latter-day U.S. colonial wars. The last installment, on Full Metal Jacket, is here.

A roguish and charming greedy philanderer is confronted with a terrifying oppressive dictatorship, and unexpectedly develops a conscience. At great risk, he sets about saving those he can. By rescuing a handful of people from certain death, he affirms the essential goodness of humanity, inspiring us all—and especially American audiences.

That's the plot of the acclaimed Schindler's List (1993). But in the Hollywood way, all successful films are imitated. So the concept was dusted off, moved to Iraq during the Kuwait war, and sent out into the world as the acclaimed Three Kings.

There are some differences in the films. Schindler's List is a dour, sweeping epic. Three Kings is a humorous heist film. Just after the end of the Kuwait war, soldiers Archie Gates (George Clooney), Troy Barlow (Mark Wahlberg), Chief Elgin (Ice Cube) and Conrad Vig (Spike Jonz) find a map to Saddam Hussein's stolen Kuwaiti gold hidden in the rear end of a cowering Iraqi. The four go AWOL to find the gold and expropriate it for themselves.

To the extent it’s not Schindler's List, the film is a cheerfully bitter critique of the American war effort. The soldiers are presented as casually racist opportunists; they call the Iraqis "towel-heads" and terrorize and humiliate them with bored disdain. George H.W. Bush encouraged the Iraqis to revolt against Saddam, but after pushing Saddam's forces out of Kuwait, the U.S. abandoned the rebels. Gates, Barlow, Elgin and Vig just shrug when they see Saddam's troops beating and harassing women and children. They care about Kuwaiti bullion, not the people—a not very subtle metaphor for America's own prioritization of the black gold in the region.

The film's cynicism here seems promising —but the script is unwilling to stick to the plan. The Iraqi soldiers foolishly shoot a woman right in front of the American thieves, and as the woman's young daughter wails in agony, Archie abruptly grows a conscience. Breaking the post-war ceasefire, the Americans attack Saddam's troops and escape with many of the terrorized civilian rebel sympathizers.

The second half of Three Kings is not about cynical Western assholes robbing the Middle East, but noble Americans swooping in to aid the oppressed Easterners. The final scene is centered around familiar tear-jerking moral recognition. Arrested by the army just before they can take the Iraqi refugees across the border to Iran, Archie exchanges glances with Barlow and Elgin, who each nod subtly. He then reveals the location of the buried gold to his superiors in exchange for the refugee's safe passage. George H.W. Bush may have chosen lucre over lives; Three Kings re-writes American foreign policy. The Iraqi inquisitor whose son was killed by American bombs shoves oil into Barlow's mouth, but Barlow accepts the critique and doesn't kill the guy when the tables are turned. We are, after all, good people. We’re not Iraq's oppressors, but collaborators with its inhabitants in happy Hollywood endings. Even the United States government isn't all bad; it eventually discharges our heroes honorably, prodded by the courageous news media. American individuals, soldiers, and institutions may stumble, but they’re fundamentally decent in the end.

Even in 1999, the feel-good ending rang hollow. The film frames the events as if they were real—there's a coda in which we learn about the civilian happiness of Archie, Chief, and Barlow, like many a "based on a true story" narrative. But this isn't based on a true story; there was no escape from Iraq for the rebels following the Kuwait war, not even for the small number saved in Three Kings. The film is a bullshit self-aggrandizing fantasy of American goodness, nothing more.

Just how self-aggrandizing the fantasy was, however, didn't become fully clear until after 9/11. The message of Three Kings is that America, despite its own indifference, ignorance racism, and greed, could’ve, and (magically) did save the Iraqi people from the ravages of their government.  The 2003 Iraq War was essentially an effort to make Three Kings come true; the George W. Bush administration explicitly framed the war as an effort to rectify Bush's father's tactical and moral failure. The oppressor, Saddam, would be removed. Americans would be hailed as friends and brothers, just like Archie and company. The white saviors would rescue everybody—and even better than in the movie, with the help of a compliant democratic Iraqi government, those saviors would get to keep that treasure too.

It didn't quite work out that way. Instead of George Clooney having a moral apotheosis and shuttling Iraqis to safety, he basically started shooting at random, and then all those refugees got killed in the crossfire. Refusing to help the Iraqi people in the first Gulf War was callous and resulted in gratuitous death and suffering. Coming back to undo the harm and save them all, though, turned out even worse. Whatever you think your motives are, sending heavily armed troops to a place you don't actually care about as a kind of adjunct to treasure hunting is, it turns out, unlikely to benefit the people who live there.

Yet, despite many lessons in the value of restraint, the Holocaust and World War II continue to provide a script for American intervention that seems unbreakable. We’re always the rescuer, like Schindler, sweeping in to save the marginalized innocents from the camps. Those innocents are never exactly center stage; they may be allowed an impassioned speech or two, but they don't get top billing. Their stories are not really their stories, after all. The suffering of the persecuted is simply a convenient device to call Americans to their own essential goodness. The Iraqi woman must be shot so that American men can raise their weapons and shoot other Iraqis in righteous sorrow. The lesson we’ve taken from World War II is that intervention is a way to feel good about oneself. And Americans, apparently, need to feel good about themselves over and over, all around the globe.