Look, it’s just an idea, hear me out. 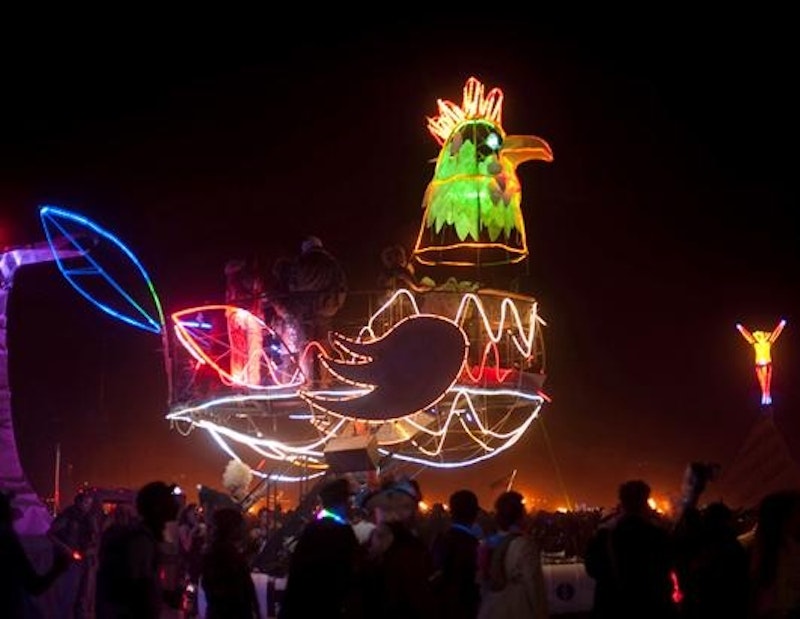 I’m thinking of going to Burning Man. When is it? The summer right? Probably… I feel like I’d be in good company. Entrepreneurs, geniuses, eccentrics, musicians, magicians, carnival barkers, snake charmers, people that can summon fire… those are my people.

Seems like a place where idiosyncrasy is celebrated and difference is a virtue. Plus they have cool feathers and light shows and lots of drugs (though I don’t indulge anymore). Maybe I could sell some patents or make an initial public offering at Burning Man. Fuck the Stock Market. Dow Jones? Oh my God, give me a break. So boring. It’s up, it’s down, Jesus. Who cares?

All the same anyway… fake money, fake news… I just want to meet Elon Musk before he gets assassinated by the Branch Davidians. They’re still around right? Or did they die with David Koresh? “Davidians”… that’s some fucked-up shit. Believe you me, I’d never start a cult—well, okay, I won’t go that far—but I definitely wouldn’t make my followers take on my own name. A little presumptuous and pretentious. However, I’d keep them on 24-hour-call for sudden summonings and teachings and lectures. People have got to learn. They have to be educated.

I’m a teacher, I’ve given lectures, I can impart valuable wisdom to lots of people. But I just need a platform. Digital platforms are obsolete; Ludditism is on the rise. In less than a decade, people will be throwing their smartphones into rivers and starting jam bands and building trolley carts and growing facial hair and getting in convoys to go into the desert. That’s why I have to get to Burning Man quickly, before anyone else.

I want to meet Elon Musk. He’s strange looking and makes people suspicious, just like me. I feel like we have a lot in common: Pioneers. Scientists. Famous. Ageless. Though I’m not at all interested in cars, or outer space—what’s with that? What’s out there? Nothing. You’re looking for nothing Spaceman.

Ah, I’ve been putting off preparing dinner for Monica and me for too long, I should really get started on the gazpacho. I will say this though: don’t trust anyone who isn’t skeptical. That’s one step away from being incurious, uninterested in being challenged or learning. I’ve been able to sustain a positive state of mind and good work habits by abiding by a series of Valid Truths that I’m not at liberty to discuss in public.

I’ll take a cue from Quincy Jones and shut my beak now. Motherfucker revealed too much, as he would say. Kennedy’s killer? Shit, he won’t make it past May. But I think I have another century or two to walk this Earth. I know that makes my wife nervous—only two!—but you have to keep your claws on the ground. Not in outer space, you freaks. Now if you’ll excuse me I’ll have dinner with my wife.