Rooster in the Roses

A letter to a friend in captivity. 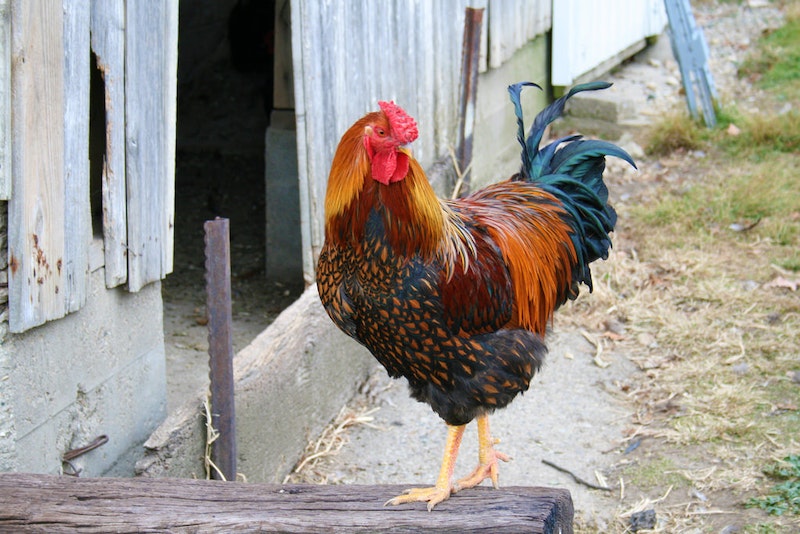 Rosetta Stone is failing me. Who can I turn to? I tried to watch the debate between Macron and Le Pen the other day, but got lost in fantasies of spur-clawing that viciously racist blonde until she’s Ray Charles. I can’t stand her! Hiding all that horrible Islamophobia underneath that smoky voice that gets certain op-ed columnists hard as a rock. So disingenuous of her—and the plagiarism! Feh! Who would’ve thought of such a thing, in the year of our Lord two thousand and seventeen? Post-racial much? Guess it was a sham. Oh well. I’m prepared for battle.

I’m a member of the #Resistance. I’m woke now, and so is my wife. But my cousin Bennington? Nothing more than a common barn animal, with no sense of decorum or decency around civilized people like me. He’s a blight on the Quibbits name. We’re all very happy that his involvement with the Trump campaign last year slipped by unnoticed by the press, but perhaps we overestimated New England’s interest in politically-active roosters. Sometimes it’s better to fly low and remain unknown. It’s even better to hoard a publisher’s advance and lead them along for a year while “making progress” on my debut novel Always a Stone. Things got complicated last year. People got hurt. People died. I almost didn’t make it. It was Bucky that saved me from Cuban exile in the end, and I’ll always be thankful for that hunk of metal that took me across the Atlantic back home. But I still haven’t gotten over our imprisonment in Trump Tower (formerly White House North). Forget about going to New York for a weekend—I’ve barely left the house in five months. Monica is getting on my case—“You yell. Why do you always yell?” Agita. I have agita from all the traumatic experiences I’ve been through in the past year. They call it PTSD now, but that’s not for me. I don’t even know how to pronounce that word. What is that?

I took a walk the other day. We have a path, off by the pond… ownership of the property passed to us after the Bishop died last fall. I didn’t go to the funeral. I didn’t even know he was dead until yesterday. Went to pay the rent, say I appreciated the lack of nagging, and there was the Bishop’s wife dressed like a ninja crying alone in the window. Sitting still, making no sound. Seeing nothing. She’s gone blind, they told me. From the trauma. People these days.

For once I felt safe outside. The moonlight was leaking over the pond and I could see his face. Rawhide. A skeleton won’t remain when they’re done with you. Acid wash, acid baths. You could’ve suggested I avoid taking beat poetry classes but I ignored you, and now I’m woke. Awesome, I love this. Finally getting the attention I always wanted—free press for Always a Stone all over Twitter, hyped by rose emojis and whales—but now feel I never deserved it. My beak is sharper now. I could’ve pulled you out of that restaurant, your bloated face. Floating, alone, trapped in some isolation tank in Northern Virginia. J.A.B. You used to call me sadness. I used to call you fear. I never blackballed you. I hope you know that.

Monica and I kept some of your things but we sold most of them. You understand. Hope you get out someday. Maybe the socialists will help me. Who runs your Twitter? My people will get in touch your people if they’re still employed. We’ll see soon, my friend. Remember: boys don’t cry.