RQ’s rough ride back to the mainland after an unpleasant stay in Cuba. 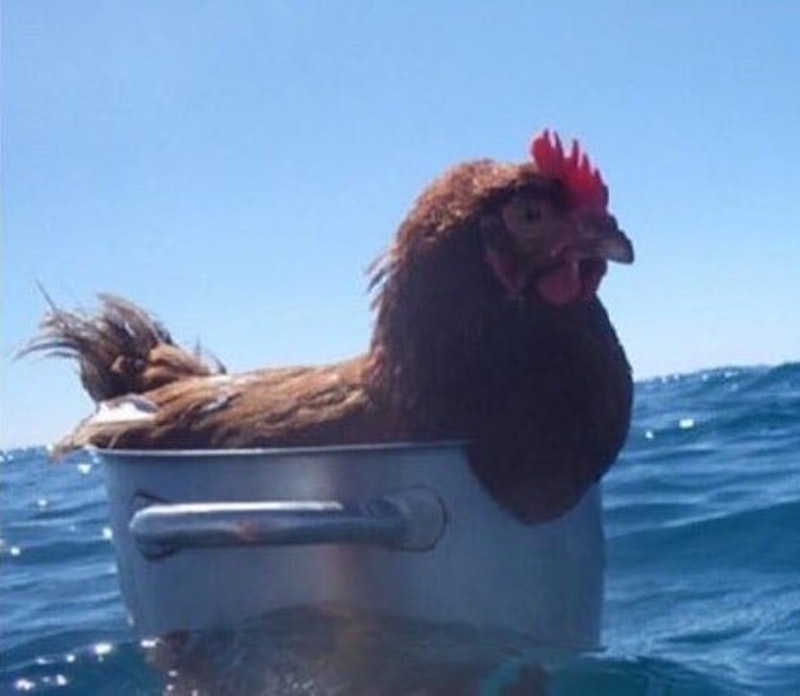 Does anyone remember that movie Waterworld? Kevin Costner drinking his own pee on a ramshackle raft in the middle of an endless ocean? Filtered, of course—fancy! I wasn’t graced with such luxuries on my way back from Guantanamo Bay. I had to ride home in a bucket. And it wasn’t free! I thought I had a spot on the refugee submarine (they have their own economy. The sub had first class. Don’t… don’t believe the hype), but there was no room left. I’m kidding; I was discriminated against. Political prisoners, terrorists, and innocent families alike all boarded this glistening thing at 5:30 in the morning and I got shafted by the swim attendant (blonde, by the way. Very luxe service). I spur clawed the shit out of her exposed heel and hightailed it out of there dodging bullets and shoes, but made it into the night clutching my hack inside of a clam shell. I slept with my eyes open until noon. Then I found my Wilson. It was a silver bucket. He was sitting there beached and shiny, without a speck of rust. I named him Bucky, and he took me all the way back to the mainland.

It wasn’t easy. We endured storms, choppy waters, urchins, sea lions, otters, miniature whales, bass, salmon, and sharks. The worst were the otters. Such arrogance. Gorillas of the ocean. But by day seven, things had mostly cleared up, and me and Bucky had a steady supply of freshly caught oysters to get us through. I fed Bucky through his toothy mouth in between the Home Depot logo and his lower bolts. He started talking on day eight. We had long stretches of conversation on politics, philosophy, whether or not Brexit was a good idea, and how many bags of high quality feed we could get as the pound collapsed. Bucky and I need our grain. The next day we saw the face of God in the cloudscape and we wept along with the sky. He was disappointed in us and we didn’t know why. I asked Bucky what was wrong, why was God crying? “He doesn’t think we’re going to make it, Rooster.” That’s when I bucked out of Bucky and launched myself out of that thing, that ungrateful husk. Fuck him. I swam the rest of the way. I woke up in the hospital three weeks later.

Everything had blown over. Anthony Weiner’s death was pushed out of the news just like Chandra Levy after 9/11. “Ultimately, we can’t conclude that this was a homicide, or that foul play was even involved.” The sweetest sounds I ever heard throughout my junked-out stay at First Methodist, sedated and pumped full of amino acids and essential fluids through an IV. I met so many wonderful nurses. The doctors were mean. Bucky came back to visit me but I showed him the door—he’d rusted over orange completely. The Heavens presented himself to me but I was too high to talk to God. Then I turned on the TV and heard about Brexit, and scrambled for the nearest smartphone to place my feed orders. But someone even more orange than the bucket appeared fixed on the TV behind Farage. John, something? Another day… now’s my time to steal some medication.