Afternoon at the British Insult Clinic

An art form is passed along. 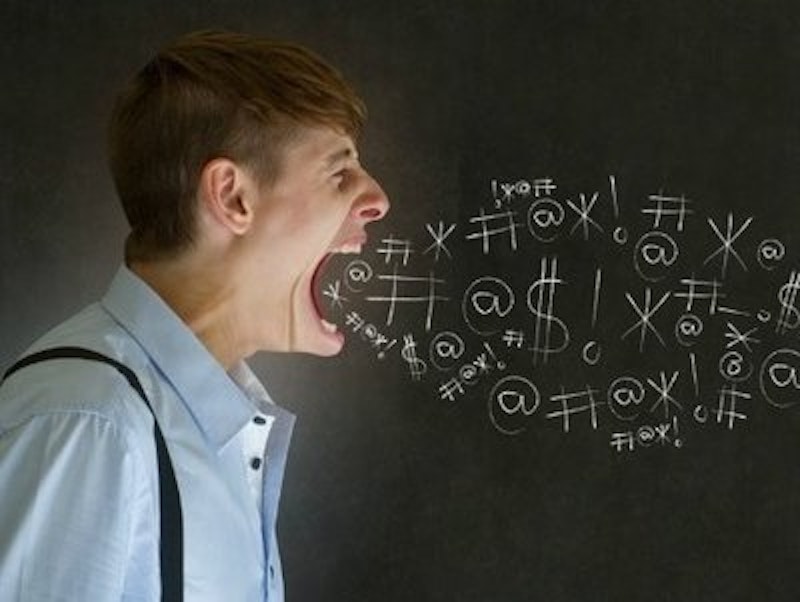 “You phlegm-spewing orthogonal shit muncher…” No, that’s not right. “You side-polished inverted clit destroyer.” Well, better, but why “side-polished”? Why “inverted”?

“You hairy-palmed thatch-wearing Yeti.” That’s for Boris Johnson? Okay, that could pass. It has the rumpty-dumpt sound. Yet the words all belong where they are because of their meaning. It scans. He’s a big fellow, Johnson. He shambles and, yes, that’s some heap of hair atop him. And if he’s hairy-palmed, then he’s a wanker, which is plain because look at him. But we’re not using the word itself and I like that twist.

“Clot-swallowing appliance-faced pain nerve.” Hmm. For Nigel Farage? Hmm, all right. But “clot,” the word must do much work there, must it not? Do you see any other word that indicates bodily grossness? The load falls here alone. There’s a boldness to that. “Clot” doesn’t call to mind semen so much as blood, so we don’t go the usual nozzle-gobbling route favored by the genre. Instead the word implies menstrual flow or medical wound. Now, this divagation from custom tickles me. But I think others might find it a dodge of basic rules.

But “appliance-faced”? Just fine. “Pain nerve” too, I like the finality.

“Diaper-breathed yellow-licking bowl swiller.” Excuse me, I think you have overheated. First, it’s better to attach an individual to a given curse-string. Here you seem to be floating free, venting a spasm. Painting, I might say, a mood from inside your head. Well, I take some responsibility. If one is counseled to think of physical grossness, one plunges the dial to the extreme. This drops one into a state, or can. You have seized up and are chanting out the private image that sickens you, like an oracle chanting hazards. Diaper and yellow—well, I can guess what kind of yellow. We know what kind of bowl the fellow with the diaper breath is swilling, and the bowl’s insides are yellow.

Really, we just need to stick this onto a person. Then it’ll be a full-fledged British insult and not a revealing turd from your inner consciousness… Iain Duncan Smith? I think our work is done.

DVD corner. How did Doug Kenney die? Drunk Stoned Brilliant Dead, the fine documentary about Kenney and National Lampoon, quotes a friend who says the cliff where he fell had a sign saying not to go beyond a certain point. She figures Kenney had to go right up to that point, and naturally that was too far. A Futile and Stupid Gesture, a biography of Kenney, says the cliff in Hawaii looked more solid than it was. “Had he viewed the rim of the overhang from below, Doug would have seen that it was comprised of loose brush and roots only two feet thick,” the book says. Kenney made a career of looking at things from underneath. Here he didn’t. That may be a big thought or maybe just medium size.