Gardening for all ages. 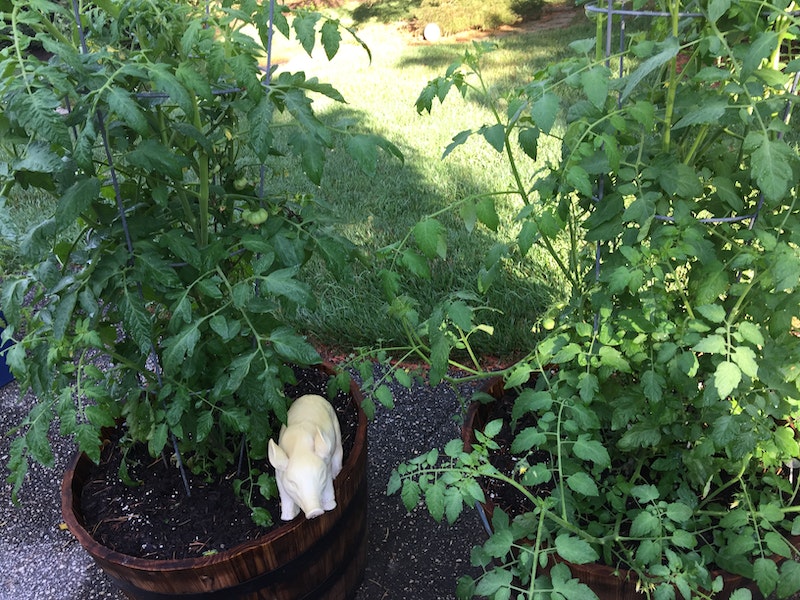 One of my favorite columnists—there aren’t many, I assure you—is Hugo Rifkind, the Scottish-born journalist who writes for The Times and fortnightly for London’s Spectator, which is indisputably the best English-language weekly. A few weeks ago, after riffing about approaching middle age—nearly 40, Hugo’s already there—and caring more about politics (“Maybe, as a white, middle-class man… I am simply beginning to behave in the manner in which white middle-class men in middle age so often do. Which is to say, by erupting into paroxysms of bewildered angst and rage whenever I encounter a bit of the world that threatens not to behave precisely as I want it to.), Rifkind confesses to taking up gardening. He’s not sure he’s cut out for it.

As it happens, gardening is now a hobby at my own household in North Baltimore—in the city, but with a modest-sized backyard that has lots of trees and shrubs (a dozen shades of green that are particularly spectacular this time of year, especially when the sun comes out after a thunderstorm), rabbits, squirrels, raccoons and birds. Less desirable is the very occasional rat: about a month ago, in a spring here that was 40 consecutive days of rain, one morning I found a dead rat at the bottom of the stairs leading to the outside door of the cellar. I’m no stranger to rats, and am not particularly bothered by them, so I got a paper towel, picked up the rodent by the tail and chucked into a neighbor’s bushes. Not very sporting, I know, but a sin of quite low severity.

Anyhow, last year my sons and I, plumbing our collective creativity for a Mother’s Day gift, flipped our lids and eschewed the usual jewelry/handbag route and outfitted my wife with potted herbs, tomato and pepper plants and a blueberry bush. It was a hit, even though we didn’t know what we were doing in caring for the vegetation, and watched as various varmints ate the modest fruit that eventually adorned the plants. As an advance call last month, Melissa made it plain that we ought to repeat, so my son Booker and I spent an hour or so at Green Fields Nursery, a local institution that’s a model of how to run a small business. (Despite the disappearance of so many “bricks and mortar” retailers, I’d say that nurseries are nearly impervious to online shopping, although in five years’ time that may turn out to be a faulty statement. It still bewilders me that anyone would shop for clothes via the Internet—I could never buy a shirt or even pair of socks without examining the goods in person, and who wants to bother sending back items that don’t fit—yet that shift is in full gear. Not that many people purchase suits or neckties anymore, but just the thought of laying out $500 for a seersucker number after looking at a screen mildly freaks me out.)

Melissa’s the first to admit that her thumbs are black: once, around 1990, we had a rubber plant inside the loft that required almost no care, and within six months it had drawn its last oxygen and was bequeathed to the dumpster behind our building. But, like Hugo Rifkind, she’s now middle-aged, and apparently that youthful affliction has miraculously reversed itself, for she took over the tomato (and cucumber and herbs) duties, did some modest research and, as the picture above shows—with the clay mascot Salami presiding—the plants are growing at a rapid clip. Who knows, there might actually be a yield later this summer, since Farmer Melissa, as she now calls herself, has calculated the correct height of the wooden whiskey barrels holding the cargo that’ll thwart those squirrels.

Mind you, this is strictly for fun—and we all get a kick out of seeing the garden thrive—and thankfully we’re not reliant on the menagerie for actual food. And, in another modern twist of life that isn’t to my liking, produce of all kinds is available year-round, as opposed to my Long Island youth, when you took what was in season. Summer was a windfall, with plums, corn, watermelon, peaches and tomatoes in abundance from the local farms, and then in fall there was a small window for my favorite fruit, McIntosh apples. Winter was mostly barren, save for grapefruit and oranges.

Still, if we’re lucky, there will be a two-week period in August when our salads are spruced up with homegrown cherry tomatoes, and that’s not an immodest middle-age pleasure.