Consider them the canary in the coalmine. 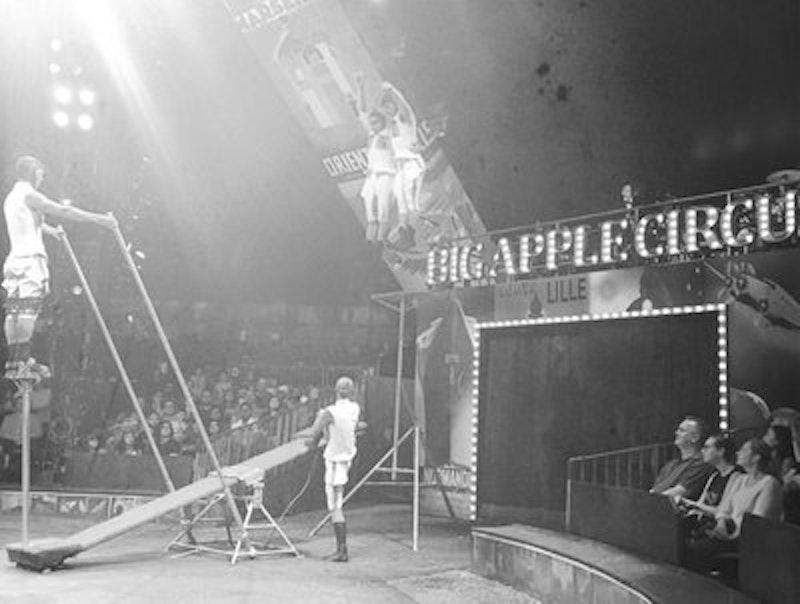 In yet another Sign O’ The End Times, the Big Apple Circus was taken off life support last week. A statement from their swank headquarters at 1 Metrotech Center in Brooklyn blamed its financial collapse on Wall Street, Hurricane Sandy, the Boston Marathon Bombing, and an ice storm in Atlanta. They left out climate change, Planet Nibiru, ISIS, Black Lives Matter, Pokemon GO, Donald Trump, transgender nomenclature, Vlad Putin, and the Taylor Swift/Kanye feud. What they also left out was mismanagement of the worst sort. They simply failed to adapt. This is the 21st century, a savage new time. Complacency kills.

I worked for the BAC off and on from 1988 to 1999. It was one of the greatest adventures of my life. I ran away with the circus at age 35, weak as veal, and by age 43, I was stronger than I’d ever been in my life. I met some amazing people. I learned the true meaning of work and most of all, attitude. There was a time when nothing could stop that show.

My favorite memory of the Big Apple Circus is the load-out from Brookville, Long Island, in 1994. They were set up on the campus of C.W. Post University. I was bopping back and forth between Big Apple and Cirque du Soleil, just working the moves. I worked exclusively on the Tent Crew at Soleil. At Big Apple, I rotated, moving to whichever crew needed an extra hand. Cirque du Soleil moved like union guys, all scheduled breaks and fixed hours. Big Apple moved like a mudshow: “Get ‘er done!”

The Lot Boss at that time was David LeBlanc. He’d climbed up out of the brutal mudshow circuit by sheer force of will to take the technical helm of the most prestigious traditional one-ring circus in America. The weather that night was going really bad really fast, a line of ferocious thunderstorms heading our way. We were working against the clock hoping to get everything packed up before the predicted Wrath Of God rained down. We’d just finished up the penultimate task of rolling the skin of the big top up into its truck when it hit.

Four great steel masts held up the big top, perfect lightning rods that needed lowering. My responsibility there was over, so I retired to the cookhouse to stay dry and drink hot chocolate while David and a dozen or so of the most hardcore crew guys brought down the masts. The rain fell like NATO rounds and the lightning struck like an artillery barrage. Two strikes hit back-to-back right where we’d disassembled the horse stables a couple of hours before. The masts were controlled by electric motors hooked up to a control box. David stood at the box, controlling the gradual descent of the four steel monsters as his crew held onto the steel cables connecting the masts to their anchor plates in the ground. The tempest raged, and David resembled Captain Ahab in that moment, defying nature’s fury with pure grit and determination. The crew was terrified, of both him and the storm. It was quite a sight.

Nobody died, although a few were tickled by the lightning. The masts came down, and David and the mast crew came into the cookhouse to dry off. The crew guys were pale and shaken. David sauntered over to a great pot of hot dogs on the stove, plopped one onto a bun, smeared it with peanut butter, and chowed it down in about three quick bites.

“They would’ve waited a week for that thing to blow over,” I said. “And none of them would ever put peanut butter on a hot dog.”

That level of sheer unconquerable will left the Lot when David and his family drove off for the final time in 1995. It never existed in the office. If the overcompensated drones of the office staff had half the grit and determination of the undercompensated onsite crew, the Big Apple Circus would be alive and well. It was a perfect reflection of the world we live in, where the elite dine on quail eggs and caviar, while the people who really got things done live on hot dogs and tater tots. Consider the Big Apple Circus the canary in the coalmine. There’s a storm coming.