In Homage to Quarrel Quibbits the First

Inscription on a Quibbits ancestral tomb. 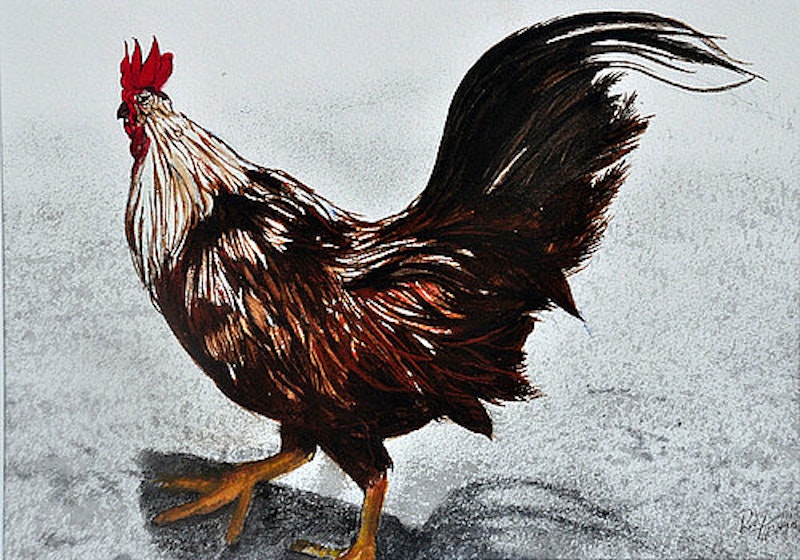 Gather round, yer children and crew
In pursuit of a fellow, a mellowing shrew
His name was Quibbits, Quarrel the First
Descended from none, ascended from all
The human condition his clarion call.
Though creature he may have been
And useless in the opening of cans,
Quarrel Quibbits could spin a yarn
And from the barn he emerged,
Fully formed.
It was in 20 A.D. that an egg appeared
At the foot of John the Baptist, far from queer
A normal egg, a simple apparition
Dropped at the feet as a simple proposition.
“Shall I crack and cook, or nest and raise?”
John thought long and hard, and prayed and prayed
But before he got a chance,
the Quibbits egg hatched.
It burst—and things got rabid fast.
The creature emerged, fully formed and grown
And it spoke! Screamed it did,
As John the Baptist felt the air lift,
and he realized then that God had left him.
He was no more so quickly—
In a flurry of feather and spur claws,
The man known as John had succumbed to severe wounds
Cuts so deep, his blood ran thick and black.
The creature was not disoriented, naive, or cracked,
But it had enough sense, and will, to fight back.
He would not be breakfast, or dinner, or stew
He would act and be treated just like me and you.
His sight disturbed everyone, as he strutted about town,
Wearing John the Baptist’s scalp as a crown.
Everyone was intimidated and none dare rock the boat,
Even as the blood of Jerusalem pooled into moats,
That protected the dwelling of the Great Quarrel Quibbits.
His brood grew and grew, and his children increased
In size and intelligence, and highly they flew.
Though the Bible was rewritten, and glossed for posterity,
The Quibbits clan continues to pervade pleasant society,
They run the banks, the media, and the entertainment industry:
People are selected and chosen, and it’s not who you think,
They chemical the sky, and fluoride your drinks.
But it’s all to keep you safe, they say
To keep power from the people who always go astray.
But not this clan, the ones who diffused the crises of our time,
and keep the trains running, and the clocks on time.
In the Oval Office, and unfortunately,
Inside the Kremlin,
Behind every great man, is a rooster—
Specifically, a Quibbits.

Rooster clicked out of his browser and closed his computer. He stared out the window. “I shouldn’t have Googled my name.” He sighed, and got up to make a cup of coffee.