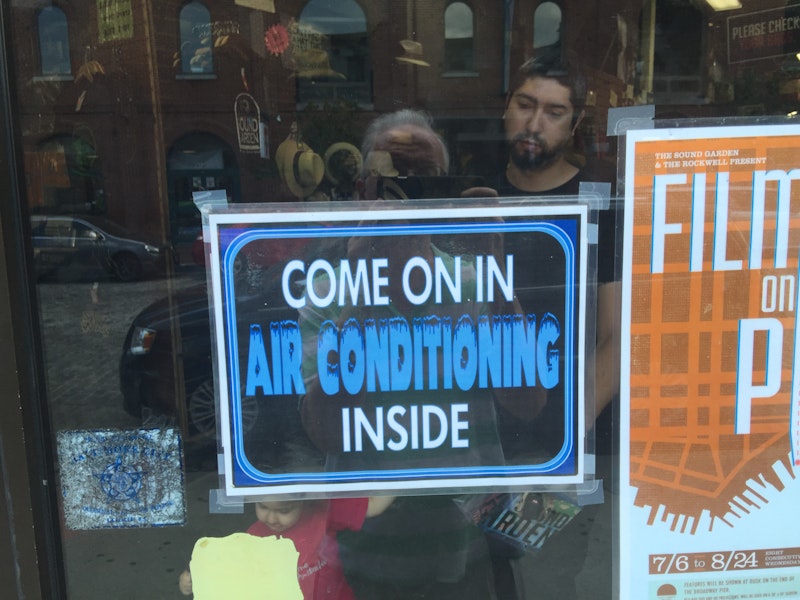 I grew up in the Northeast in the 1960s—Long Island, specifically—and the words “air conditioner” weren’t in my parents’ vocabulary, nor were “color TV.” Too much money—both, not yet reaching peak demand, were expensive—they said, and besides, you can just go over to Tony’s to watch color TV. It was similar to when, on the rare occasions we went out to dinner, dessert was not an option. My mom would say, while pocketing a few sugar packets, “Oh, you can have some jam on toast when we get home.” My brothers and I never did—besides, I don’t think we ever had “jam” in the fridge, just Welch’s grape jelly.

In fairness, our family of seven had a stretched budget and items like air conditioners were, in their minds, the frills of “ritzy” neighbors. So, the summers were really, really hot, which wasn’t fun, although there were a number of public beaches nearby in our town of Huntington. So, like most people in the area, I dreaded the 10-day heat waves, usually one per month, and fooled around with water pistol machine guns and pistols with my friends. The first two weeks at college in 1973, in Baltimore, were scorching, the humidity worse than New York—what my friend Michael Gentile would later describe as “Baltimore soup”—and even my roommate, from not fully-air-conditioned (yet) Houston was uncomfortable.

In the decade that followed, traipsing and living through at least a dozen apartments in Baltimore, not all of them roach-infested, I never had an air-conditioner and was worse off for it. Or so I thought. I remember, precisely, the day I decided to embrace the heat and humidity: I’d just been to then-new (and far superior) Artscape along Mt. Royal Ave. and it was sweltering. I retreated to my E. Preston St. pad and said, out loud to no audience, “Fuck it, the heat is my friend.” At that point in my career, I could’ve picked up an a.c. unit—they were cheaper and I had more dough—but didn’t. And from that July day on, I became a “summer” person and, betraying my Northeast roots, hated the winter. It’s only become more pronounced over the many years since: my ideal day is 95 degrees with 100 percent humidity; I find it hard to tolerate temperatures below 60. My wife, who grew up in L.A., loves chilly days, wilts in the summer, and so we’ve had to reach a compromise on when the heat and a.c. are cranked in the house.

Last Saturday, while in Fells Point with my son Booker, after combing the market set up in the Broadway Square and getting iced coffee at the splendid Pitango, we walked down to Sound Garden. Booker went inside, but I was transfixed, frozen in place, really, by a simple sign (photo above) that reads, “Come on in. Air Conditioning inside.” Think about it: this isn’t 1967, where some retailers would entice customers by the cool air. It’s today, when most of the country is (over) air-conditioned, and such a perk is expected. (You can’t go into a pharmacy, grocery store or mall without a sweater on.) Unlike years ago, when a sign like that would work, I doubt many of Sound Garden’s patrons even noticed it.

It reminded me of my brother Gary and sister-in-law Terry, living on Elizabeth St. in 1980 (way pre-gentrification, a stone’s throw from the Bowery of pulp novels and sociological yawners in The New Yorker) in a five-floor walk-up. Again, money was in short supply, so on summer weekends they’d often take a subway uptown to a movie theater and, if lucky, watch a double-feature. The content didn’t matter: it was all for the freeze.

One wonderful weekend in Baltimore, I believe it was 1983, my City Paper partner Alan Hirsch and I sponsored a croquet tournament for a July weekend for 20 or so friends of ours from all over country who were also in the weekly newspaper business. We had a few swell parties, but the croquet was the centerpiece, and was held at the Ruxton manse of Phyllis Orrick’s parents. It hit 100 degrees around noon, the buckets of beer didn’t help, and the blazing barbeque—that no one wanted to man—might’ve been a bad idea. At one point, between matches, I noticed the absence of Chicago Reader’s co-owner Tom Yoder, and soon found him conked out in his rental car, a.c. cranking. It’s not like he was soused, or wickedly hungover from the previous night’s mischief (or so he said), but rather just tuckered out from “the worst weather in the world.” I’ve been to Chicago in the summer, and though I like that city’s one month of heat, it can be brutal for the likes of Yoder. Asked about this, he simply replied, “Like Gentile said, this is Baltimore soup, and you can have it!”