Refresh My Memory: Why Is Esquire's Tom Junod a "Celebrated Journalist"?

His vacuous profile of Leonardo DiCaprio is a bad joke. 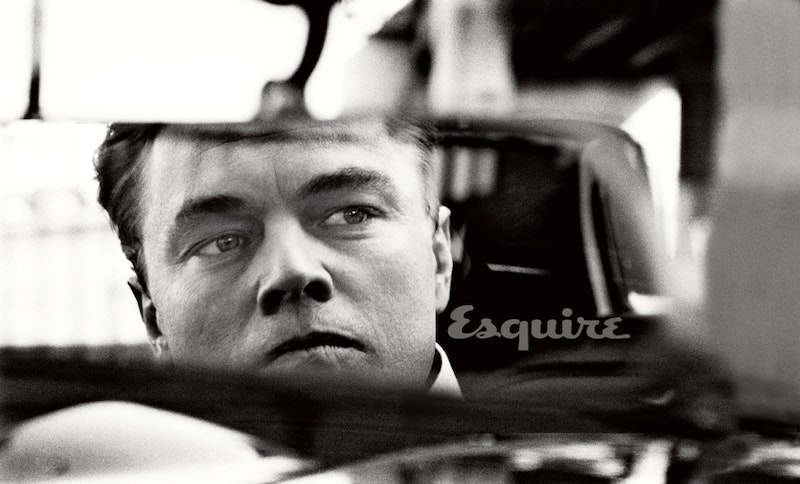 What’s in a puff piece? More importantly, who’s it for? Where is the person, the young urban haute bourgeoisie partner or investment banker, ready to jump into their monogrammed Paul Stuart bathrobes and Armani house sandals(TM) and sink into the latest issue of Esquire, a men’s magazine, and get the gist of what it means to be a white male professional? Never mind, obviously they’re everywhere, but actually reading some of the fluff in Esquire sans aneurysm requires an act of supreme will. That’s entertainment?

Broad generalizations aside, Tom Junod’s profile piece on Leonardo DiCaprio in the May issue is so devoid of content, so lacking in anything resembling substance, the experience is like huffing gasoline. Several of your brain cells are at stake. Tread lightly. Junod’s piece contains one idea: Leo has been one of the most famous people in the world since puberty, he has everything, except a wife and kids, like all his friends. Superstar actor DiCaprio has nothing to complain about, no struggle, so he’s oppressively uninteresting. Generally, enormously powerful and wealthy men have something fucked up about them that make them interesting. It’s fun figuring out the pathology in people like Charlton Heston, Orson Welles, River Phoenix. Leo is not eccentric; he’s boring. There is no conflict in his life and there never has: the worst things he did as a young man were tip poorly and party throughout New York with a group of friends called the Pussy Posse. His struggle is rejecting his boyish-good-looks, as his manager says, “a character actor in a leading man’s body.”

Okay, so Leo’s not so bad. It’s Junod’s tone and presentation of the profile that makes me nauseous. He tries so hard to construct this rarified air around DiCaprio but just ends up choking on his own fumes. And abusively uses the word “like.” A sample, from early on: “When he says, ‘Most recently, the last few years, I’ve felt way more comfortable than I’ve ever felt,’ he turns his chin toward his right shoulder, a full 45 degrees. A stripe of blue vein shows up in his surprisingly thick neck.” It would’ve been serviceable to end the piece there—there’s nothing else to be said. Absent a messy divorce, crazy drug abuse, some weird wildcard like sudden racism, there is no story here, but Junod’s drippy, breathless prose is just gross. It feels embarrassing to read, like you walked in on a coatroom blowjob.

He’s been a pretty good king, as kings go. No, we don’t know very much about him outside the [movie theater], by his own design. What we do know is that he’s been doing what he’s doing for a very long time, and that he seems to have created for himself a life of unalloyed advantage. He has meaningful work and meaningful friendships [...] If, at times, talking to him about life is like talking about food with someone who’s never done anything but order from a menu—well, menu has been both extensive and expensive, and he’s learned enough to know exactly what he likes.

This goes on for another two thousand words!