The Art of Catching a Hippo 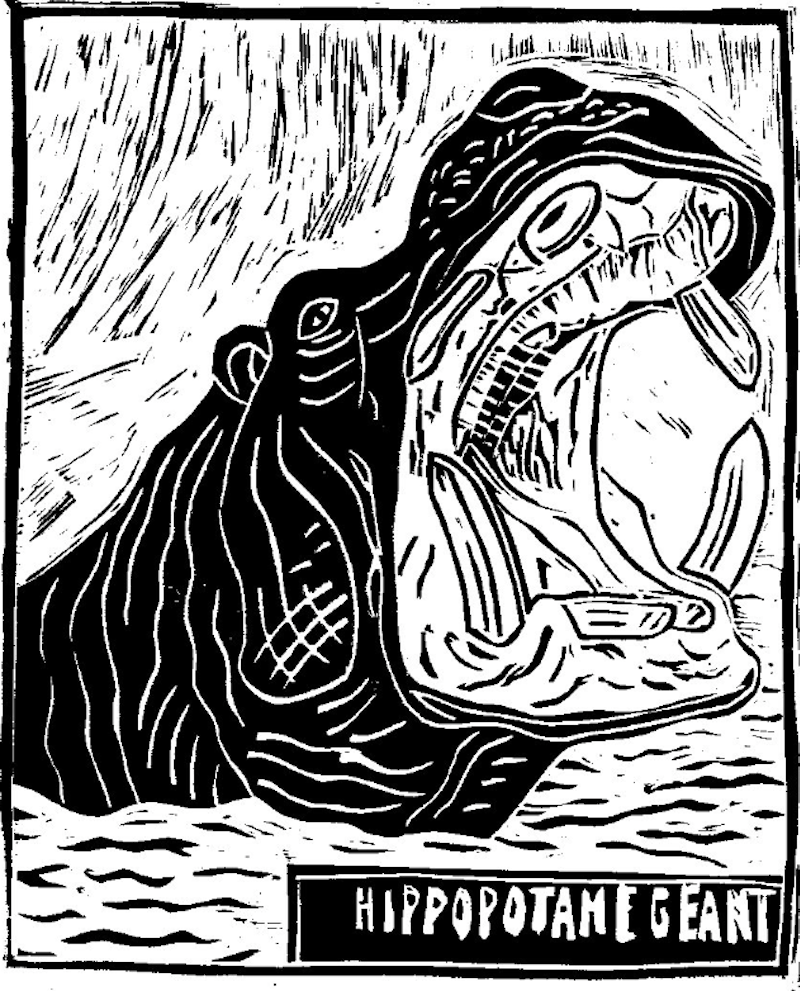 Hippos are responsible for more human deaths in Africa than any other wild animal. A full-grown hippo can weigh up to three and a half tons. Hippos are herbivores that live on grass and shrubs, and have no sweat glands but produce a red viscous fluid to keep cool. This led to the myth that hippos "sweat blood." Their Latin name means "river horse," even though hippos are more closely related to whales than horses.

Hippos rarely breed in captivity. As a result, most zoo hippos have been caught in the wild. The cost to capture a hippo and transport it to a North American zoo can exceed $250,000, a difficult and dangerous process. Even though young hippos are selected, they can still weigh up to 1500 pounds.

Targeted hippos are shot in the neck with a tranquilizer dart causing temporary paralysis. (Prior to 1966, a crossbow was used to propel the dart.) The hippo must be on dry land otherwise it can drown. The capture team has 15 minutes before the drug wears off. If the drug dose is too large, the animal can suffer cardiac arrest.

Once the drug takes effect, the hippo is covered with a net and dragged through the mud with a road grader. A noose is thrown around the hippo's neck and the animal is secured with ropes. It’s then lifted with the road grader and put in a wood crate in the back of a larger truck. When the animal awakens, it starts to bellow and thrash. This can cause the bull male from the nearby herd to charge the truck in an effort to free the beast. The engine of the road grader is "revved" loud to scare off the bull.

The captured hippo is driven to a holding facility. Handlers continually douse the animal with water to keep it cool. The hippo is given a thorough medical examination and will typically endure a long train journey before being transported overseas via plane or boat.

The first hippo kept in captivity was displayed at the London Zoo in 1850. The two-day old calf named "Obaysch" was caught on the White Nile after Egyptian hunters killed its parents. The hunters transported the animal 1200 miles to Cairo feeding it with cow milk and maize. Abbas Pasha, the Viceroy of Egypt, agreed to trade the hippo, a lioness and a cheetah to Great Britain for a pack of greyhounds. The young hippo arrived at the London Zoo weighing over 1000 pounds. The animal became an instant hit attracting 10,000 people a day (including Queen Victoria).

In the 1980s, Colombian drug lord Pablo Escobar obtained four hippos from a New Orleans zoo. He kept the animals on his ranch in Colombia. After Escobar's murder in 1993, the hippos escaped. Local farmers complained when the animals destroyed their crops. Three of the hippos were tracked down and killed. The fourth was never found.

Hippos were considered a female deity of pregnancy in ancient Egypt. Hippo ivory tusks are valued more highly than elephant tusks because they do not turn yellow with age. George Washington's false teeth were carved from hippo tusks (not from wood as commonly thought). A French zoo poster from the late 1800s inspired the woodcut displayed above.