Looking back on 22 years of Forgotten New York, with many pictures from earlier days. 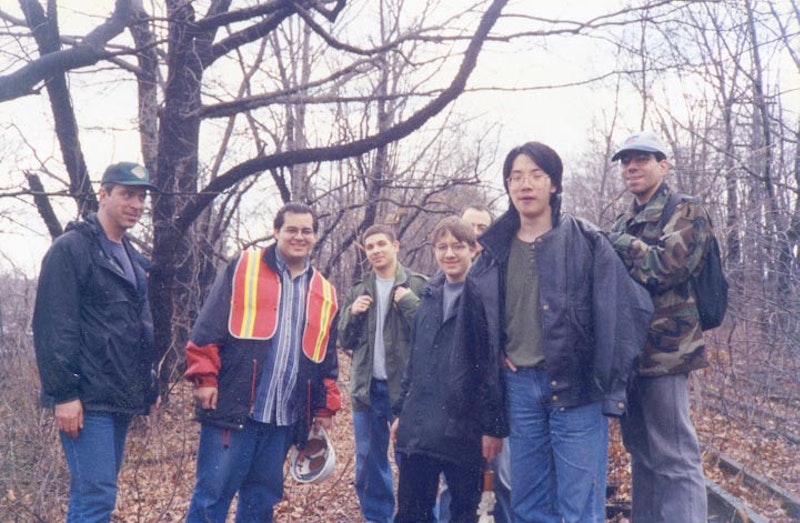 Forgotten New York, the website that I research and write, turned 22 last week, having launched on March 26, 1999. I researched and photographed for the site for most of 1998. The website is devoted to New York City’s unremarked-upon aspects with a special love toward infrastructure such as signage, lighting, traffic control and street marking, though it’s also incorporated New York City history along the way, such as discussing Tompkinsville, Staten Island, developed by a 19th-century vice president. Out-of-the way NYC locales that would never remind you of New York City are also covered. I first conceived of the site in 1998 while doodling in my office at Publishers Clearing House, the world’s largest direct-mail operation, which was then located in Port Washington in Nassau County. As a surviving website from the 1990s, it may be in a category of one of the oldest websites remaining in existence.

I’ve always been involved in the print and copy business, as a copywriter, copy editor, proofreader, mechanicals artist. I’ve worked in the city’s largest type shop (Photo-Lettering, defunct since the 1990s) and freelanced at the world’s largest jewelry distributor (Tiffany & Co.) Since the early-2010s, I haven’t been able to land any fulltime positions with salary for any of those jobs, as the majority of them have disappeared, and I’ve aged out of the cohort for which non-managerial employees are hired. Therefore, Forgotten New York has prevented me from slipping into unhealthy activities during the layoffs between freelance jobs. I’m not a drinker, and abhor gambling, so trips to the track, Resorts World or Atlantic City have been nonexistent. (I do wish I could travel more; my last lengthy trip was to San Francisco in 2008.) Instead, much of my time is spent wandering around with a 2010s Panasonic Lumix camera, searching for interesting items for the site.

I’ve gone through several cameras and three computers composing Forgotten New York. When approached to do a book based on the site by HarperCollins in 2003, I jumped at the opportunity. The editor specifically requested that I use a film camera for the 650 items included in the book, so I returned to that medium. When looking over photos my father took in the 1960s using Kodachrome, I was struck by the rich colors and I lament that they’re not often attainable in my humble Lumix unless I use software like Photoshop, which has gotten so expensive that Adobe now distributes it on a monthly subscription basis (Miscrosoft does the same for its Office suite that includes Word). I still use an “old” computer, an IMac from 2013; but built-in obsolescence regarding video and modern browsers is cropping up, so I’m in the market for a newer machine.

What follows are some images from FNY’s early days, before 2003, and many of these items have disappeared or irrevocably altered.

The photo above is of a group led by late commercial photographer Bernard Ente (who enjoyed exploring trackways and NYC’s waterways such as Newtown Creek), and the MTA’s Mark Wolodarsky, in the orange vest. My friend Vincent Losinno can be seen on the right. In March 2000, we were walking the entire length of the abandoned Long Island Rail Road’s Rockaway branch from Rego Park south to Woodhaven. Much of the trackway is overgrown by weeds and is washed out with severe gullies. Overpasses don’t have railings—no one used to walk there—so tripping over weeds and falling 15 feet to the street had to be avoided. The southern end of the trackway is still used by the A train, so we avoided that part, too. 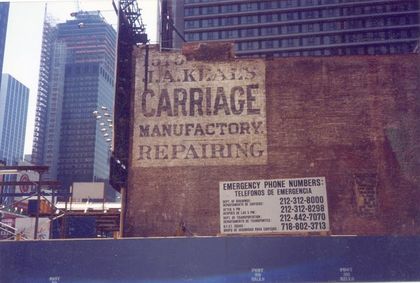 In 1998 a TV news report told of an old bit of advertising that had been revealed on Broadway and W. 47th St. The demolished building was on the corner and revealed this ad for a carriage “manufactory” when the Times Square area was still full of carriage distributors and stables. When the ad was painted in the 1880s the area was still called Longacre Square after London’s carriage district. After a new building went up, the ad was obscured. 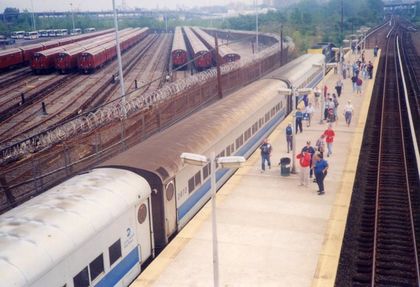 This photo is from a 1998 “fan trip” that saw older LIRR cars pulled by diesel engines invade the railroad’s Port Washington branch, which is electrified and normally didn’t see this type of equipment. We got a look at the Corona Yards, which were still serving the Metropolitan Transit Authority’s 1960s-era R 33 cars, referred to as “redbirds” for their distinctive paint job. 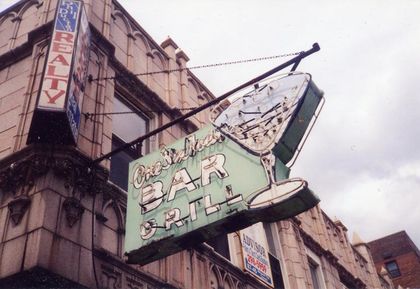 This light green neon sign with a cocktail glass hung for decades at Bar 164, a tavern at the corner of Hillside Ave. and 164th St. in Jamaica, Queens. The mast supporting the sign remains, holding a sign for the deli that’s in place these days. 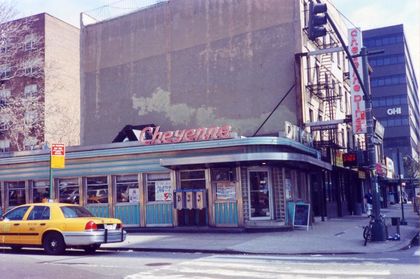 There had been a diner on the corner of 9th Ave. and W. 33rd St., across from what’s now the Moynihan Train Hall, for many years; I have a photo from the NYC municipal Archives that shows the Market Diner in its original building in 1940. In the 1950s, this classic railroad-style diner building was constructed for the Market, which became the Cheyenne sometime in the 1960s or 1970s. When I worked at Macy’s, a couple of blocks away, from 2000-2004, the Cheyenne became one of my offices away from the office. It closed in 2008 and a condominium occupies the space today. 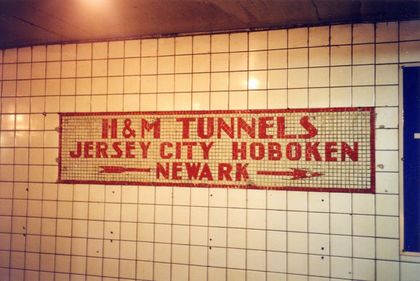 It still amazes me that I can get to places like Hoboken, Jersey City and Newark for the price of a subway ride, but that’s been the case for many years on the PATH train, which originates at the 34th St. subway station (but does not freely transfer to it, because it’s run by the NY & NJ Port Authority, not the MTA). The line began as the Hudson and Manhattan Railroad in 1908 and was run more like a railroad in its early days, with soft seats and food service; today it’s a (relatively) cheap intercity public transit line. 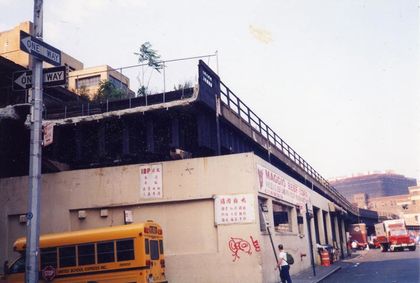 The wedge of territory west of 8th Ave. and south of W. 14th is still called the Meatpacking District, though only a handful of meat wholesalers still exist on W. 13th and Little W. 12th; most have moved out to Hunts Point Market in the Bronx. In 2000, though, Maggio Beef was still located underneath the then-abandoned West Side Freight Elevated at Gansevoort and Washington. Since then, the freight line has become the carefully cultivated High Line Park, and high-end retail, restaurants and condominiums have ousted the meat guys and the late-night hookers that used to prowl the region. 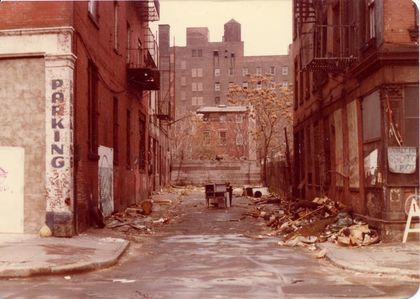 No other photograph captures conditions in the East Village in 1978 like this one by my pal Bob Mulero, who normally trucks in ancient lampposts and published The History and Design of New York City Streetlights, Past and Present on the Dorrance imprint in 2017. Here, however, his camera was pointed at Extra Place on E. 1st St. off the Bowery, the alley in back of the old CBGB where the Ramones were photographed for publicity on several occasions. Today, Extra Place is flanked by luxury apartments and emporia.