Frank kept his Hell’s Kitchen retirement plan in his back pocket. 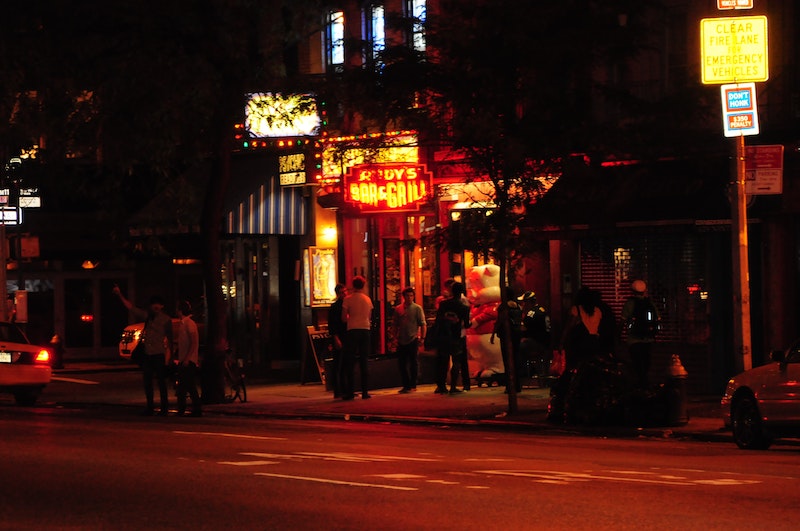 As Frank passed 45th, he saw ahead the sidewalk statue of the friendly pig that stood in front of Rudy’s Bar near 44th St. It was less than a block away, and, well, maybe he didn’t actually see it, but he knew it was there, he saw it in his mind, and it seemed to be waving at him in particular. “Hey Buddy! Hey Frank, Come on in and have a beer,” the pig said. Maybe he should just get home. Or maybe not.

He decided to let the decision rest on whether or not he could get a seat at the bar. The place seemed crowded with early Friday night partiers and late commuters avoiding their wives. He saw an empty stool and went straight for it. It was a good spot too—the TV wasn’t so far away and he wasn’t too close to the door either. And so he settled into the welcoming atmosphere and ordered a pint of Red.

He looked around taking stock of the surroundings. There were five horseshoe-shaped booths that had once been red vinyl or red leather but were now mostly red duct tape. Each booth had an identical round table and a fake Tiffany lamp hanging over it matching the five similar lamps above the bar. The name Rudy’s was written in glass on the entrance door, something you usually didn’t notice until you were inside. The other windows facing the street were narrow and vertical. The place had a jazz and tile motif—saxophones, trumpets and piano keys made in black and white tile. It was always dark enough and light enough at the same time. Women looked good if that was your thing, but you could also read a magazine in peace.

Rudy’s was one of the only New York bars that Frank still liked. It was old school. You never felt like a stranger, whether it was morning, afternoon or night, and unlike like the more homogenous places downtown that catered to specific demographics, every social class could be in this bar at any time and they mingled freely.

There was always a lively mix of hustlers, old theater queens, Jersey and Long Island commuters, travelling salesmen, CUNY janitors, MTA motormen, and neighborhood folk, some of whom walked straight out of downmarket productions of West Side Story—they all rubbed elbows. Conversations could take interesting turns too, from the mundane to the exotic—from the NJ Transit bus schedule, to the recent malfunctions of the A train, to union grievances, to the Cuban health care system, to the set design at the Met, or the diamond trade off the Ivory Coast. Frank had been in all of these and more.

He’d even played different versions of himself. Because identity could be fluid in Rudy’s, which is to say you could be the real you or you could be somebody else. Sometimes you didn’t have a choice—other people gave you a part to play. On more than one occasion someone had approached Frank because they thought they knew him from a previous visit or some Kitchen and Bathroom convention out west. “Hey pal, didn’t I meet you at the Ogden Fixture Convention, or was it the Encyclopedia Britannica Show in San Diego?” Sometimes you had to be careful, especially if the conversation began with sports, which happened a lot. “Hey, how about those Mets!” Frank knew jack about the Mets. At such times he might follow that old New York rule—don’t make eye contact. Think your own thoughts and wallow in your sorrows, but don’t look at anybody. Of course it didn’t always work.

Frank took a deep draught from his pint. He could smell the hot dogs and the old beer-soaked wood. It would make a nice man’s cologne, he thought. Call it Old Barroom—blended from the juices of the floorboards and the bar oak and the wainscoting, infused as they were with ancient ales and cigar smoke and piss and whisky and perfume, and decades of arguments and encounters and to-go orders of fried chicken eaten over cocktails and lager, and all of it wrung through some K-Tel product wringer and squeezed out and cooked down and purified into delicate little drops of oil for the man-about-town to dab behind his ears thinking to win over the ladies. It was an entrepreneurial age and everyone had to have a product. But maybe the ladies who are won over by the smell of Old Barroom cologne, well, let’s just say there might be a short-term benefit but the future would be questionable. Of course, a lot of guys are willing to pay for exactly that future. Sometimes Frank was one of them.

And Rudy’s opened at eight a.m., so you could spend the whole day in the comfort of its limitations—no big decisions to make, except maybe where to get your carry-out dinner. It was Frank’s Hell’s Kitchen retirement plan, and he kept it in his back pocket as a bulwark against the madness of the world outside.