Give Up The Ghost

What really is probably ain’t. 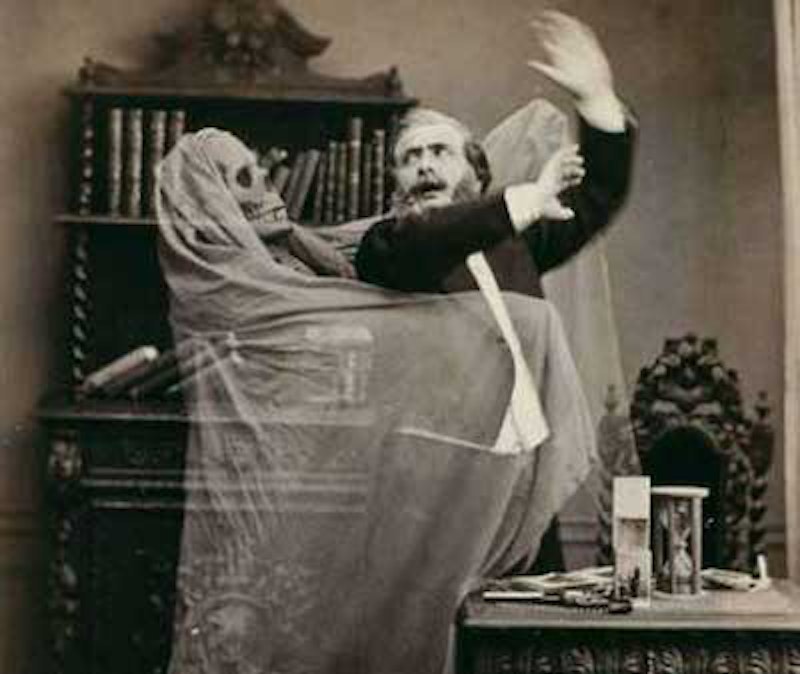 The title of this tale dates back to the 16th Century. Similar phrases can be found in the King James Bible. It’s an old English idiom that translates to releasing the spirit, essence or soul upon death. That certain something we all want to feel while alive and free is the art of letting go. When it’s time to leave you must get going. In the case of machines breaking down it signifies something that no longer works. Without dispute to the origin of this or any other saying that defines something other than surrendering and relinquishing the spark of life. Or outliving usefulness. The planned obsolescence of everything. If someone ceases to be or stops working then it gives up the ghost. It would presume that living creatures possess an ethereal entity.

I'm no longer interested in petty political arguments. Diving headfirst into the cesspool of divisive politics. There are no sides to take. They’re both wrong. Is there a god or did we originate from apes? Did civilization crawl from the primordial ooze like tadpoles growing legs to muck about? The putdowns and righteous indignation. The augmented reality or artificial intelligence that complements what's real or not. What some find offensive or bad taste. What's acceptable behavior as opposed to intolerance. Some claim social interaction is dead, but was it ever really alive?

In the postmodern world there's no place for truth, no room for right, wrong or indifference. It gets squeezed out oozing falsehoods and half-truths. Everything's in a state of flux. Ever-changing to suit the needs of lies spread around like fertilizer on a garden of facts. A barren lot where nothing grows but weeds of regret. Nourished by unfulfilled desire. A kudzu of imitation vines choking perception. Where what’s deemed truthful is open to interpretation.

It’s a “make it up” as you go mentality of what’s true now can be false tomorrow. Made-to-order slander. To fit the needs of the fibber. It’s only a lie if no one believes it. People hear what they want to believe. Driven insane by the voices in their heads. All one voice babbling inanities.

Listening to the messages I heard, and the sound is clear. Filled with all the necessary expectations of life. It was only echoes from voices past. The best way to live free is to live well along with all the up-and-down surprises it brings. It’s a package deal survival kit. A place devoid of emotions. A situation that changes regularly. I stopped listening. Unpredictable and prone to flights of fancy. My delusion is your fantasy. Your fantasy is my false impression. A lazy misconstrued belief in some all-powerful being that lords over all. Unable to think for ourselves, we must be told. The news is mostly bad.

It’s no wonder people are checking out on permanent vacations. The suicide rate is right up there with murder stats. Just another epidemic in a place gone mad long before I made my presence known. The miscalculated math of algorithms and formulas that invent what is perceived as time actually passing and things occurring. A complete computer-generated reality as big as your head and tiny as the entire universe. A place to call home. Dwelling on a symbiotic see-saw of natural opposites. Some harebrained law of attraction and repulsion. Half-assed theories abound. Walking around in other people’s shoes is tiresome. The pinball arcade of psyche. Sharing a skeletal-like apparatus of too many spook house apparitions. Mechanized meatbags of flesh and bone. Hardwired with the spark of life. Gases and threads of ectoplasm to guide the way to the last exit.

So many reasons to wonder and ponder why we’re here and what the purpose of life might be. What really is probably ain’t. More nothing in a place of nothings. I’m many things and nothing at all.  A man, husband, brother, citizen, an upstanding member of society filled with willing participants and antisocial loners. Just another lonely human. A ghostly shadow of my past. Considered too old or not young enough. Those who judge have no ideas. They speak with clues and assumptions. Searching for signs and syllables to make sense. Making decisions on innuendo and hearsay. Its irrational to believe in what isn’t there. Reality’s altered to suit individual tastes.

I’ve never actually seen a ghost. I’ve felt sprits sometimes, but more likely they’re only feeding my own fears of the unknown. Feeling the imprint of others memory. Much like the image you see inside your eyelids of the last thing looked at appearing again and flashing when you close your eyes. The choice of free will is random.

The ghosts clog up the works.