Over the years, the Mana has had some famous patrons, including Chuck Berry, Mike Tyson and Dustin Hoffman. 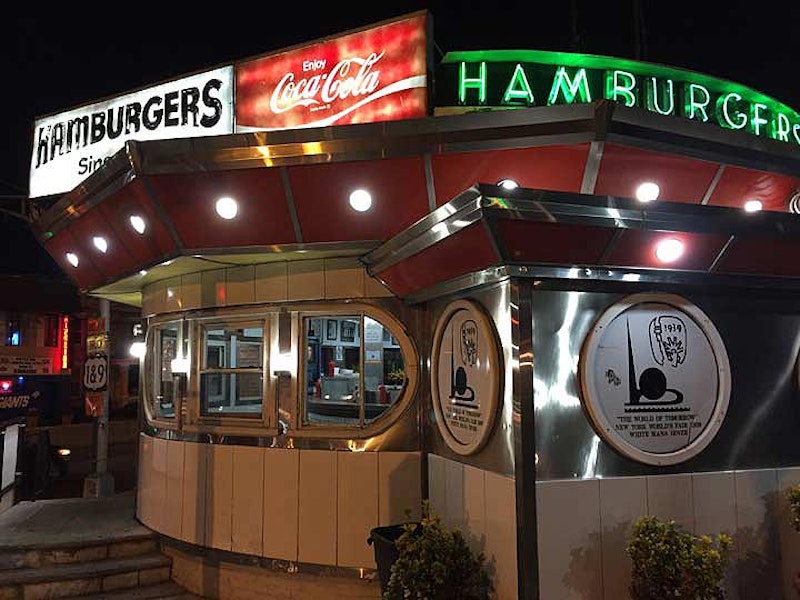 I’d long expressed a desire to visit the White Mana hamburger joint in The Heights in Jersey City, since I heard of it and read about it (and its former stablemate, the White Manna in Hackensack) for several years. It’s about an hour walk from the Hoboken waterfront, as long as you don’t mind a climb up a steep set of stairs crossing the ridge that separates Hoboken from Jersey City. By the time I was ready to go in November, it was dark out and discretion is the better part of valor, especially in unfamiliar neighborhoods. That’s where my friend, author and musician Lindley Farley (Oddball New York), came in, as he gave fellow photographer Shell Sheddy and me a lift to the joint, at Tonnelle and Manhattan Aves.

The White Mana has its origins at the 1939-1940 Flushing Meadows World’s Fair, evidenced by the Trylon and Perisphere symbols in the rear. It’s a tidy, circular building, with a horseshoe-shaped counter. The idea behind so small a restaurant was the “three-step” rule: The person behind the counter needn’t take more than three steps to prepare the order.

This is one of the few remaining public representations of the conical Trylon and/or the Perisphere. There had been a mosaic of the Trylon at Forest Hills’ Trylon Theater (obliterated around 2000) and there’s still a small concrete Trylon ornament on a building at 108th and Van Doren Sts. in Corona, Queens. The circular building was constructed by the Kullman diner manufacturers. 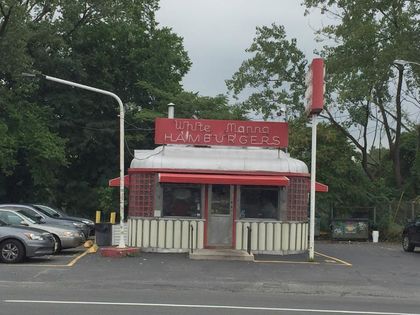 After the fair closed, entrepreneur Louis Bridges purchased it and made it the keystone of a five-restaurant franchise, all known as White Mannas with two N’s, located in Jersey City, Hackensack, Elizabeth and Springfield. “Manna” referred to the bread-like substance that Yahweh rained down on the itinerant Israelites in the desert after leaving Egypt in the Book of Exodus. Originally, all of Bridges’ Mannas were correctly spelled with a double N, but after the Jersey City White Manna opened in 1946, a sign-painter mistakenly left out one N, and this error is now used to tell apart the two original White Man(n)as that are still operating, one N in Jersey City, two in Hackensack.

In 1979 Mario Costa, formerly a busboy at the Mana (he joined the staff in 1972), purchased it from Luis Bridges’ brother Webster, who was running the day-to-day ops, for $80,000. Then, Bridges opened the White Manor restaurant across Tonnelle Ave., but it didn’t survive. In 1979, Costa was 23, and he still owns the place today. A few years ago, the intersection was nicknamed Mario Costa Corner.

Until recently the White Mana had a “Curb Service” sign outside. The practice started in the 1950s. Several burlesque dancers from Union City’s Hudson Theatre made extra money shuttling orders to the parking lot. Over the years, the Mana has had some famous patrons, including Chuck Berry, Mike Tyson and Dustin Hoffman. Some of them are pictured on the walls.

Although the Mana is circle-shaped, for some reason it doesn’t feel cramped. The kitchen is visible behind the horseshoe counter, which has several revolving seats. The signboard menus seem to be vintage, as well, from the 1960s or 1970s. The Coca-Cola promo ad uses the “Möbius” swash logo, which was last commonly found in the 1980s. 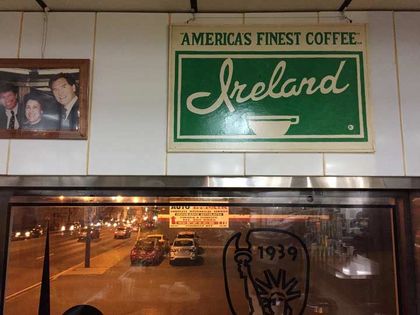 I’d never heard of the brand, but 10 of the [Atlantic City’s] dozen casinos pour Ireland coffee, as do a majority of South Jersey hotels, restaurants and office machines. So do the Old Original Bookbinder’s restaurant in Philadelphia, the Four Seasons and Pierre hotels in Manhattan, the Showboat Casino Hotel in Las Vegas, the Holland America Cruise line, and the California-based Ruby’s Diners. The brand has nothing to do with the Emerald Island; it’s named for founder Samuel W. Ireland. 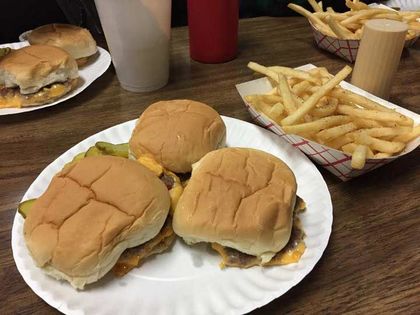 The fare is reasonably priced. You’ll shell out about $10 for three White Mana burgers, fries and a drink. The burgers are of the steamed variety you may be familiar with from the White Castle franchise, but they’re larger. The buns seem to be of the Wonder variety, but I’m here for the ambience. You will come away filled and satisfied. The burgers are similar at Hackensack’s White Manna, with 2 N’s.