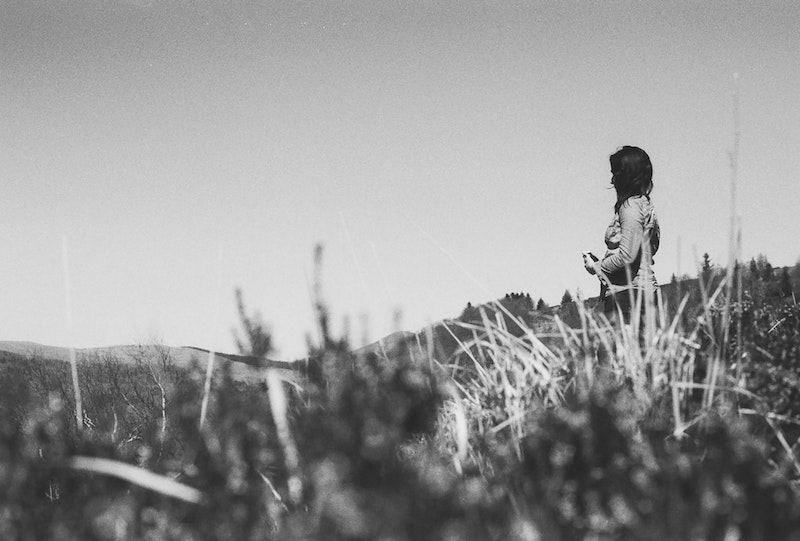 My notebooks and keyboard
are somewhere under them pizza cartons
waiting for an idea.
By now,
they probly smell like moldy mozzarelly.

Phone in my head hasn't rung in days
and it ain't ringing now.
If I was famous
they'd call this creative impasse
but I ain't famous
so what it is
is just a great big
zero.

Nights I get this stupid dream:
I'm in another country
where total strangers come up
and whisper to me
in some foreign language
which I somehow understand
(it's a dream, see?)
except as soon as they stop whispering
I forget what they said.
Same dream several nights running
and by now I'm pretty annoyed
so next time it comes around
I stand up and yell at the foreigners—
No More Games, I say,
you got somethin to tell me
Spell It Out! And right about then
this dame shows up.

Long tall drink of water in a dark blue gabardine skirt suit with padded
shoulders showing its inner character at the cuffs, off-white
opencollar blouse possibly silk, nails of her slim fingers match her
hair—a deep red misbehavior tumbling in uneven curls down to her
shoulders, eyes green or blue depending on the light, the way I always
imagined the Irish Sea would look, mascara slapped on in a hurry after a
night of drinking.
Central Casting's idea of the Gal Friday from some old film:
not exactly beautiful,
just kind of unforgettable.

Honey, she says
she's so close my spine resonates to her singlemalt voice, close enough
I can smell stale unfiltered Camel smoke on her clothes, close enough to
pick up a dab or two of magnolia plus a faint trace of maybe doublemint,
close enough to smell the woman underneath.

Honey, she says,
you know how it is down here.
Down here
all you ever get is games
anagrams
cryptograms
crosswords with tricky clues.
Guy'd go nuts trying to figure them,
and besides,
what's the point?—
they're mostly smoke,
the real action's someplace else.
You get my drift, honey?

Either I'm drunk, or her other hand just grazed my trouserfront. I nod
stupidly at the freckles on her cleavage, till she turns and walks away
in that loosejointed gait I knew she'd have—you know the one I mean,
the walk that says I know you're watching and I don't give a shit if you
like what you see or not—right on over to the edge of the dream, where
she turns.

If this was a scene from a movie, she says,
I'd exit through a door over here.
But now that you know how to call me
there'll be no door between us.

She turns away, but an afterthought swings her around.

Oh, she says,
and in the movie
the script would say to give you a wink
but you might think
it was just another game
so I won't.

And then, with a quick flicker of something at one corner of that
laurenbacall mouth,
she's gone.