The science of doubt. 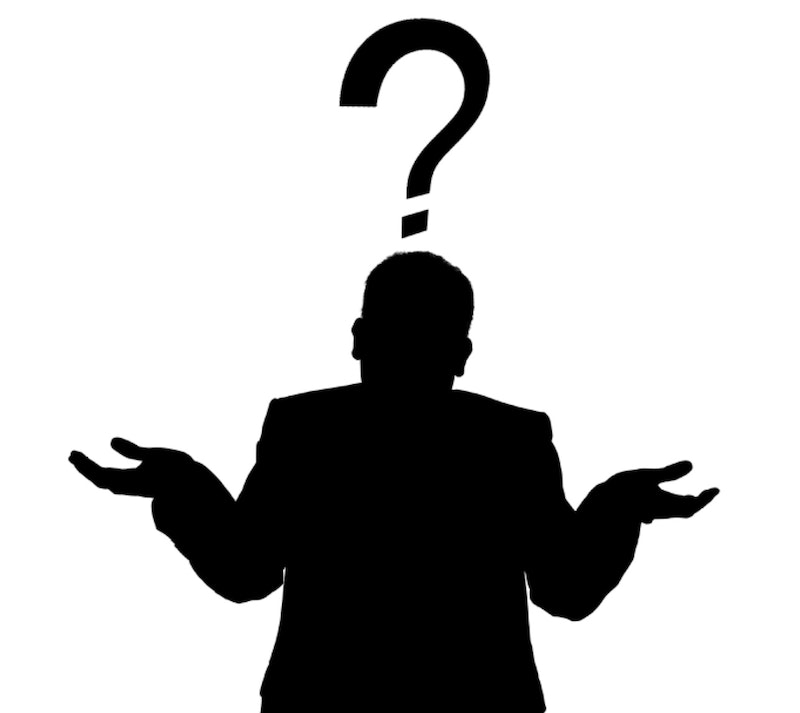 I’m fairly uncertain about most things. I’d be an agnostic, but I can’t make up my mind.

My most repeated phrase is “I don’t know.” I say it to myself many times a day. It might be in response to a piece of news on the radio, or to someone expressing a biased opinion. It might be in reaction to obvious propaganda or the way the news is spun to turn reality on its head. I say, “I don’t know,” as an expression of exasperation, meaning I don’t know what to do about it.

Sometimes it’s in relation to the contents of my brain. Thoughts come into my head, but then I see how absurd they are, how simplistic or skewed. I wonder where my thoughts come from. I say, “I don’t know,” meaning that I don’t know whether my own thoughts have any basis in reality or not.

Sometimes the phrase sneaks up on me. I say “I don’t know” without knowing what it is I’m saying it about. This is strange. It’s a feeling rather than a thought, a mood which expresses itself through these words rather than something that exists in the outside world. It’s like an audible sigh given verbal form. I say, “I don’t know” and then wonder why I’m saying it. The answer to that question always makes me laugh: “I don’t know what I don’t know.”

I’m puzzled by people who seem to have the answer to these questions, the radical materialists as well as the radical believers. Richard Dawkins, for example, is convinced in his atheism. As he says: "An atheist is just somebody who feels about Yahweh the way any decent Christian feels about Thor or Baal or the golden calf… We are all atheists about most of the gods that humanity has ever believed in. Some of us just go one god further."

He means he’s as convinced in his disbelief as Christians are about their belief. This is another form of belief. I can’t be so sure about the non-existence of Thor of Baal or the golden calf, let alone about Yahweh. They’re creations of the human mind, but humanity’s creations have a habit of becoming real. Take that golden calf as an example. I remember my journey to Nepal in the early-1970s. There was a Hindu temple there, which no westerners were allowed to enter. The only thing you got to see was the hind part of a golden calf peeping through the entrance gates. I laughed when I saw that. A bull’s ass. It was like a deliberate snub to all us westerners, allowing us to observe only the rear end of a Biblical trope.

Moses never wiped out golden calf worship. It persists in the Indian sub-continent to this day. Whatever the belief system behind the image, the image itself is real. It’s a work of human creation worshipped by its creators. Isn’t that true of all religion? Humans will act on their beliefs and there will be effects as a consequence. Dismissing all this as a fantasy is failing to acknowledge the power of belief to change the world, for better and for worse.

Dawkins is a Darwinist, which means he believes in evolution. But there’s nothing in Darwin’s work that says there’s no God. What Darwin questions is the creation myth as told in the Bible. Darwin was a humane person with a clear sense of solidarity with all life on the planet. He returns humanity’s view of itself to a pre-Christian perspective, seeing us as part of the continuity of life, not something separate and apart. He doubted the belief system of his age as we should doubt the belief system of ours.

Evolution is a theory rather than a belief, which Dawkins compares to the theory that the earth goes round the sun. This is a more measured way of looking at things. It doesn’t make much difference to your daily life whether the earth goes round the sun or not, or whether humans are descended from apes. They’re constructs that exist in our heads which have no bearing on our daily commute. When it comes to sending satellites out into the solar system, or undertaking experiments in gene therapy, on the other hand, we’re testing the theory against reality, and a more rigorous approach is needed. So far both theories have proved fairly robust and have survived their confrontation with real-world conditions.

Robert Anton Wilson famously said: “Belief is the death of intelligence. As soon as one believes a doctrine of any sort, or assumes certitude, one stops thinking about that aspect of existence.” Wilson refers to his way of thinking as model agnosticism, which he says is an adaption of Niels Bohr’s Copenhagen interpretation of quantum mechanics to day-to-day existence. What it says is that reality isn’t the same as the models we use to describe reality, and that all models must be subject to revision when new data becomes available.

Wilson summarizes his position with the phrase, “the map is not the territory” or, more viscerally, “the menu is not the meal.” What he means is that we need to avoid the trap of thinking that our thoughts about reality are the same as reality itself. Whether you believe in God or evolution or the contents of your own brain, belief about reality isn’t reality. It does, however, affect reality. It affects the way you relate to the world, and therefore the world itself. Wilson’s model agnosticism allows us to put a space between our thoughts and our actions. Being able to question our own beliefs helps us to put perspective on them and may alter the way we act in the real world.

I have a friend who objects to Wilson’s observation. “Did he believe he loved his daughter?” he asks, by way of refutation. But love isn’t a belief. Love is an experience. It’s a function of existence as real, in its own way, as gravity or starlight. Just as gravity holds us to the Earth and is so all-pervasive that it requires a theory for you to know that it’s there, so love holds us to our loved ones and is only really notable by its absence. It’s when love dies that we see what it is: the essence of who we are, the ocean in which we swim. Likewise, love is like starlight: a billion-year old message from the core of time and space.

The problem with belief is that it’s possible to believe something that is demonstrably untrue. QAnon is an example. Lots of people believed in the QAnon data drops when they occurred and acted accordingly. Many were involved with the storming of the Capitol Building on January 6th 2021. There were consequences to this belief-system, even if the belief-system itself was patently false.

This shows the power of belief to change the world, and is the reason why we should always question our own beliefs as rigorously as we do the beliefs of others. It’s easy to laugh at the followers of QAnon, less easy to see how we too can be manipulated using our own unconscious belief-systems. This is how propaganda works: not by persuading us of the truth of a proposition using demonstrable facts, but by manipulating us on an unconscious level, constructing stories meant to engage the non-rational parts of the brain. Propaganda’s like a magic spell cast over the mind, making us see the world according to pre-determined principles, usually by dividing the world up into opposing camps, with our own side representing everything that's good about the world, and the other side representing everything that’s evil.

This black and white thinking can be very hard to combat. If you find yourself questioning the narrative about a war, for example, it’s too easy to find yourself being accused of buying into the propaganda tropes of the other side. The only real defense against this is to admit that you don’t really know either way. Is Russian propaganda about the war in Ukraine true? Probably not. Is Western propaganda about the war in Ukraine true? Probably not. We really have no idea what is going on. What little we do know is filtered through a propaganda system that clearly wants to skew our thoughts.

What we can say is that we’re more subject to the effects of one propaganda system than the other. We’re more steeped in Western propaganda than we are in Russian propaganda. It’s therefore more important, as westerners, to take note of the lies told by our own side than it is to question the lies told by Russia, which we only know through our own propaganda sources in any case. No doubt there are Russians doing the same on the other side. We should celebrate their bravery in taking to the streets to oppose Russia’s part in the war, but that’s only half of the story. The other half is that we should be taking to the streets ourselves. Is there a moral equivalence between what the West is doing in Ukraine, and what Russia is doing? Yes: both are led by an oligarchic elite that wants to manipulate our thoughts to profit from a war.

Not long after the Russian invasion of Ukraine I started hearing the phrase, “NATO is a defensive alliance.” I’d hear it repeatedly on the news as well as on social media. Good friends, shocked at the invasion, started using the line. It became an incantation, as if people were trying to convince themselves of the fact. Whenever I hear a phrase repeated it suggests that propaganda is at work and it’s time to engage my professional agnosticism.

The NATO website: “NATO is a defensive alliance whose members are committed to safeguarding the freedom and security of each other, against all threats, from all directions.” But it isn't true. NATO isn’t a defensive alliance. NATO was created before the Warsaw Pact, not after it, and continued to expand into new territories long after the Warsaw Pact had ceased to exist. It has been active in a number of war zones, from Eastern Europe to Afghanistan, and has moved closer to the borders of Russia. It's currently active in Ukraine. How can any of this be described as “defensive”?

It doesn’t take much imagination to recognize how this would look to Russian eyes, nor does it make you a Putinist to question NATO’s role in provoking and prolonging the war. Noam Chomsky said: “Citizens of the democratic societies should undertake a course of intellectual self defence to protect themselves from manipulation and control, and to lay the basis for meaningful democracy.”

It’s time to take a scientific approach to what we hear on the news as well as to the contents of our own brains; time to replace belief with theory. Whenever we hear pundits on TV channels telling us what’s happening in Ukraine, or anywhere else in the world, we should say, “Well it’s a theory” and leave it at that. Without visiting these faraway places, and testing theory against reality, we have no idea what’s going on. The fact that dissenting voices on the ground, like Vanessa Beeley or Eva Barlett, aren’t heard on our news media makes it clear that what we’re hearing is propaganda, not reality.

It’s good to doubt. We should doubt everything, especially our own conclusions.