They're not all named Christopher. 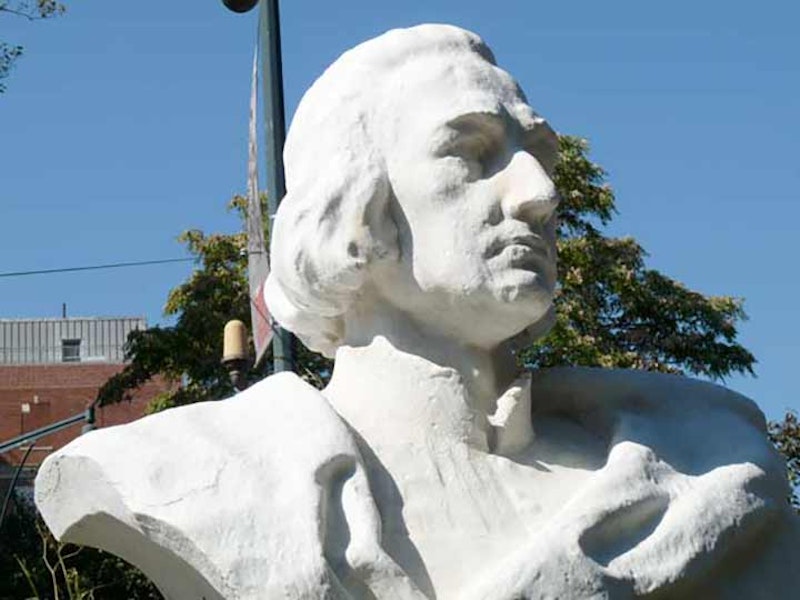 Christopher Columbus, an Italian sailing under the Spanish flag in 1492, was looking for a passage to Asia but arrived in the Caribbean instead. The subsequent events, which resulted in the establishment of the United States and numerous other countries in the Western Hemisphere, but also in the death and enslavement of thousands, can be debated as to which outweighs the other. I just carry a camera around the city taking pictures.

Columbus has retained a great reverence in American history; witness Columbus Circle and Avenue in Manhattan, Columbus, the capital of Ohio, and parades countrywide—and in the Italian-American community (re Cristoforo Colombo Ave., or 18th Ave., in Bensonhurst, Brooklyn).

There’s a striking Columbian memorial on Arthur Ave., at D’auria-Murphy Square, where E. 183rd, E. 184th, Crescent and Arthur Aves. all meet. The park’s centerpiece is a statue of Christopher Columbus that was moved here in 1992 from P.S. 45 on Bathgate Ave. and Lorillard Pl. It’s the work of Attilio Piccirilli (1866-1945) whose studios on 142nd St. and Willis Ave. produced the Maine Monument at Columbus Circle, completed in 1925, and the statue of Abraham Lincoln in the Lincoln Memorial. 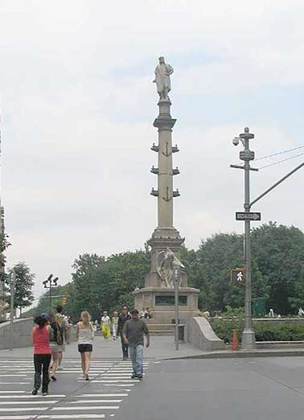 Gaetano Russo’s Columbus Circle monument was dedicated in 1892, 400 years after Columbus’ three ships arrived in the New World. The monument consists of a statue of Columbus posed on a column mounted on a base surrounded by fountains; an allegorical figure depicting the Genius of Discovery stands on the base. Both Columbus and the latter figure are carved of Carrara marble. Bronze elements include two bas-reliefs portraying Columbus’ journey, as well as an American bald eagle and lotus-shaped cresting. In addition, bronze ships’ prows and anchors adorn the granite column. The surrounding fountains, designed by Douglas Leigh, were inspired by water displays in Rome and were added in 1965. 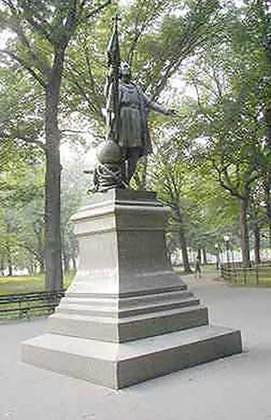 The 1890s saw many celebrations of the life and explorations of Columbus (unlike 1992, when the accolades were muted because of the increasing realization that Columbus’ arrival had disastrous results for Native-Americans). There was the Columbian Exposition of 1893 in Chicago, at which architectural ideas for the 20th century were proposed, as well as two massive statues installed in Central Park. (Ninth Avenue above W. 59th St. had already been renamed Columbus Ave. in 1890).

Spanish sculptor Jeronimo Suñol’s statue, at the southern end of The Mall, west of W. 66th St. in Central Park, is a close copy of his earlier one that was installed in the Plaza de Colon (Columbus) in Madrid in 1889. Columbus was commissioned by the Castilian monarchs, Ferdinand and Isabella, to find a passage to the Far East. Here, Columbus is shown with a flag, a globe and a capstan: a rope-winding device used on ships. 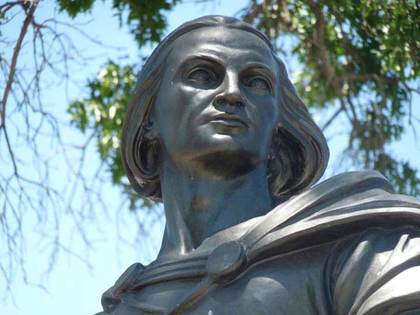 In Astoria, Queens, Columbus Square (modern signage calls it Columbus Triangle) is where Astoria Blvd., coming in from the west, becomes the Grand Central Parkway service road. Sculpted by artist Angelo Racioppi, the statue depicting Columbus, the Italian voyager sailing for Spain, seeking an easier route to the Far East was dedicated on October 12, 1941. It was constructed just before World War II by Italians living in Astoria, but couldn’t be erected because the residents couldn’t afford money for the statue’s base. The statue was dedicated on October 12, 1941. While hostilities with Italy continued during World War II,  the statue was moved to a city warehouse; however, fearing scrap metal drives, statue was moved again to the basement of the Queens Borough Hall. In 1945 the sculpture was reinstalled in its current location. It was donated by the New York City WPA (Works Progress Administration) Art Project. 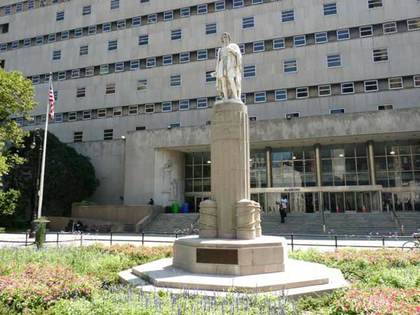 There are plenty of statues of the sailor of the ocean blue,  but this one, at the NYS Supreme Court Building on Court Street (officially, #360 Adams Street) has been around more than the other ones. This “Christy Colum” was sculpted by Emma Stebbins, who also fashioned the angel at Central Park’s Bethesda Terrace, in 1867, and exhibited in a little-traveled section in the northern area of Central Park and then into the restaurant area of the now-demolished McGown’s Pass Tavern in the park. When the tavern was demolished in 1912, Chris found his way to a Central Park storage yard near 97th St., and languished until 1934 when it was remounted in Chinatown. In 1971, during the Lindsay administration, it was mounted here, where it remains.