The Gods Live Beside Us

How a crow came into my life. 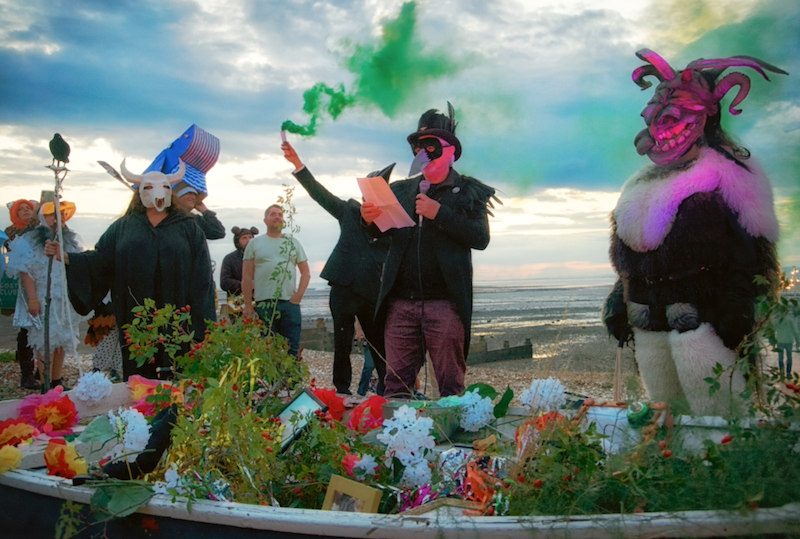 The above photograph was taken by Gerry Atkinson on September 10, 2022 on Whitstable Beach. The occasion was the Blessing of the Beasts, a public event organized by Whitstable artist Sadie Hennessy, combining animal-based entertainment with a ritual. The ritual took the form of a blessing for all our animal companions who’d stayed with us throughout the pandemic and beyond.

The character in the middle reading the blessing is Jack Crow. This was his first outing. He’s surrounded on one side by Krampus and on the other by a wild animal spirit-being of no particular lineage. You’ll see she has a crow on top of her staff. The costumes were designed by Christine Walton, another Whitstable-based artist.

Jack Crow is my alter ego. He’s the persona I’ve decided to adopt when I’m engaged in ritual work. His origins go back to 2016, when I had a series of weird experiences involving crows. It started off as a turf war. I was defending mine. I’d been growing some lawn on a long stretch of ground running the length of my flat next to the wall, which had died off. I’d scraped off all the old dead grass, broken up the soil, scattered grass seeds along the length of it, put some compost on top and began watering it. I’d been watering it every evening as the sun went down.

After about two weeks the grass sprouted, and the lawn began to take hold. Instead of the dusty strip of scrubland which had previously been there, there was a lush, green lawn. Then something strange happened. Bits of the lawn went missing. There were chunks of it dug out along the length of the wall and, occasionally, abandoned bits of turf lying on the grass a few feet away. After that I began seeing these two crows lurking about. They had a shifty look about them. Evil-looking creatures, like malevolent priests, with an arrogant gait and long, vicious-looking beaks, they were strutting about outside my flat, clearly up to no good.

I watched as one of them took the position of look-out, while the other disappeared under the window. I banged the window, and they flew off, and I could see it clearly: one of them was clutching a lump of turf in its claws. I guessed they were using it for their nest. Now I was at war. They could find some other bits of turf to use, I thought. During the day the crows would appear on top of the buildings opposite, like ragged black shadows flapping against the sky. They were reconnoitring the site ready for the attack.

I’d lie in wait concealed beneath my windowsill. When they landed, I’d leap up and shout through the window. The crows would scream back, cawing supernatural curses over their shoulders as they flew off. They were trying to break my nerve, waiting for me to surrender.

The crows won. They were more persistent and cunning than me. I couldn’t spend all day lurking about by the window to ward them off, while they seemed content to remain on the building opposite until I was out of the way. I gave up and let them take my turf. It was a nest they were building, and who am I to deprive another creature of their home?

I had a series of dreams about crows. The first just involved those two crows hopping about outside my window, challenging my attempts to stop them ripping up my lawn. In the second, I was driving a vehicle towards the traffic lights at the end of a road in my town. The lights were about to change to red and I knew I couldn't get to them on time. Then I was waiting at the lights, holding the vehicle at the biting point with the clutch and accelerator. The lights took a long time to change. Suddenly there was a giant crow, about the size of a man, with a monstrous, twisted, gray beak, hopping along beside the car. I was interested in this but the lights changed and I had to move off.

Finally, I was lying on my bed one afternoon trying to get some sleep after a bad night of insomnia. I dozed off and then there was the clear impression of something moving about under my bed clothes, something warm and vibrant. I woke up startled and, in that brief moment between sleep and wakefulness, had the clear hypnagogic impression of a large, black bird burying itself into my chest. I could feel the long, silken feathers as they ruffled against my skin, and could see the iridescent blackness of them shining in the afternoon sunlight. It was a vivid sensation, like an hallucination. I could feel the creature's warmth and tactile presence, before I finally awoke to realize it was a dream.

I began thinking about crows. They’re intelligent creatures: much more than other birds. Crows can recognize themselves in mirrors, are able use tools and can solve complex puzzles by planning for the future. These are cognitive abilities more often associated with non-human primates such as chimpanzees than other birds. They’re also mischievous and playful, as anyone who’s seen a crow taunting a dog knows. They’ll let the dog run at them, waiting till the last minute to take to the air, before landing a few yards further—just far enough to make the dog think that he still has a chance to catch them—before taking off again. Crows will play this game for long periods, until the dog gives up, exhausted.

The collective noun for crows is a “murder,” an undeservedly grim name for these otherwise clever and sociable creatures. They gather in large groups in urban parks and keep themselves busy with their raucous chatter. They seem to talk to each other, like disputatious lawyers arguing in court, or parliamentarians at a session in the House of Commons.

The name “John Crow” came to mind and I looked it up. I discovered that there were a few people of that name on Facebook, one of whom was a mutual friend of many of the people I knew. I contacted him. Eventually I went up to Southwark, on the South bank of the Thames, to see him.

John Crow turned out to be the alter ego of John Constable, a playwright most famous as the author of the Southwalk Mysteries, a modern mystery play in the medieval tradition, which was performed in Shakespeare's Globe and in Southwark Cathedral on Easter Sunday, April 23rd, 2000, and again in 2010 in the Cathedral. I’ve met and spoken with John many times after that meeting, and have the transcripts of a couple of interviews we did which I hope to use one day. John’s a wise, intelligent, magical writer of some distinction, who I’d recommend to any of my readers.

That might’ve satisfied me, and for a number of years it did. I’d found my John Crow, and he was already engaged in the sorts of magical practices I imagined any self-respecting person with that name would. But it wasn’t enough. I had another dream in which I made friends with a crow. It had a message for me. It was hopping about amongst the autumn leaves on the forest floor, with something in its mouth, maybe a note. I must’ve startled it as it hopped backwards and hit its head on the low-slung branches of a tree. After that it was disorientated and leaned against me for protection. It was resting against my leg, nuzzling, and I was stroking its feathers. The dream was vivid. I could feel the crow's pulsating warmth beneath my fingers as it responded to my touch. I knew I could train it and make friends. After that, as the dream shifted and I found myself in other places, in other circumstances, immersed in the human world, I still remembered the crow dream. I wanted to tell people about it. “I've had a really wonderful dream,” I'd say, and I'd remember the crow and the feeling of rustling warmth against my leg.

I knew then that the John Crow in question was someone else: not my newfound friend from London, but someone much closer to me. He was my own alter ego, a creature born in wild nature, who was destined to become my guide. I came up with the name Jack Crow and decided to dress the part.

I already had the top hat and the tails which I’d worn many times in my role as one of the organizers of the Whitstable Carnival. The top hat has a caduceus on the front, which is the symbol of Hermes, the ancient Greek trickster god associated with crossroads and communications, theft and magic, as well as moving pageants. He’s most often identified with Mercury in the Roman pantheon, and Thoth in the Egyptian. As Hermes Trismegistus, he represents all three and is the originator of that brand of classical literature known as Hermetic, which at one time rivalled the Bible in its reach and influence. He’s my tutelary deity. I see Jack Crow as his emissary on earth and myself as his willing vessel.

He’s here now, sitting alongside me as I write: a crow who’s also a man. A man with a crow’s heart, a crow with a man’s words. We plan to write a book together. You shall hear it when it’s done.