The future was here and I'm just trying to catch up. 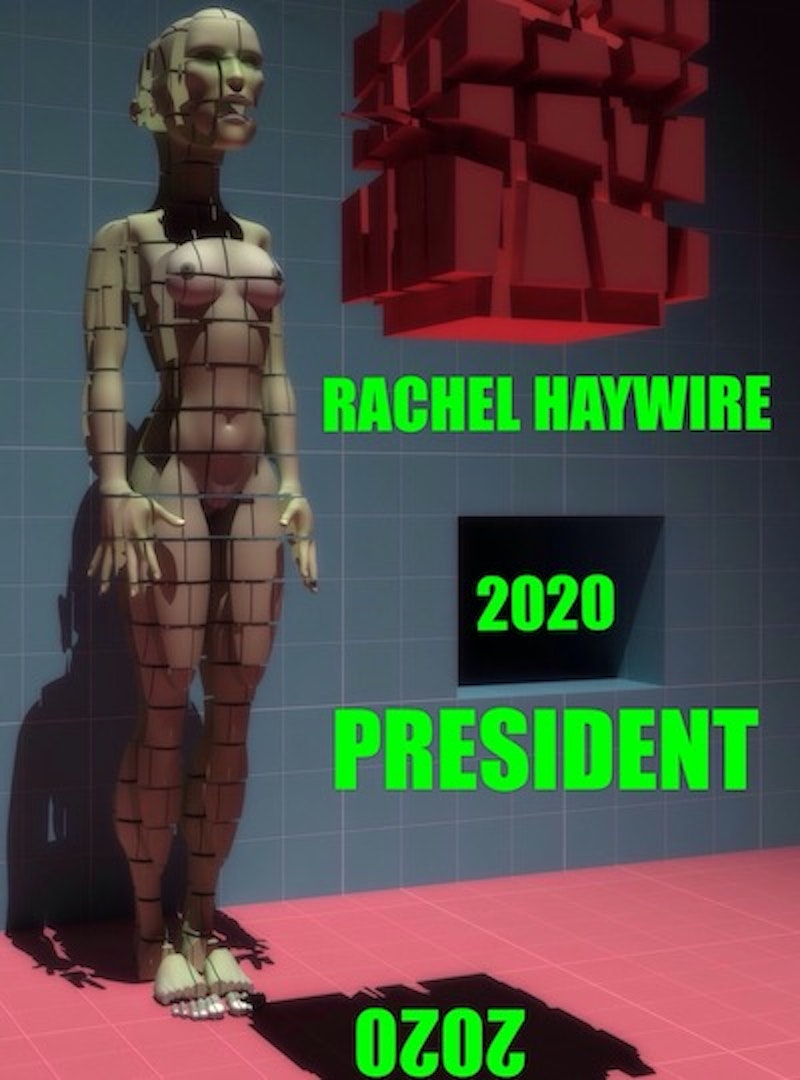 Earlier this year I heard the incredible news about a colleague at Splice Today. Her name’s Rachel Haywire and she’s running for president, representing the relatively new and growing Transhumanist Party. The platform is a combination of science, health and technology, as well as including the arts, music and humanities. It's an agenda of transformation for the human condition, discovering new ways through technology to enhance life for Americans. Anyway, that's my take on it. At the moment she’s a highly visible candidate among a handful of contenders within her party.

I don't vote or endorse any political party. I've heard the arguments all my life about why my vote counts and how exercising my rights is so important. Observing the political landscape today one can see how bogus that is. Duped by hacked voting machines, voter suppression, Russian interference or gerrymandering. My milk turned sour decades ago with Nixon. Kennedy was no exception either. Please save the lectures. When it comes down to church and state, count me out. The separation was imaginary to begin with. It was permanently deleted in the make-believe world of what's real or not. When religion can dictate politics we're all fucked.

The Transhumanist Party, or USTP for short, is a mishmash of ideology with some spiritual philosophy plus a generous combo of artificial intelligence, augmented reality, virtual reality, cryptocurrency, cryogenics and cybernetics. The Internet of everything. The future was here and I'm just trying to catch up. I find all this exciting and hopeful in my dotage. It would be cool to be cryogenically preserved or have my brainwaves connected to a database where I could exist eternally within an internal micro-chipped external matrix. A world of my choosing where anything I think or dream becomes real.

I'm talking out of my ass, but this is the new wave becoming the norm for today's tomorrows. If we can wake up from this nightmare of reoccurring historic indigestion. To see beyond our own shortcomings. I’m fed up with the current daily assault to my senses. Bombarded with bipartisan bullshit from histrionic hate-mongers. My wig is spinning from self-interest interlopers who stand in the way of my pursuit of happiness. The hackneyed rhetoric of yesterday's failed political parties. They offer nothing but business as usual.

Rachel Haywire can become a major force for independent thinkers who’re disgusted with the old two-party system. This is a new way of looking at problems and asks how can we make them better. The old forms no longer function. Our archaic institutions and belief systems no longer hold basic truths. Outdated modes don't stand up in today's dirty business world games.

Rachel’s stance offers promises that would make any weary voter tired of the same old crap take notice. Affordable healthcare for all with cryptocurrency medium options for special treatments. $2000 a month for everyone of working age. An end to overseas intervention. Restrictions on imperialist global trade. Decriminalization of all non-lethal substances.

Haywire doesn’t spout slogans of empty promises. Catchphrases like "no new taxes" and "the time is now" can't hold water in this soggy old republic. We still have no life preservers. Like highwire performers, we fly dangerously low to the horizon.

Most people haven’t heard of Transhumanists or Haywire. That shouldn’t stop any free thinker with a thirst for change to investigate and learn what it’s all about. She’s no pretender to the throne or naïve enough to believe she has a chance in hell to win the presidency, but is encouraging for the near-future. Haywire makes sense in a world gone crazy. It’s time to take out the trash that’s been piling up around here. The Transhumanist Party could gain momentum if and when more people open their minds and wallets to a philosophy of change. We must start somewhere.