All tricks and no treats. 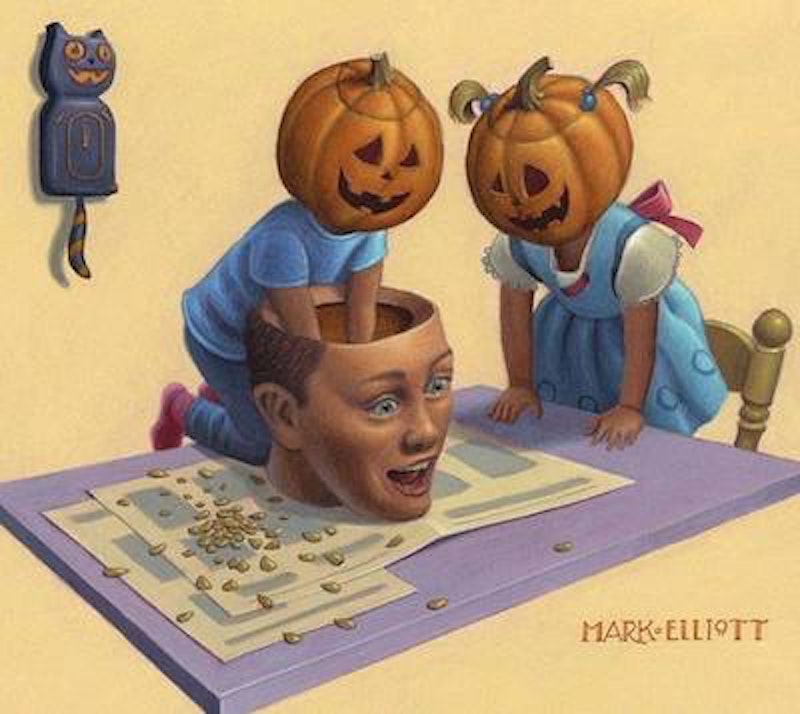 Christopher Columbus is unceremoniously outed for the genocidal maniac that he really was. Rest easy and declare that bogus holiday renamed officially as Indigenous People's Day. There's one big win for the Indians. How could Columbus discover and claim rights to someplace that already existed? Out of some weird honor and guilty respect to Indians who were massacred to make room for people like you, me, John Wayne, sports franchises and Ronald McDonald we celebrate.

Recent protests around the onetime staple holiday reports vandals poured red paint all over his exploitative explorer statue likeness on tacky obelisks and monuments across the not-so-great land. On Columbus Day in Baltimore some anonymous protester draped a pair of fake severed bloody hands around the neck of his marble likeness located at the foot of President St. Another monument to the exterminator of noble savages, an obelisk dedicated to Columbus, was smashed at Herring Run Park near Lake Montebello.

Speaking of smashing monuments and presidents, Trump has blood on his hands too. It's a matter of time before he's impeached and imprisoned along with his family and idiotic cohorts. They'll do hard prison terms. The best possible outcome, believing his gang of miscreants and halfwits will actually do real time is a real stretch of the imagination. Will these slimeballs get away with every last crime they’ve committed? Probably not. Did the Bush's and Cheney do any time? Or any president in the long lineage of those evildoers do time? If there is any justice it will be swift and well deserved. Just like Rodney Dangerfield and Aretha Franklin can't get no respect, we the people never get any respect or justice either. Don't let the blood rush to your head. R-E- S -P-E-C-T. If you go around demanding it you might get some. Sure as shit we should.

I'm sick of dealing with humans. Other people. Other people’s shit, hopes, fears and dreams. To love the hate you help create. You can't escape the reality of other people. Unless you’re a recluse hermit, never seeing daylight or people. Trying to get along with others is the real test. Other folks’ Hell is filled with a bunch of nobodies thinking somebody's trying to be greater than everybody. The biggest pumpkin in the patch. All this hugeness makes for cheap talk, loose change and small potatoes. Empty promises invite invisible sentiments. Your bliss is my Hell. My bliss is ignorant.

In some way, it's always right here. A constant reminder of the struggle of now. Trying to make the extra effort. That little oomph kick in the ass, head or balls. A double shot of blinding reality. The sweet lies of normal everyday living truth. Boring boredoms of mediocre daydreams. Swallow your bitter pills.

The pumpkin invasion is upon us. They're everywhere, lined up like soldiers in country markets and roadside stands. Piled high in crates outside the grocery store like the heads of the vanquished. They sit like lumps on porches waiting to slowly shrivel and rot. Kids and adults alike love to carve ghastly faces into these orb-shaped gourds. The lowly pumpkin is now a scary head. It's all part of a Halloween tradition that goes back to the Irish who carved out turnips and placed red hot embers in them to light the way for good spirits and ward off evil ones. It takes a shitload of pumpkins to ward off the evil around here.

Carving grimacing faces in pumpkins and placing candles inside them evolved from that centuries-old Celtic practice. Later becoming popular in America as the Jack O' Lantern. Today the holiday is a great marketing ploy for everything in excess. Candy and costumes, decorations and props to transform you and your home into as creepy as you can afford to make it.

The Halloween industry melts together with Thanksgiving, Christmas and New Years at the mega party store. As kids, my sibs and I had to improvise and make our own. Everything from cowboys and Indians to soldiers and robots. I was always either a hobo or a ghost, which has morphed into the story of my life. Who knew dressing down like a bum carrying around a bag filed with sugary confections would haunt me the rest of my days like a diabetic ghost. Just an old sheet with eye holes hacked into it with scissors isn’t scary but in the dark walking along the neighborhood streets it could evoke the primal fear of the reaper.

You know autumn’s arrived when the insidious pumpkin spice infiltrates everything from coffee and donuts to candles and air fresheners for your car. Nothing stinks worse except maybe a filthy men's room. I can think of a few other things that can compare too. Some of them are orange and empty-headed. All tricks and no treats. They smell like death and are just as scary.