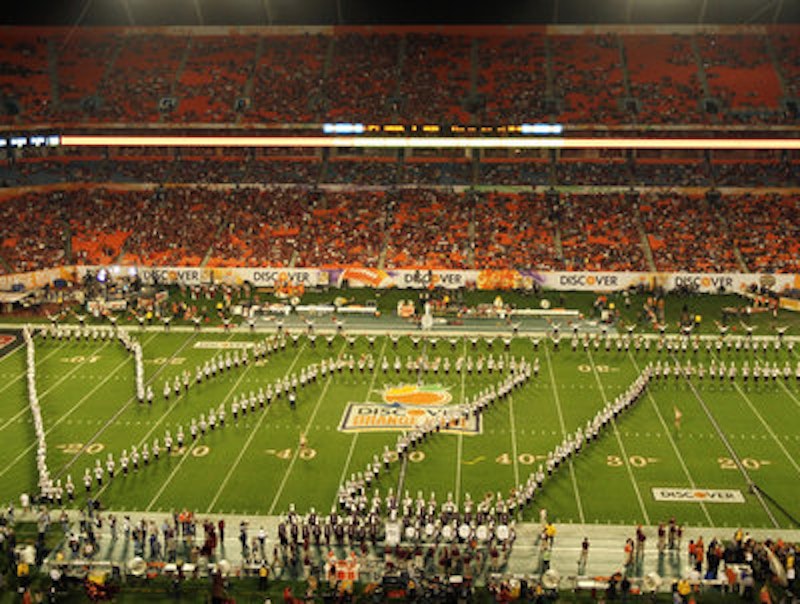 I knew how to be a high school marching band mom. I love my daughter, a clarinet player who eventually became the Drum Major, but I hated the Friday night football games, so I volunteered in the concession stand and made cheese fries. I was a really good cheese fry maker. I made a lot of money for the marching band, sometimes filling several hundred orders on a busy game night. I only saw the halftime show on Senior Night, but I watched the field show during her Saturday competitions instead. That way, instead of being surrounded by people who stood up to rustle around and leave and make noise during halftime, I could watch the band perform while sitting in the stands with people who were quiet and respectful and there to watch the band.

And those simpler, hometown Friday-night-lights games are over. My daughter graduated, and a few weeks ago made it as one of two freshmen clarinet players into the prestigious Virginia Tech Marching Virginians marching band. Suddenly, I’d landed (thanks to my husband’s eBay score of tickets and a parking pass) in elaborate tailgate-party, Division 1 college football game-day land. First, we made the mistake of arriving less than an hour before the game started and had to navigate an undecorated (and therefore suspicious) car, bedecked only with my son’s handwritten “VT Marching Band” in the dirt on the back windshield, through hundreds of very well-wined-and-dined, boozed-and-schmoozed fans who had clearly been there for several hours if not days.

My 13-year-old daughter, 10-year-old son, husband and I were all wearing Virginia Tech t-shirts, but we were severely underdressed without face makeup or stickers, wigs, earrings, shorts, shoes, socks or other orange and maroon pom-pom Hokie-like-it’s-Halloween gear as we walked through the crowd and made our way to the seats. Do not get me wrong. Everyone was accommodating, saying “Welcome to Virginia Tech” at the gate, or even “Welcome Home” which seemed very home-y. However, on being seated, I immediately wished there was a band section, where I could peacefully observe the marching band, take photos of them, and be around other band parents who are also there because their kid’s in the band and not because they are a Hokie alumni/lifer football fan. I want a shirt that says, “I’m just here for the Marching Virginians Halftime Show.”

The mood in the stadium was electric as the team entered the field. The sea of orange and maroon rose to their feet and I didn’t know what cheers we were supposed to be responding to (something, something, Hokie, Hokie) as the team made its way onto the field. I realized I was too far away to figure out which kid was mine in the 330-member seated band and that it was going to be a long time till halftime. The game started as I struggled for a second to figure out which team was which again, I mean honestly they were wearing almost exactly the same colors, and when the band made a certain “fanning” hand motion that looked to me like the “we’re not worthy” sign from Wayne’s World, the student section behind them made it too, and then the fans. I asked a girl who looked like a student in front of us what it meant. She narrowed her eyes, wrinkling the paint on the colored Hokie streaks on her cheeks and answered, “It means block.” Her mother beside her turned and gave me a death glare, huffed audibly, and said directly to my face, in a disgusted Southern accent, “If you don’t even know what that means, why don’t you take your family and your damn Yankee ass straight back up to wherever you came from up North because you don’t belong in this stadium if you don’t understand football!”

Okay, she didn’t say that, but her death glare did. Actually, she just turned to her daughter, rolled her eyes and said loudly, “She doesn’t even know what that means.” Shocked that she would be so unwelcoming, I leaned over and said, “It’s our first time here. My daughter’s in the band.” She completely ignored me, and then I was mad at myself for talking to her. When she rudely got up and stood in my way as the halftime show started (because, to the football people, halftime is when you go get food, which I’d gotten during the first quarter) I had a hard time not dumping leftover mustard-covered pretzel into her Hokie visor, too, because, after all, I didn’t walk in front of her and disrupt her view of the game.

I refrained from starting any additional potential marching band mom Wars of Northern Aggression. There were two men a few rows behind me loudly, drunkenly arguing over the recent past retired coach Beamer and how he would’ve handled or not handled things differently should he be here now, which he obviously wasn’t, which didn’t stop them from fighting and cursing about it, which made other people curse, which upset the mother with young children next to me. After the halftime show, I follow/stalked the band back to their seats to sneak a photo of my daughter even though she would kill me if she saw me in the student section.

A podcast. That’s what I decided I want. A live Marching Virginian podcast that I can listen to on Beats headphones during the game. It will block out the football game except for pertinent information about scoring and appropriate cheering with instructions on what arm motions and hollering is to occur at what times. The podcast will inform me of what pieces of music the band is playing, historical facts about the band, introductions of the Drum Majors and trivia facts about how many kids are in different sections this year. Perhaps what sections of the stadium are best to try to buy tickets in on eBay, how to meet other band parents, and strategies on how to appear interested in the game with only minimal knowledge of football.