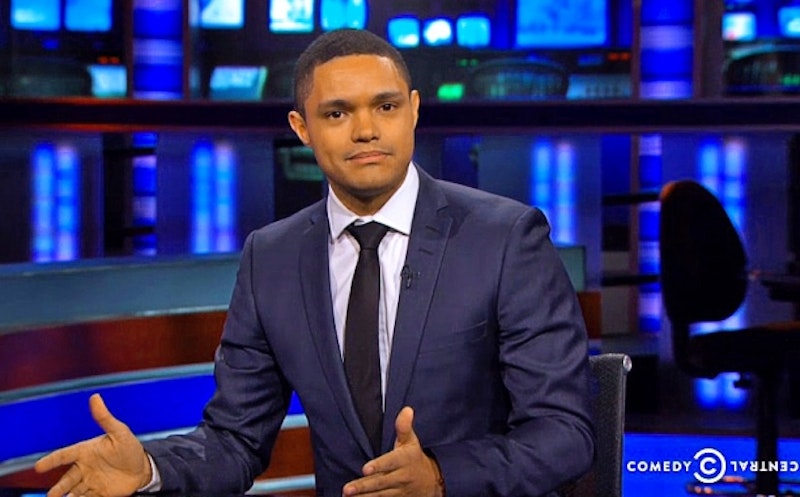 I have some problems with Trevor Noah’s Daily Show that have nothing to do with rhetorical disputes. My biggest issue with Noah is that he spends far too much time guffawing at the jokes he just read, which are generously worth a chuckle. His interview style also gives me hardcore second-hand embarrassment. But by and large, Noah’s Daily Show has flown under my radar—I don’t have much reason to take it to task.

After the show’s all-transgender episode in April, I especially thought I’d have cause to leave Noah and his cohorts alone. After several segments on trans issues, including a masterful correspondence piece by Jessica Williams, Noah invited Angelica Ross on the show to chat about activism and trans empowerment. He asked in particular about cis engagement, saying, “A lot of people are afraid to talk about it. I know this personally. You want to get involved. You are not just ‘not opposed’ to the transgender community, but you actually want to support it. A lot of the time, it feels like the conversation is hindered by the fear of saying the wrong things.” Ross was blunt in her response—”Google”—but I could appreciate Noah’s ability to admit that he was capable of saying something hurtful regardless of his intent.

That’s something that often eluded Noah’s predecessor Jon Stewart, along with his rotating team of correspondents. Content note for transphobic slurs. Over Stewart’s 16-year run on TDS, he frequently made use of transmisogynistic humor: he joked about a possible transgender Supreme Court nominee as “the craziest thing” and “Justice Chick with Dick,” facetiously talking about the number of times he “picked up a tranny hooker at a truck stop,” and claiming Alabama governor Bob Riley likes “banana pudding when served off the breasts of a Thai shemale.” Correspondent Rob Riggle once called the now-beloved John Oliver a “pre-op tranny,” and even Samantha Bee, whose new show Full Frontal is a savage delight, once displayed a picture of a trans woman of color during a video segment with the voiceover descriptor “whatever this is.” Predictably, Stewart and co. began hypocritically attacking Republicans for being transmisogynistic in 2013, when such remarks were no longer trendy.

By comparison, then, even Noah’s lukewarm condemnation of bathroom bills in May—in which he portrayed discomfort with trans people as something that’s understandable but outmoded—is leaps and bounds ahead of what Stewart considered progressive. So it’s in the spirit of making a mediocre institution better that I call Noah to task for a bit he did on Wednesday night’s show, comparing irritated consumers who don’t like the headphone plug-less iPhone 7 to anti-trans bigots.

Before introducing correspondent Hasan Minhaj to do a Steve Jobs impression, Noah did his own impression of a person who’s resistant to change: “This is literally the same way people react to the transgender conversation. It is the same argument people have. ‘It’s not natural! It used to have a thing and now it doesn’t have a thing? How am I supposed to—I grew up and it had—what are my kids gonna think?’ Your kids think it’s normal. ‘Well I don’t! I don’t! I want it back to the old ways.’”

Comedy is always going to oversimplify things, but if you’re trying to tackle something as thorny and multi-faceted as transgender identities, it really shouldn’t be in a throwaway joke about new gadgets. When I watch that clip, I have to wonder what Noah thinks of people like me—trans people who don’t experience much, if any, genital dysphoria and who may not want bottom surgery—or if he thinks of us at all. (I realize I sound like Patton Oswalt’s whiny uber-SJW when I say that, but given Oswalt’s stunning misunderstanding of just about everything trans-related in his latest special, I think I’ll live.)

But this is about way more than just whether or not the joke represents all trans people (an impossible feat). It’s about scale, and making appropriate comparisons. I’ve yet to see anyone threaten Apple CEO Tim Cook’s life over his decision to go with wireless ear buds, but plenty of threats toward people I know who are transitioning. My Twitter pal Ellen McGrody wrote about her reaction to Noah’s jests, saying, “Apple customers ‘freak out’ over the lack of a headphone jack, the same way I ‘freaked out’ when an Apple customer... badgered me with questions about my genitals over and over again until I left the floor crying.” The two situations may seem similar in a “The world is passing you by, old man” way, but the similarities end there; one is a tame tale of the grating forward march of technology, and the other is a constant phenomenon which ruins lives.

Framing the narrative this way makes it seem like trans lives, which aren’t the focus of the piece, are subordinate to the fluff that is. I’d much rather have seen Noah or a correspondent save this joke for a later piece on transphobia, belittling bigotry by telling people history will leave them behind. (At the very least, we should’ve gotten a “male/female” port joke. Step up your tech game, writers.) As it is, it seems as though Noah and his writers were trying to create the ultimate trending topic in 2016: transgender iPhones. But all they did was torch some of the goodwill they’d begun to accumulate since Stewart’s overdue departure.

Do I think Trevor Noah is a transphobe or a transmisogynist? Yes and no. While cis folks in general have a lot of transphobia they’ve absorbed through pop culture, Noah’s shown some dedication to dismantling that within himself and pushing trans acceptance forward in pop culture. But a handful of solid segments don’t give someone a lifetime-pass Ally Badge. If Noah wants to tell trans jokes as a cis person, he’s got to make sure they’re not painfully reductive—or just stop talking.