Ragamuffin days are long gone, but with photographs we remember. 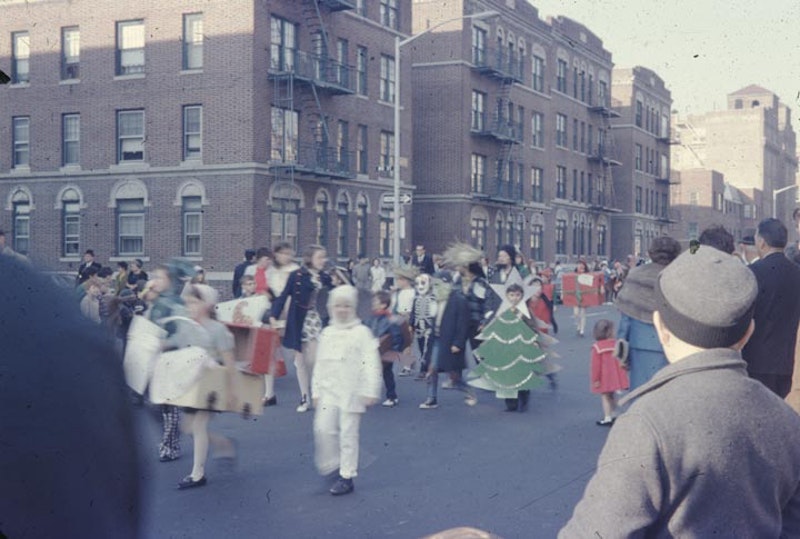 It’s clear, at 63, that I’ll never be a parent. That’s just as well, because I was a crashing failure as a child, at least in the conventional sense. I never ran the streets and caused a ruckus; never “played,” except for imitative digging in the dirt in homage to the Gowanus Expressway under construction across the street; never “dreamed” of being a cop, cowboy or astronaut and never pretended at being any of those. (I thought about being a mailman, figuring it was the easiest option.) I had friends, but was never in a posse. I didn’t develop close friendships, or at least regular ones, until my college years in the mid-1970s.

I think children’s personalities begin to “gel” at around age eight. Going by old family photographs, I was a happy and well-adjusted kid till then, and was frequently photographed smiling. After that, though, I developed my own mind and preferred solitary activities, most of which involved filling copybooks with drawings of lampposts and reading about nature, science and science fiction. To this day, my preference runs to documentaries about NYC, biographies, and natural histories: very little fiction. I hated vacations, because I was on my parents’ schedules, not mine; I endured being away from home for a couple of weeks, but it wasn’t real enjoyment. A constant refrain from my parents was, and I remember the word distinctly, was “Why can’t you be more congenial?” My congeniality hasn’t improved much since, but I focus it inward, not outward. I’ve always been self-contained, and as a child was especially indifferent to things in which I had little identification.

This week’s photos come from my father’s stash of images from a couple of Bay Ridge parades in 1966: a big one for St. Anselm Youth Activities in the spring, and the first Ragamuffin Parade, in the fall. To its credit, the parish of St. Anselm had a well-developed sports program and its awards show, held in mid-May, attracted well-known sports celebrities. I wasn’t particularly athletic, but did participate in “youth activities” as a Cub Scout, which involved being involved in arts and crafts projects, which I didn’t mind.

In 2016, the corner of 3rd Ave. and 74th St. was named Ragamuffin Way in honor of Bay Ridge’s annual Ragamuffin Parade, the only NYC parade that’s specifically held for children. Since 1966, when it was on 4th Ave., children have donned Halloween costumes and paraded up one Bay Ridge avenue or another, accompanied by marching bands and floats; similar “ragamuffin parades” had been a NYC tradition in previous decades. 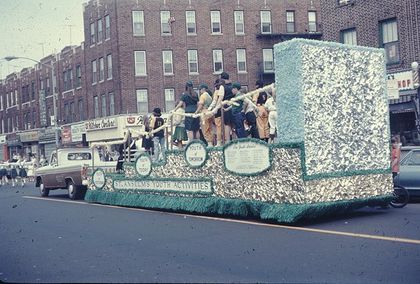 St. Anselm Youth Activities had this float in the spring 1966 parade and it looks like something out of the final scene in Animal House. The cartouches read “Youth of yesterday, youth of today, youth of tomorrow.” In 1966, the “youth of today,” many of them, feared getting shot in Vietnam, but on this day, the kids in various uniforms, for schools, Scouts, and baseball teams, were enjoying the fete. 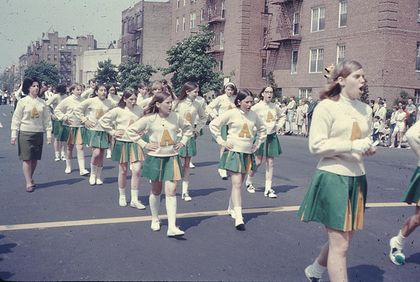 Looking back from 2020, after over five decades, I’m struck by how militaristic the parades were. Here’s a group of St. Anselm cheerleaders, marching in formation and no doubt, doing the various chants they’d perform at football games. A matron was on hand to make sure everyone was keeping the march. This is at 4th Ave. at 82nd St.; here, they’re passing directly in front of the church. If you took the photo here in 2020, nothing at all has changed on 4th Ave. 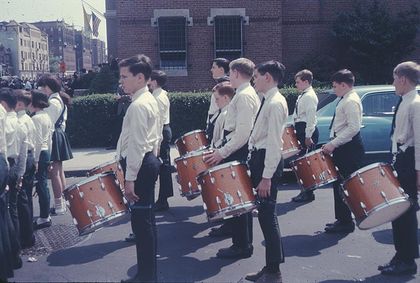 I’ve always enjoyed iconography that includes uniforms and colors, though infrastructure is my overall brand and I leave uniforms to my friend Paul Lukas at uni-watch.com. Both the cheerleaders’ uniforms and the school uniforms seen here were in the then-St. Anselm colors of white, green and gold, with gold shirts and green pants on the boys. When I was in 7th grade, St. Anselm changed their colors, going with white, gray and maroon, but I much preferred the green and gold. I still use a tie clip I acquired in first grade. 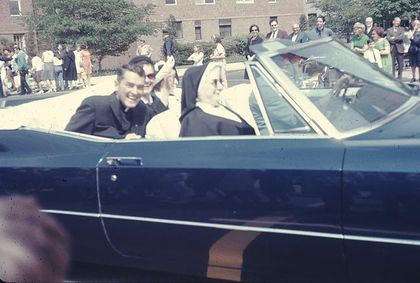 Father Kenny (after all this time, I forget his first name) who I characterized as the “handsomest priest in Brooklyn” after not dealing with any better-looking ones throughout my grade school and high school career, rides in the Youth Activities parade with a gaggle of nuns, one of whom was Sister Marcella, the music teacher, who was riding in the front seat. Marcella was pretty much the only nun I got along with at the school; the other ones treated me with sardonic wit or outright contempt. 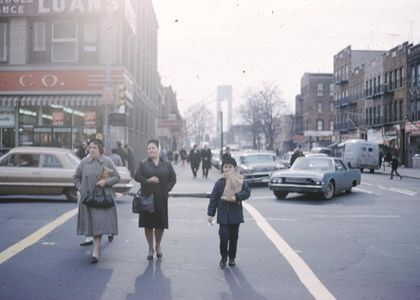 In December 1965, the old man got a photo of me crossing the street with a bagful of groceries at 5th Ave. and 86th St. The Verrazano Bridge, opened in 1964, provides a backdrop. Throughout my youth, the F.W. Woolworth 5 and 10-cent store held down the corner at 502 86th St. People in general look rather younger in 2019 than they did in 1965. The two women in the photo are, I’d say, between 45 and 55 in age, but today, with more youthful outfits and hairdos, they’d each appear younger than they do here. My mother didn’t wear high heels to go shopping but this style coat and kerchief were staples for her. Had she been born later on, she’s look completely different.

But what do I know about fashion?