Posterized: The Power of the Dog

Let's go camping again in the mountains and shoot ourselves some fresh elk liver. 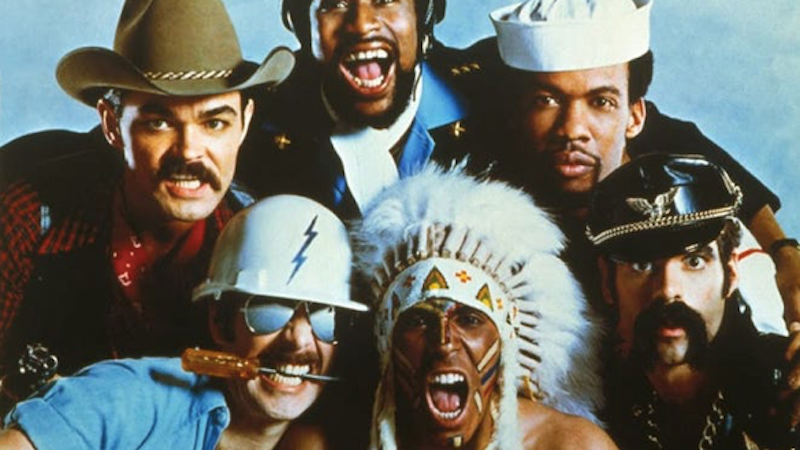 There are three evidently-gay characters in Jane Campion's film The Power of the Dog. One of them, appearing onscreen only as a cowboy legend, is named "Bronco Henry," which I think was also the name of one of the Village People. Another is a self-loathing homophobic bully, to whom Bronco Henry has bequeathed his collection of muscle magazines featuring Sandoz the Magnificent. The third is a diabolical murderer. The Power of the Dog is Brokeback Mountain gone very bad, or possibly phobic.

Bronco Henry taught the brothers played by Benedict Cumberbatch and Jesse Plemons how to cook over an open fire, how to manage a ranch, and above all how to ride, for he was the best rider ever. "Well, just by sitting there [on a saddle on a saw horse] you’re soaking up all the riding know-how you’ll ever need and then some. That saddle belonged to Bronco Henry. Greatest rider I ever knew." I'm told that Bronco Henry will be played by Lil Nas X in Power of the Dog 2: Kennel Tales.

The character of Bronco Henry is established by Cumberbatch telling stories around the campfire. One time, on a bet, Bronco piled up all the furniture in a town in the middle of the street, then jumped the most broken-down nag available right over the pile. That seems unlikely, and puts old Bronco in the same category as Pecos Bill: the sort of man who can drink the Colorado, leaving the Old West in drought. But Bronco Henry was also, at the same time, the sort of cowpoke who ordered monogrammed handkerchiefs. Not monogrammed with his initials, mind you, which might have been, let's say "HS" (for Henry Smith), but with "BH" (for Bronco Henry). And, he was very cuddly, and his handkerchiefs make good solo sex aids.

"Let's go camping again in the mountains and shoot ourselves some fresh elk liver," suggests Cumberbatch to Plemons. "Cook it right there on the coals. Like Bronco Henry taught us." Now perhaps these lines were in the original novel by Thomas Powers and aren’t directly blamable on writer-director Jane Campion, who’s currently collecting awards for her efforts.

But I'm not sure we can release Campion from responsibility for exchanges such as this:

"One person in particular taught you and me ranching so we damn well succeeded."

One problem with the film is who to root for: Kirsten Dunst's character is nice, until she descends into alcoholism. The Plemons character doesn't say anything. Cumberbatch is unbelievably tormented by his sexuality and the loss of beautiful Bronco Henry, and hence treats all humans like garbage. The young gawky guy seems sympathetic until you realize how much he likes to dissect animals, and that he's working on procedures to infect people with anthrax. Cumberbatch's insane assholery, admittedly, appears to be getting ameliorated toward the end. But at that moment he's killed.

The other problem is that the non-stop camp seems to be accidental. This movie needed to be a lot less serious and a lot more fun—in short, a lot more Village People—or it needed its seriousness to be more believable and sustained. A real tragedy just can't revolve around Bronco Henry, Sandoz, and anthrax; those are comedic elements, I fear. Also, as Bronco Henry taught people to ride, jump over furniture, and eat elk liver, was he aware that he was in New Zealand that whole time? Or was he under the impression that he was in Montana?

—Lin Manuel Miranda's In the Heights

—Michael B. Jordan in Tom Clancy's Without Remorse