Posterized: In the Heights

"Representation" is not enough. 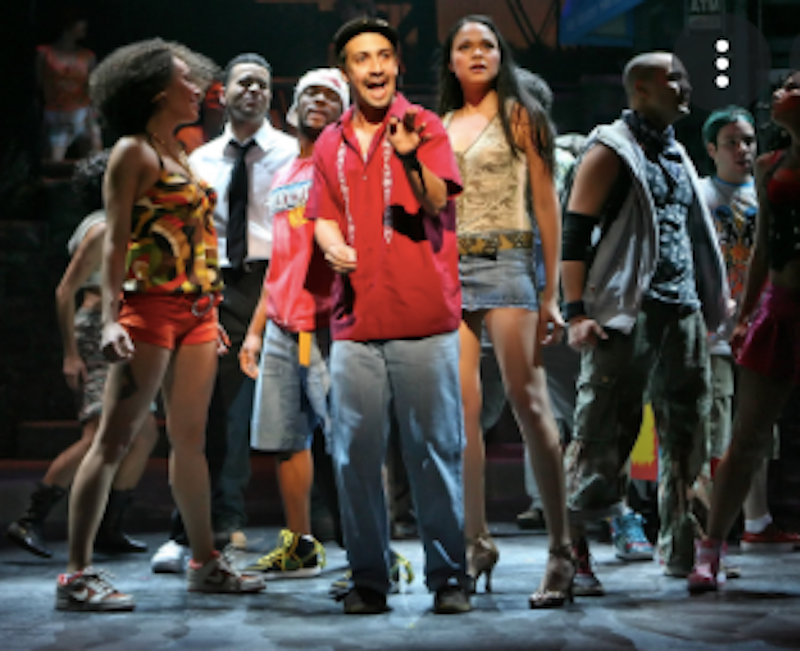 People seem to watch movies these days to experience the skin tones of the actors and gauge them for similarity to themselves. Admittedly, this is made more difficult by stage make-up and the fact that the fashionable skin shade of now is Beyoncé gold, which is its own new race, or would be, were it biological. At any rate, “representation” right now entails matching skin tones like paint samples, and it’s the great theme of contemporary entertainment: Looks like me! (sorta).

Lin-Manuel Miranda had been a hero of the skin-color-matching movement in the arts. He understands, as only today's commonplace-mongers really do, that “representation” as skin-tone matching is the only real theme of today's art, the one thing that matters. His work is all about “identity,” which is also a matter of skin-tone matching. That's why it was surprising when In the Heights—the movie musical for which Miranda supplied the songs and Quiara Alegría Hudes the dialogue—was broadly slammed for not having enough Afro-Latinx cast members. Miranda apologized abjectly. It may be that he made this mistake by trying to match the whole cast to his own skin color.

What “representation” means here is definitely not, as Plato would have it, holding up a mirror to reality. It entails relentless positivity about whatever group is depicted, and it’s supposed to swell members of that group with self-esteem and thus allegedly transform their lives. The characters are collective emblems rather than individual persons. That's how Black Panther cured race in America.

But “representative of her ethnicity” isn’t enough to make a convincing character, and In the Heights is a completely unconvincing film. It gets caught between "this is the reality of my people's lives" and "here it is with all the sunny, overwhelming artificiality of a Broadway musical." It's no more realistic than West Side Story, and it's definitely not as well-written.

Manuel's songs are unmemorable at best, very standard-issue sub-Sondheim with a patina of salsa (the choreography is pretty great, though). But it's Hudes' dialogue that sinks the film. It's all collective representations and no individual persons. It's intended to pound you relentlessly with its positive self-esteem message; it's a work of psychological manipulation, not art.

"Nina: spelling bee champion, valedictorian." The one who "made it out" (of the sweetest, tightest, most nurturing neighborhood on the face of the earth), to Stanford, where she was all, like, "What am I doing here?" Above all, she's a pretty girl. "Vanessa: tough as nails." She never shows any sign of that, however, being the delightful little cupcake, maybe cast as a Natalie Wood lookalike. Above all, she too is a pretty girl. "Abuela," the nurturing mother figure whose last words appear early: "I took care of my community, didn't I?"

That's just not the way a human being talks, thank God. But it is the way all the characters talk here, as though they just inherited some high-school-level pseudo-realizations about reality: "Our people survived slave ships!" shouts or sings a person with no apparent African ancestry. "We survived conquistadors!" she urges, though there's also no apparent trace of indigenousness. "Dad, I know what I have to do. You've given me this amazing education, and now I just need to use it, so that every undocumented kid gets a pathway."

I kept waiting for the cast to break into a tuneless number along the lines of "I am a representation!" But it gets confusing down this line. At one point they start putting up portraits of Latina heroines (Frida Kahlo, Celia Cruz, Sonia Sotomayor) in a little gallery, while singing about “role models.” The Heights is woke, alright, but there are no particular persons in it, only general truths. "If you work hard and play by the rules..."

It features the sweetest blackout in NYC history, the opposite of 1977 as portrayed in Spike Lee's Summer of Sam, for example. There's mention of “rioters” but no sign of them. The community pulls together and launches into an interminable "Carnaval del Barrio." Abuela expires beautifully. Love triumphs, and there's no place like home, and no home like skin tone.

Anthony Ramos gives a strong performance as the main character Usnavi, originally played on stage by Miranda. If he was as much a sheer prop as the girls, this would be the worst movie ever made. As it is, Ramos has helpfully compressed the whole movie into an ad for Crown Royal, directed with superior sagacity by Spike. Just watch that.

Hamilton is better than In the Heights: the music and the dialogue are much stronger, the hip-hop has a certain integrity as opposed to being merely a Broadway bowdlerization or parody of the style. But it also has some problems. Like In the Heights, it’s way too long. Lin-Manuel as Hamilton spends the second half of the script as a dog—shamefully neglecting his lovely wife, having affairs, dueling, etc.—and he's redeemed only by the fact that Miranda seems to feel really, really bad about it and to be sobbing with his head in his hands all the time. Alexander had more backbone, I speculate.

And Hamilton, though it takes a more sophisticated approach to representation than In the Heights, ends up in a racial cul-de-sac. It was refreshing for a moment to have black actors playing Washington and Jefferson. But this disables the play from taking on issues of slavery and race in the early republic at all. There's a brief mention of Sally Hemings, but is Miranda depicting black planters owning black slaves? Miranda could’ve race-reversed the whole thing, but that would make it a completely different sort of work of speculative fiction.

And, like In the Heights, Hamilton is just a wee bit too polemical for my taste. Still, it’s better than this turkey.