Take Me to Church

A ride through Church Ave., one of Brooklyn's oldest roads. 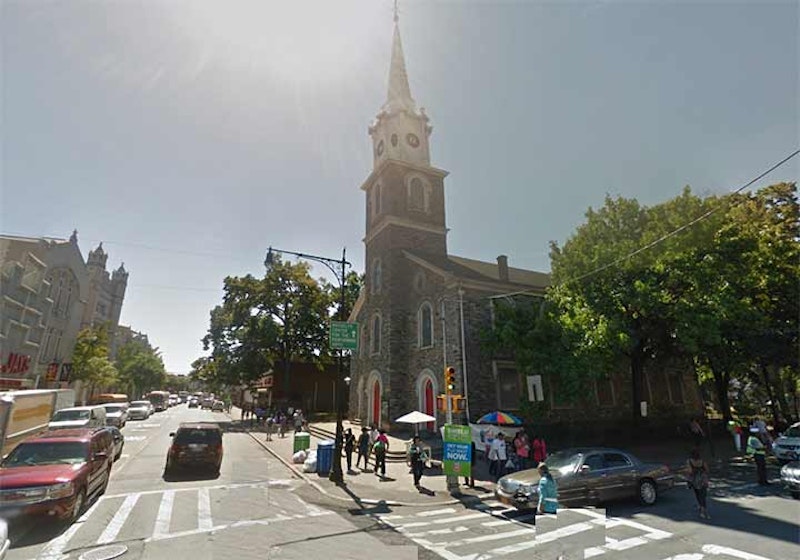 Time to begin my seventh year of chronicling the places you won’t see in the guidebooks for Splice Today. I don’t recall mentioning Church Ave., one of Brooklyn’s oldest roads before. Church Ave. runs from 37th St. between 13th and 14th Aves. on the Borough Park-Kensington border east and northeast to E. 98th St. near Brookdale Hospital in Brownsville. The B35 bus runs the avenue’s entire length, and when my parents didn’t mind transferring buses (from the B16 on Ft. Hamilton Parkway), we’d often ride it out to Flatbush Ave., at least, which then as now was a prime shopping mecca. Oddly we didn’t go to the huge Sears at Bedford Ave. and Beverley Rd. Very occasionally one parent would ride the entire line with me out to Brownsville, but that was developing into a tough area even in the mid-1960s. Just about every Saturday or Sunday, weather permitting, I loved to take a bus ride on the various routes near our house—the B16, B63 (5th Ave.), B37 (3rd Ave.), B4 (Bay Ridge Parkway), B64 (86th St. and Bath Ave. to Coney Island). What was I doing? Checking out the various street sign stylings, lamppost varieties, anything having to do with infrastructure. 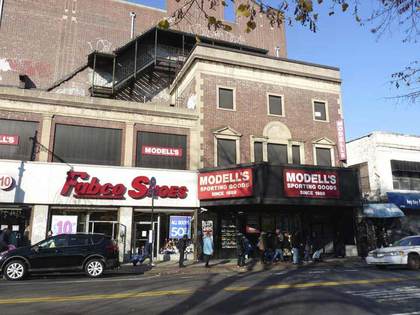 We usually bailed at Flatbush Ave., since the neighborhood got tougher east of there. But this is the heart of Flatbush, and there are plenty of things to be seen. The former Kenmore Theater takes up half the entire north frontage on Church Ave. between E. 22nd St. and Flatbush Ave. The theater, which had a distinctive black marquee with white letters (like the Albee on DeKalb Ave. downtown, also long gone) opened in September, 1928 and closed in 1999. 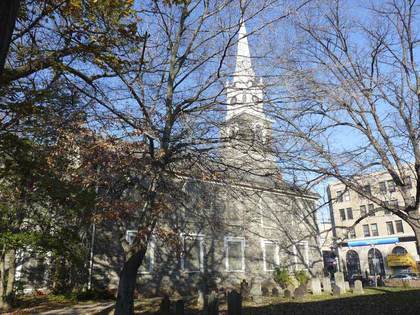 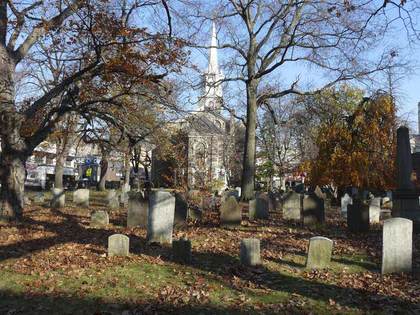 The “church” of Church Ave. is Flatbush Dutch Reformed at the main crossroads of the neighborhood, Church and Flatbush. There’s been a church at the location of Flatbush and Church Aves. since 1654, the beginnings of the village. Flatbush Dutch Reformed has had three incarnations: a wood structure built on orders from Governor General Peter Stuyvesant in 1654, a stone building in 1699, and the current one built from Manhattan schist dating to 1798. The churchyard goes back to the church’s beginnings and contains stones inscribed in both English and Dutch. Among the many stained glass windows are a few by Louis Comfort Tiffany. The tower contains a clock and bell that are dated 1796, plus a 10-bell chime that was cast by the Meneely Foundry of Troy, N.Y., and installed in 1913. The church bell has tolled the death of every U.S. president. It also offers services in Spanish and tailors services for the local Ghanaian believers. 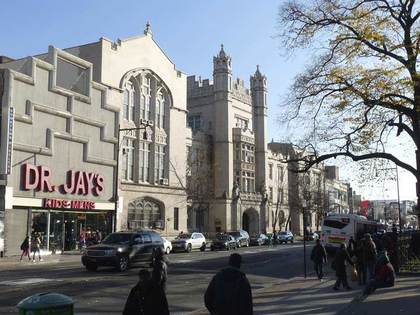 Erasmus Hall High School on Flatbush Ave., seen from Church Ave.. Named for Dutch philosopher Desiderius Erasmus, the school presents two historic buildings in one location. Its white clapboard Federal-style building, constructed in 1787, housed the private academy instituted by the Reformed Dutch Church across the street. The older building isn’t visible from the street, however, since it’s surrounded by the Gothic, fortress-like Erasmus Hall High School, constructed in 1905.

The original academy was funded by several Founding Fathers, including Alexander Hamilton and Aaron Burr. The academy became a high school in 1896: alumni include Barbra Streisand and Neil Diamond, Bobby Fischer, Lainie Kazan and Bernie Kopell and Beverly Sills. The historic academy, known by students and faculty as “the white house” can usually be glimpsed from the iron gate guarding the high school. C.B. J. Snyder’s magnificent 1905-1906 building surrounds the much older original. Erasmus St. and the former surrounding neighborhood, Erasmus, now absorbed into Flatbush, were named for Dutch scholar/philosopher Desiderius Erasmus (his parents named him Gerhard Gerhards, 1466-1536). A statue of Erasmus is found outside the original academy building in the courtyard.

From a settlement in its beginnings in the 1650s, the crossroads of Flatbush Rd. and Church La., later Church Ave., later became the Town of Flatbush which was absorbed into the City of Brooklyn in 1894—only to see Brooklyn absorbed into NYC in 1898. A lot of the side streets and little lanes you see on this map are mostly still in existence such as Johnson Pl., Lloyd St. and Lott St.; Locust St. was absorbed into Bedford Ave. while Prospect St. became Veronica Pl. “Erasmus Hall Academy” and Town Hall, now on Grant (Snyder) Ave., are already in place. The Reformed Dutch Church originally owned the land in the east part of town, and the individual plots had already been allocated. 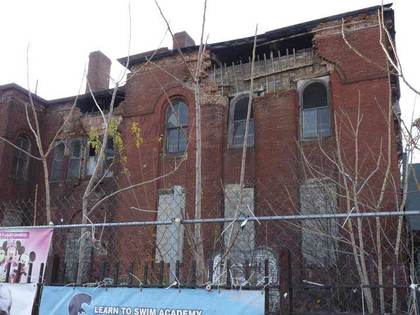 At the SW corner of Church and Bedford sat a ruin in limbo. This was once the Flatbush District #1 School, later PS 90, and was constructed from 1878-1894 in a design by John Culyer, also the architect of Flatbush Town Hall on Snyder Ave.—and it was a designated NYC Landmark. It was a public school until 1951; three years later it became the Yeshiva University Boys’ High School in 1968, the Beth Rivkah private Jewish school for girls. It stood empty since the 1990s and crumbled until it was finally razed; an empty lot sits in its place. 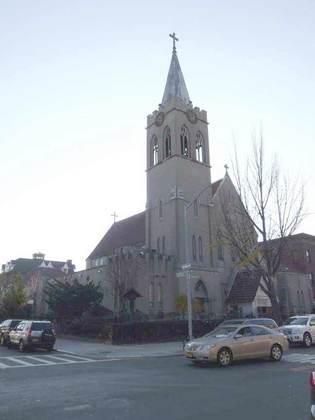 Though Dutch Reformed is the big dog, there are a number of other churches on Church Ave. The Roman Catholic Holy Cross Church was established in 1845 and centered on Church Ave. west of Veronica Pl. In the 1900s, Catholic churches all over the city built small towns in association with the parish, including grade schools, parish houses, rectories and cenacles to house the priests and nuns associated with the church and school. The Holy Cross Parish House is a brick building with a grand entrance staircase featuring both brownstone and terra cotta trim. Latin inscriptions above the door mean “This is the house of the Lord” and “This is the gate of heaven.”

Holy Cross Church is associated with a large cemetery in East Flatbush in which Gil Hodges is interred as well as pre-eminent church architect Patrick Keely. The present Holy Cross church building at Veronica Pl., dating to the early-20th century, is difficult to photograph on winter afternoons, as the sun is right behind it. Originally Prospect St., Veronica Pl. was renamed in the 1940s for Sister Agnes Veronica, a principal of the parish school until her 1939 death.

Though she’s not mentioned in the gospels, according to church tradition Veronica was the name of a woman who witnessed Christ’s torturous procession to Calvary, carrying the cross on which the Romans later nailed him. She offered Christ her veil to wipe the blood and sweat out of his eyes, and when her veil was returned to her, an imprint of Christ’s face was left on it. 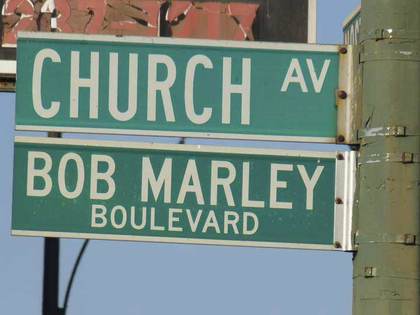 Apparently the entire length of Church Ave. from Nostrand Ave. to its end at E. 98th is co-named for Bob Marley (1945-1981) in the heavily Caribbean-American neighborhood of East Flatbush, but oddly, only two signs appear—one here at Nostrand, and the other at E. 98th. 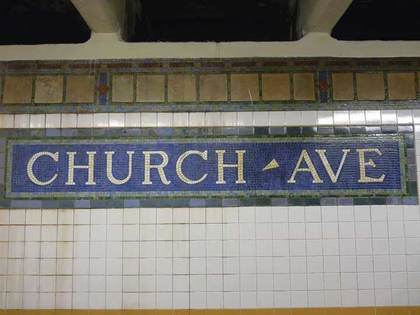 The Church Ave. station serving the #2 and #5 trains on what’s never called the “Nostrand Avenue Line” (even though two subway lines using 7th Ave. and Lexington Ave. in Manhattan) is the third of three subway lines with a stop on the avenue, this being the IRT entry in the series. It opened August 23, 1920 along with other stops between Bergen St. and Flatbush Ave. This was midway through the 1913 Dual Contracts that authorized both BMT and IRT subway line development for what were then two different companies, but designer Squire Vickers was in charge of subway signage for all stations during this time, and they followed pretty much the same mosaic lettering template. A hallmark of the design is the use of a small triangle to separate words.