It seems fitting that my Tinytown of Baltimore would embrace the myth of Poe’s legacy. 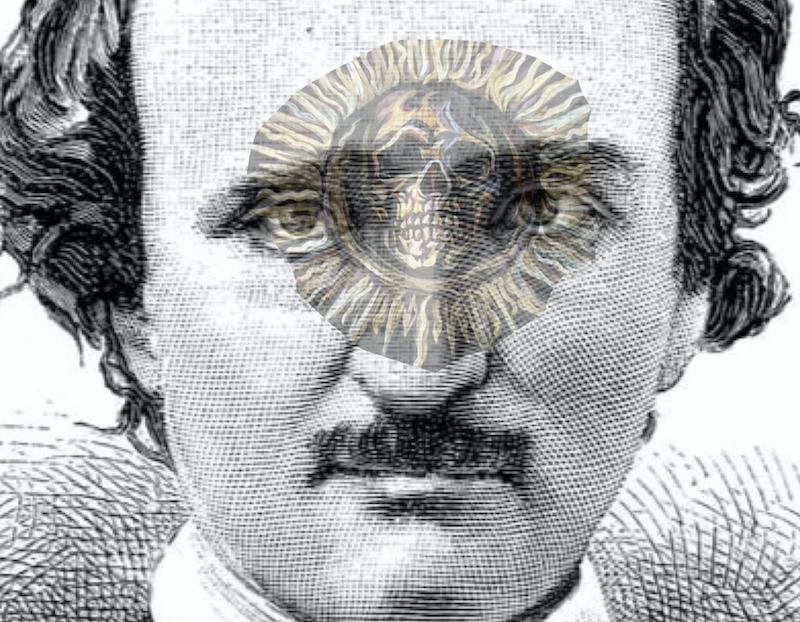 My first introduction to Edgar Allan Poe was as a kid, in Baltimore’s Hamilton, at the Arcade theater. I saw the great actor Vincent Price in The Mask of The Red Death. During that time, I also read the short stories, “Tell Tale Heart” and “The Cask of Amontillado.” I felt strangely attracted to both, and the macabre imagery they portrayed. The surreal horror of premature burials, demons, death, a throbbing heart under the floorboards. Things I couldn’t explain, but wanted to know more of. Scary movies, and the monstrosities of human nature, made good thoughts for inquiring young minds to contemplate. The great beyond is fascinating. It gave Poe endless material.

None are immune to the darkness. There’s the prerequisite study of “The Raven,” a long-winded poem about a crow, lost love, Nevermore, and the specter of death. Every grade-school student should remember learning about that creepy bird. A morbid winged messenger from some Plutonian underworld of despair, emotional suffering, the afterlife, and the big nothing of eternity from the grave. It seems fitting that my Tinytown of Baltimore would embrace the myth of Poe’s legacy. His little home on N. Amity St. in West Baltimore, and nearby there, his final resting place, buried in Westminster Church cemetery. Also, Poe liked to frequent the waterfront haunts. Taverns and pubs once found at the foot of Broadway’s pier in what’s now known as Fells Point. He was discovered there, unconscious in the gutter, later to die in a coma at Washington College and hospital, now called Church Home Hospital, a few miles away.

Poe’s demise will always be shrouded in too many mysterious circumstances. There’s at least a dozen theories on his cause of death. Brain lesions, cholera, TB, syphilis, rabies, acute alcohol and opium poisoning among the most popular. There’s a theory that he was “cooping” for local political thugs who beat him, leaving him for dead. It was voting day, and widely believed he went afoul of criminals who rousted local drunks and homeless people to vote over and over again at numerous polling places. Many of the voting booths located in pubs and bars that Poe frequented. His dying words, recorded, “Lord help my poor soul.” Not a religious sort, he asked god for a merciful reprieve. An obituary at the time stated, “Edgar Allan Poe was a morally bankrupt womanizer, who drank excessively, and was known to frequent opium dens, and prostitution parlors.” His debauchery was heavily embellished by detractors.

Today, Poe is a Baltimore icon and institution. Like John Waters, only creepier. Bon vivants of the absurd. Without them, Baltimore doesn’t have a lot of extremely interesting stuff going on. It takes a certain level of demented imagination to conjure images from fevered dreams. Even Poe stated, “I became insane with long intervals of horrible sanity.” He had a divine derangement of the senses. Poe dwelt in a scary dreamworld that few would have the courage to enter. His belief was, “All that we see or seem is but a dream within a dream.” Baltimore was that dreamy place once upon a time. A place of colorful characters where eccentricity ruled the days and revelry made the nights go down easy. A town full of possibilities for artists, poets, and dreamers alike.

It was the perfect setting for Poe’s proclivities. Wandering the cobblestone corridors in delirium, bouncing from gambling saloons to pubs and taverns, to neighborhood bordellos and opium dens. There are a few Poe-themed bars in Baltimore. The Raven Inn, and the Annabel Lee, a third, The Tell Tale Hearth, a defunct pizza joint and bar. A watering hole I often frequented, not too far from Poe’s house and close to his final resting place. Then there’s the football team that appropriated the name, Raven. Even their team mascot is named Poe.  A travesty in my estimation.

There’s also a connection through the many Poe impersonators that’ve accumulated over the decades. Not as many as Elvis, but enough to make a difference. They perform at Edgar’s graveside on his death anniversary and other official occasions. The most famous among them, my favorite, is John Astin. The fictional Gomez Addams from The Addams Family fame of cartoons and the 1960s TV show series of the same name. The long list of movies adapted from Poe’s stories include a who’s who of great Hollywood actors, including Vincent Price, Peter Lorre, Boris Karloff, John Carradine, Ray Milland, Bella Lugosi, Christopher Lee, Peter Cushing, and even a young Jack Nicholson. The horror film genre wouldn’t be as great without them or Edgar Allan Poe’s contributions to it. Fear is what drives us. Without it, we only wait for happiness to happen.