A Cynic Tries to Find a Slice of Hope

Aaron Sorkin's film The Trial of the Chicago Seven reminds the writer of ideals he lost early. 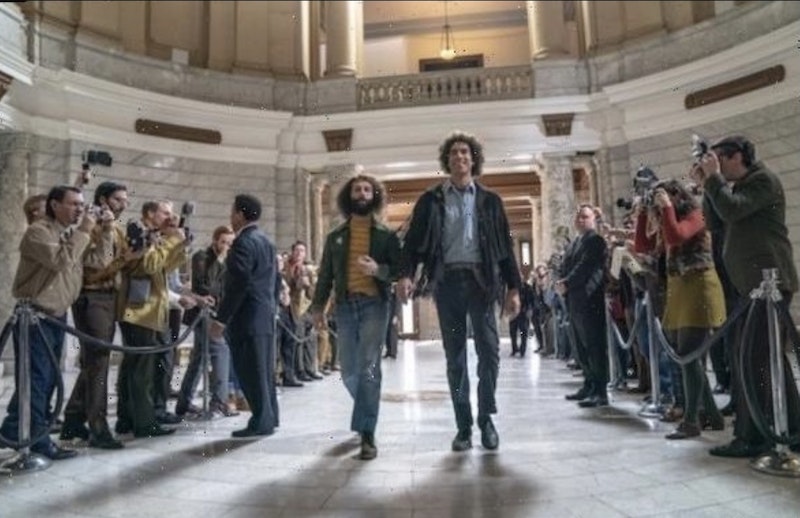 Lately, I've been trying to improve, trying to stop sneering so much. As an opinion-type writer, I'm a cynic. I do a lot of both-sidesism, as in "neither side can think." One of my greatest talents, even according to me, is minting devastating insults. I'm liable to lob them casually at people you admire, and as I do so, my head will be full of glee, like I just won the 100-meter hurdles. But then I might wonder for a moment how proud I should really be about being an excellent insulter, or even "who I am." Maybe you should stop being such an asshole, I think. And then it might occur to me to ponder how I got this way. Watching Aaron Sorkin's excellent 2020 film The Trial of the Chicago 7 last night reminded me of some of the answers.

I was 10 in 1968, and remember watching on television with my mother as the demonstrations at the Democratic convention in Chicago unfolded. She had to explain to me why they were chanting "The whole world's watching," a phrase which appears in the film many times. Over the next couple of years, as the trial of anti-war leaders including Abbie Hoffman, Jerry Rubin, Tom Hayden, Dave Dellinger, and Bobby Seale proceeded, I came to some kind of political awareness. The idea of Hayden and Dellinger bored me. I admired Seale, but too white to regard him as a role model.

But Hoffman and Rubin captured my imagination. They were serious revolutionaries and effective activists. They were also incredibly playful, full of whimsy and even joy as they engaged in political action intended to transform the American state and American culture through "street theater." The contrast between Yippie hilarity and the serious grind of political action, between Hoffman and Hayden, is one of Sorkin's major themes. But 12-year-old me was in no doubt which side he was on: the side that ran a pig for president, that gathered to "levitate the Pentagon," that threw money from the gallery of the New York Stock Exchange so we could all watch stockbrokers grubbing for cash. Sasha Baron Cohen plays Hoffman as half Borscht-belt comic, half Mao Zedong, which really makes for a unique and compelling character.

I read all of Hoffman and Rubin's books: Woodstock Nation, Revolution for the Hell of It, Do It!, Steal This Book, and so on. When I got old enough, I thought, I'd join their revolution. I tried to use Yippie tactics to overthrow my junior high school, among other things stinkbombing it with a rotten-eggs-and-Drano formula from Steal This Book.

But by the time I was a 16, in 1974, it was pretty much over. Woodstock Nation had dissolved. It's not that there was nothing left to join, much less nothing left to protest against (though the Vietnam War was winding down), but there weren't millions of joyful kids expecting a transformed world and enacting it by means of art.

Abbie was arrested for cocaine distribution in 1973 (possibly entrapped), and went "underground" for a decade, re-emerging as an environmental activist in the 1980s. And really, the transition from pot and LSD to cocaine was itself somehow political, and coincided with a transition from rock to disco, or Fleetwood Mac's transition from raw blues to polished pop.Abbie committed suicide by overdose in '89. Jerry Rubin, unbelievably, became a stockbroker.

I don't know how Abbie and Jerry were feeling deep inside by the 1980s. From the outside, it looked like they'd fetched up in cynicism and despair. And if you were reading the "opinion journalism" I started producing around then, despair and cynicism often constituted the underlying mood, even if I was trying—with mixed success—to make the disaffection as funny as Hoffman made hope. It struck me that America was just a hierarchical and militaristic in 1995 and 2005 as it had been in 1965. Its leaders, including the leaders of the opposition, were mediocre at best.

I tried not to let Barack Obama sucker me into hope in 2008. A cynic is likely to be right a lot of the time, though the accuracy of my own predictions has been mixed. But I wasn’t surprised that Obama didn't really solve race, end the war on terror, close Guantanamo or repeal the Patriot Act. The Obama "Hope" poster, a sign of what inspired so many, left me sneering. So did the Obama administration as a whole. I think I had pretty good reasons. It's hard for me not to be "wised up." But it's also hard to remember what led me to this pass: to remember the hope and joy Hoffman and Rubin lost, and that I never even got a full dose of. The depth of my cynicism is proportional to the height of that hope, but at this point I've lost even the sense that I've lost something.

Recovering the naiveté of a 12-year-old is not one of the possibilities, I hope. But I do want to remember how I got to cynicism, because it originates in hope and idealism. Maybe they're still under there somewhere. They must be, or I wouldn't be so disaffected. I wonder where in myself the idealism is hiding, and how I could express it without looking like an idiot.

Maybe that's not the right question, though.