Bennington tries and fails to intimidate the Queen of the Cabin. 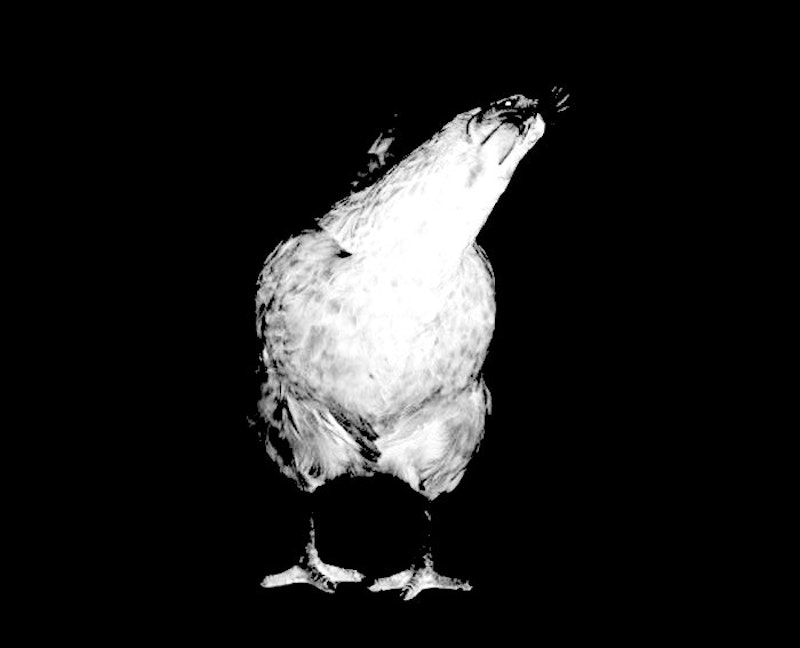 Now you know, some cats, they just don’t learn—like Garfield, the beast. Who trains him? Who feeds him? Evidently Garfield himself. What does his owner John think of this situation? (I haven’t read the novels.) Is their relationship… copacetic, so to speak? Should we be worried—as animals, as animal lovers, as people? No… perhaps no, given that Garfield’s a fictional character, but my family unfortunately isn’t. My husband’s cousin Bennington has binged and purged all week because he’s convinced it’s fixed his gastrointestinal issues. “I’m taking matters into my own hands,” he says, meaning he sticks a metal straw down his beak and makes himself vomit whatever garbage he found and ate by the side of the road while he was high on lousy weed and paint thinner.

We haven’t been letting him go into the city but we’re not keeping him in at night. That bird’s a junkie, through and through—there’s no reforming poor Bennington. Wah. Our job is just to make sure he’s kept fed and sane while he’s in our house. I’ve thought about poisoning him and finally doing away with the curse but I fear that his spirit will haunt us and ruin the rest of our lives. I know enough government secrets to know that a metaphysical plane exists and if one motherfucker is going to haunt me it’s going to be Bennington Quibbits, especially if I kill him. So, we’re going to let nature take its course and allow the junkie to do the deed. Industrial chemicals are fine to consume in our house.

“Mon, get me some prawns,” he lobs out his beak like a gangster. I am nobody’s moll. “Bennington, prawns are out of season. Also, we don’t consume shellfish in this house. Also, I think you’ve had a pretty hearty meal already, wouldn’t you say? There aren’t any more potatoes or beets or broccoli for you to munchums on? Mmm? Wanna have some munchums?” That’s when he pulled out a revolver and shot the TV in half.

My tactical training gave me the ability to react to this with cool precision, so I only started vibrating mid-sentence as I felt the heat of the bullet that passed so close to my mane. “Benny, the least you could do is shoot something valuable. Rooster and I can go to Target and get another TV any time. Five TV’s. Ten. You should shoot one of our paintings—maybe a Bracque?—or the chandelier? I mean then, you could’ve killed me, too. And I’m the most valuable thing in this cabin after all, no? I’m the only thing in here that’s truly irreplaceable? Am I wrong? Correct me if I’m wrong.”

I wasn’t. He put the gun down and went back to his plate. Later that night, police found him passed out in a McDonald’s cradling wrappers and clamshells cases for every item on their menu. Bennington had gone for a full purge after losing his cool. He must’ve passed out from all the vomiting, because he surprised us all when the toxicology report came back clean (except for Fabuloso). Bennington’s eating himself to death, but that takes a lot longer than heroin, so for now, we’re satisfied. He’s just not allowed out of the house after dark anymore. He’ll have to establish trust again. I’ll take him resistance training to the McDonald’s he binged at, make him stare at it from across the highway for an hour, and until he repents, he cannot go home or have a meal. Some call me cruel. Others call me God. I’ll just say the two are not necessarily mutually exclusive.