Even before zoning laws, Richmond Hill founder Albon Man made sure the community developed according to his specifications. 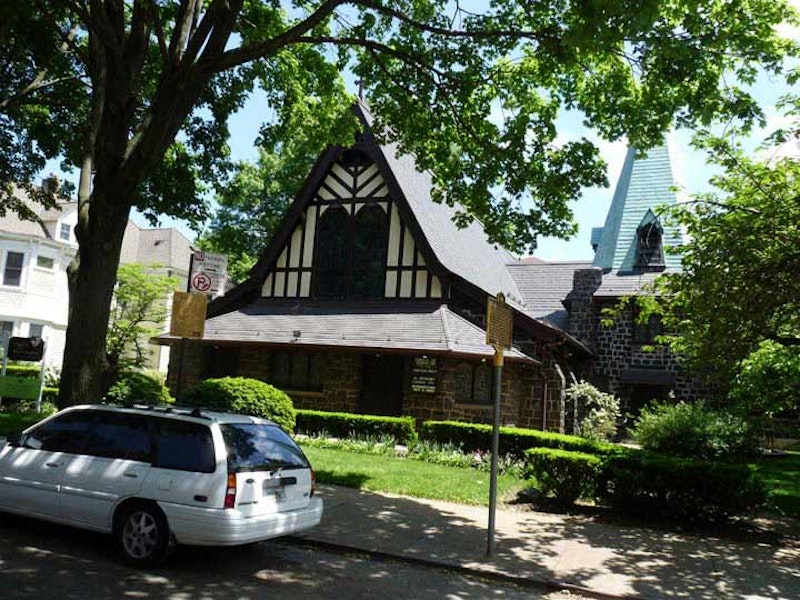 New York City has had three settlements named Richmond Hill: the one in Manhattan, in what’s now the West Village, and the one in Staten Island, in what is now Richmondtown, are absorbed into new neighborhoods. Queens’ Richmond Hill has been more enduring. In 1869, developers Albon Platt Man and Edward Richmond laid out a new community just west of Jamaica with a post office and railroad station, and Richmond named the area for himself (or, perhaps, a London suburb, Richmond-On-Thames). It became a self-contained community of Queen Anne architecture west of Van Wyck Blvd. (now Expressway) that remains fairly intact to the present day. Journalist/activist Jacob Riis as well as the Marx Brothers were Richmond Hill residents in the early-20th century. 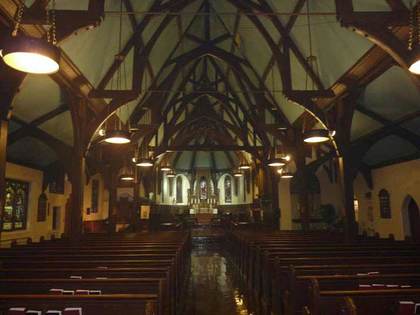 Albon Man also donated land for the Church of the Resurrection, facing 118th St. just south of 85th Ave., Richmond Hill’s first church. A small wooden Gothic Revival building was built by architect Henry Dudley in 1874; this structure is preserved within the present French Gothic stone building, which was finished in 1904, though further extensions continued until 1926. Riis was a parishioner, and New York State Gov. Theodore Roosevelt attended Riis’ daughter Clara’s wedding to Dr. William Fiske on June 1, 1900. The Seal of the President of the USA can be found under the two arched stained glass windows above the entrance on 118th. 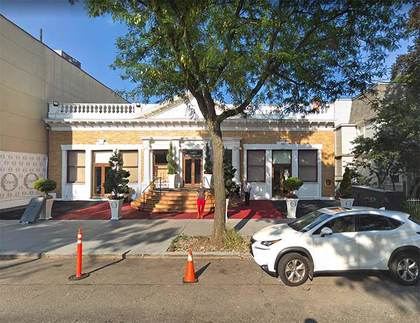 The Richmond Hill Republican Club is now fully restored as the Oligarch Restaurant and has lost its exterior plywood fencing. The landmarked building, on Lefferts Blvd. between Hillside and Jamaica Aves., pretty much looks the same on the exterior as it was when it was built in a Colonial Revival style by architect Henry Haugaard in 1908.

The building has an illustrious history. The interior originally had oak pews, doors and paneling, a bowling alley-come-archery range, and signed photographs of Calvin Coolidge, Warren Harding and Theodore Roosevelt could still be found inside when it was inspected for landmarking, according to the Richmond Hill Historical Society. During World War I it became a canteen and a place for rest and relaxation for US armed forces. The club remained an important gathering place for the Republican Party throughout the 20th century well into the 1980s. Presidents Teddy Roosevelt, Richard Nixon and Gerald Ford all gave speeches here, and Ronald Reagan appeared during primary season in 1976 and in 1980. Even Harry S Truman, a Democrat, spoke at the Club. 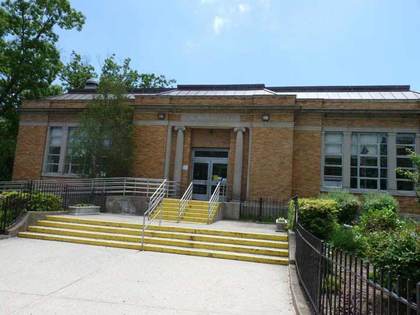 Directly across from the Republican Club at Hillside Ave. and Lefferts Blvd. is another beautiful building in a neighborhood full of them: the Richmond Hill public library. It was built in 1905 by the architectural firm Tuthill and Higgins with a grant from philanthropist Andrew Carnegie on land donated by Albon Man, the founder of Richmond Hill. Inside is a large interior mural painted in 1936 by artist Philip Evergood showing Richmond Hill as a suburban alternative to the hustle and bustle of the big city. 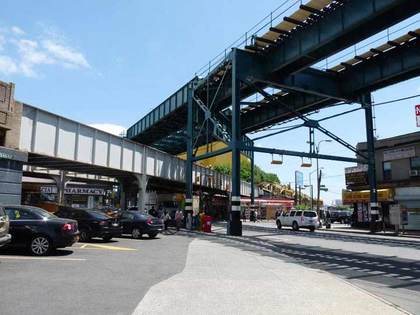 At the crossroads of Jamaica Ave. and Lefferts Blvd. there’s also a railroad crossing of sorts, as the overhead Jamaica Ave. el (J train) rises high above the Long Island Rail Road Montauk Branch. Today a mildly busy freight line, it ran passenger trains until 1998, but the LIRR neglected the stations which were by then weedy clearings along the tracks on which diesel-pulled MP72 cars plied. When the LIRR announced the branch’s closure in 1998 I was sure to grab one of the final rides. 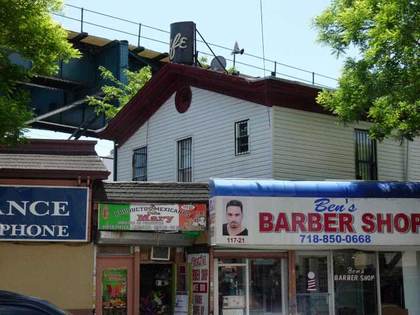 Almost as long as there’s been a Richmond Hill, the Triangle Hotel building has marked the triangle where Myrtle Ave. meets Jamaica Ave. It was built by Charles Paulson in 1868 and originally rented out as a grocery and post office. By 1893 the building, now owned by John Kerz and operating as a hotel, included an eatery named the Wheelman’s Restaurant in honor of the new bicycling craze. The hotel lodged weary travelers going east on the turnpike from New York City or coming west from points on Long Island and was known by various names through the years: the Mullins Hotel, Doyle’s Triangle Hotel, Waldeier’s Triangle Hotel, Triangle Hofbrau, and Four Brothers. Its mahogany bar was imported from Honduras, and a brass bell rang every time a round of drinks was purchased.

According to the Richmond Hill Historical Society, Babe Ruth and Mae West were patrons of the Triangle Hofbrau in the 1920s; West was routinely ejected for smoking and causing a “general commotion.” Vaudeville pianist/composer Ernest Ball  (1878-1927) wrote the score for the now-standard “When Irish Eyes Are Smiling” in one of the hotel’s guest rooms in 1912. A restaurant operated continuously in the Triangle building from 1893 to 1999. Remnants of this can be found especially on the Jamaica Ave. side where you see carvings of gnomes, beer barrels and grapes. 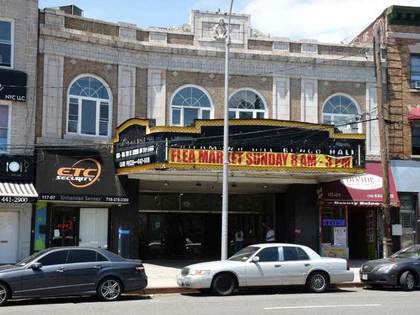 Richmond Hill preserves its own classic movie palace of yore, and this one has a marquee that has at least retained the look it had in its halcyon days, with red neon-lit nameplates and a gold border. The theater opened as the Keith’s Richmond Hill about 1928 at 117-09 Hillside Ave. just east of Myrtle Ave. The old marquee, hidden under aluminum siding for years, was restored in 2001 during production for the film The Guru. Until the 1960s, it also hosted stage shows; England’s Dave Clark Five appeared there at the height of their popularity in 1965. Unfortunately the years haven’t been kind to its ornately constructed interior, though it’s structurally sound. The theater, which sat over 2200 customers, closed in the 1970s. Next door had been Jahn’s, a 1923-vintage ice cream shop, once of a chain started by John Jahn in the Bronx in 1897. 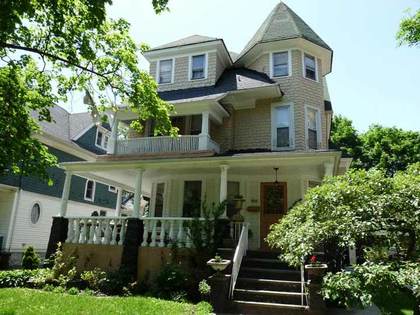 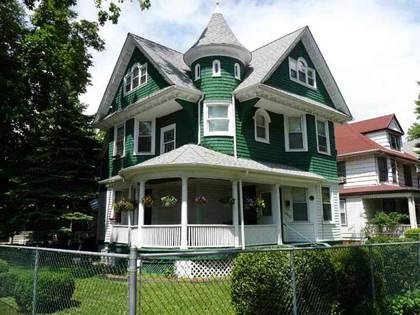 Though Ditmas Park and Prospect Park South in Brooklyn and St. Paul’s Ave. in Stapleton, Staten Island, give it a run for its money, Richmond Hill can claim NYC’s greatest concentration of Queen Anne-style “painted lady” houses in eclectic configurations painted in every color palette tastefully imaginable. The Victorian era, roughly 1865-1900, was characterized by a booming economy in many of its years, and architecture responded with an everything-but-the-kitchen-sink attitude. No color or design was written off, and no expense was spared in construction. Nothing was tacky or tasteless and despite every house on the block being completely different from the other, Victorian neighborhoods retained a unity of spirit that can’t be matched in these days of prefabricated junk. White’s the color of choice for many Richmond Hill homes, although color wasn’t a restricting factor and some houses are done in brilliant pinks, yellows, purples and greens.

Although there wasn’t zoning in the late-1800s, Richmond Hill founder Albon Man had several means at his disposal to make sure the community developed according to his specifications. He obtained restrictive covenants to dictate, for example, the absence of front-yard fences and uniform setbacks, that would give Richmond Hill a forest-like atmosphere with lots of green lawns, which persists to this day.