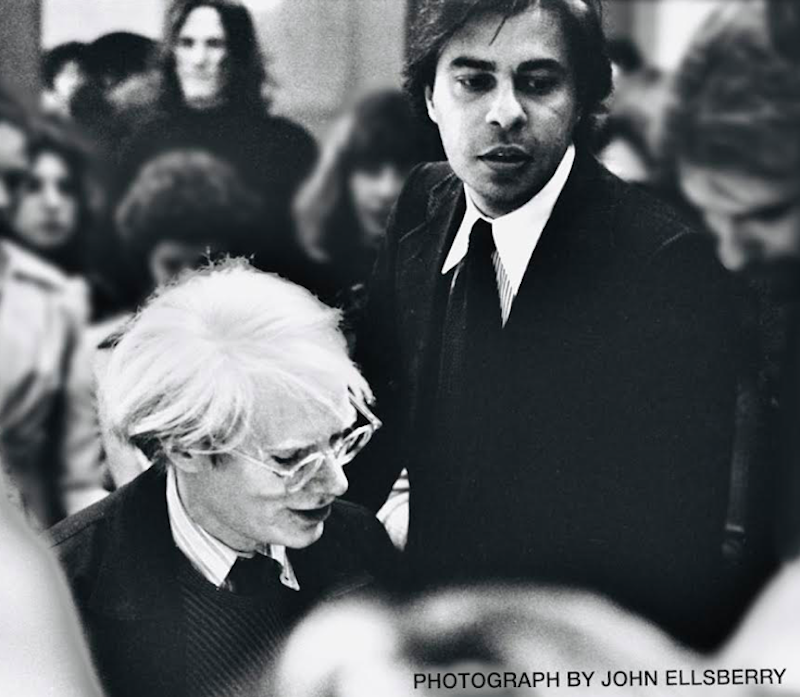 Andy Warhol and Bob Colacello at the Baltimore Museum of Art 1975. Photo by John Ellsberry.

It’s 5:30 in the morning in the backseat of a town car heading uptown on the FDR in New York City. Outside, a beautiful, waning crescent moon vista shimmers through the dark bridge shadows spanning the East River. The golden orb sliver, with a hazy dreamlike presence hangs low on the horizon.

Dipping its toe in the river, you can see craters and mountains. What’s even more spectacular is the torch above: Venus. Her radiance brightens the early morning sky. I’m thinking about Andy Warhol’s mythological status in history and how it propels him into the universe beyond super stardom. I’m getting a rush; it’s not an unusual dream.

I revere listening to one of my favorite bands, the Velvet Underground, after becoming infected in art school. Sequestered in a downtown loft, I worked on paintings after-hours while the city slept. I’d put on “What Goes On,” a rhythm guitar pounder with wailing Vox Continental organ first on the playlist, followed by “Sister Ray.” It’s dawn. Being on Prednisone at the time made me nervous.

The Velvet Underground has been described by every music critic’s arbitrating opinion, using every synonym available in the dictionary. It’s true. Their frenetic, renegade sound was a tough pill to swallow and deemed “beyond the pale.” They distanced themselves as far away as possible from the established mainstream.

Warhol helped produce The Velvet Underground & Nico released 55 years ago on March 12, 1967. No one at the time knew it would become one of the most influential albums in history. Lou Reed wrote “I’ll Be Your Mirror” for Nico’s lead vocals. The banana album had a soft landing. If you followed the original cover instructions: “Peel slowly and see” you unleashed the notorious yellow Warhol art sticker. A decision that changed lives forever. Beneath the surface exposed a flesh-colored surprise.

In 1979, Nico performed several shows with John Cale. One footnote appearance happened at The Bayou, a Washington, DC club. She also played Girard’s, a night spot on Cathedral St. in Baltimore destroyed by fire in 1985. Fanboy here saw both shows.

In a time when the Iron Curtain still existed, the night goddess was ready to take the stage. Packaged beautifully, brown-haired and dressed all in black, she emerged in a trance-like state, embracing an entire audience with indifference.

Both evenings, her solid pair of German hands pulled and stretched a harmonium. Nico sang a chilling, dirge version of “Janitor of Lunacy.” Her mystery gaze was only topped by Teutonic aloofness, confirming such understandable eccentricity was only found in Christa Päffgen. An appropriate venue for the superstar’s last show: Nico (1938-1988) played the Berlin Planetarium on June 6, 1988.

I’m on my way to one of several large hospital institutions located along the East River in Manhattan for a standard medical procedure. From these hospital rooms, many windows have river views. Once you’re past conjecture, it’s not out of the realm of possibilities, it might be like Andy Warhol’s view from his hospital bed before he closed his eyes on February 22nd, 1987.

The recent surge in Warhol popularity comes as no surprise, it includes: a Netflix miniseries, an estimated $200 million “Shot Sage Blue Marilyn” painting slated for sale at auction in May, a Brooklyn Museum of Art show “Andy Warhol: Revelation” up until June 19, 2022, and a New York Times arts editorial, (just in case you haven’t figured it out yet) “Everywhere You Look, It’s Warhol Again.” On the art news front, there are no shocks.

You’ll quickly get used to the Warhol AI voice created for “The Andy Warhol Diaries.” The technique is clever, and I think Andy would’ve approved. The series focuses on Warhol’s complex personal life and work with a combination of rare footage and interviews; proving a line between life and art doesn’t exist. His dogs Archie and Amos even make a cameo.

I had a few memorable Warhol meetings. When I was a freshman at the Maryland Institute of Art, I went to an opening at the Baltimore Museum of Art. Brenda Richardson, who recently passed away in February 2022, was the museum’s trailblazing curator who helped build the BMA’s contemporary collection. In 1975, because of her efforts, the ground-breaking “Andy Warhol Paintings 1962-1975” solo exhibition was a success. A bold, signature Chairman Mao portrait caused a controversy.

Surrounded by artists, admirers and enthusiasts, Warhol sat at a desk in front of the museum’s main entrance. Interview editor Bob Colacello stood close by. You couldn’t help but notice Andy’s charisma and enthusiasm. He smiled and signed whatever was placed in front of him. My 15 seconds started when he opened a blank page in my student journal, asked my name, then scribbled a simple, blue ball-point pen line drawing: a soup can. I felt inspired.

A luncheon was held at the Factory in New York City in 1981. As John Waters’ guest, we visited the 860 Broadway studio on Union Square. The Interview Magazine offices were where you were greeted by Cecil, a stuffed Great Dane. Diamond Dust Shoe paintings were arranged in a row against the wall. Andy had a Minox 35EL camera around his neck and took black-and-white photos.

“I know you’re a good Catholic,” I said, handing Warhol a plastic bottle of blessed Lourdes Water from St. Alphonsus Church in Baltimore. Years later, I saw the same bottle in one of the time capsule box collections at his 1989 MoMA retrospective, you should’ve seen my reaction.

From the uninhibited Pop Sixties to the MTV Generation, Warhol’s important role in transforming the cultural social landscape continues. Always a magnet for attracting new audiences, the desire for Warhol’s art has never been higher. Today we’re witnessing a Warhol frenzy that has taken on a life of its own.

My hospital results were favorable. All the new interest in Warhol is enthralling. His legacy continues to elicit new questions; just as each superstar developed their own unique star power. Sorting this one out, I think it’s all astonishing.