Death had no dominion over the products of Horatio Alger. 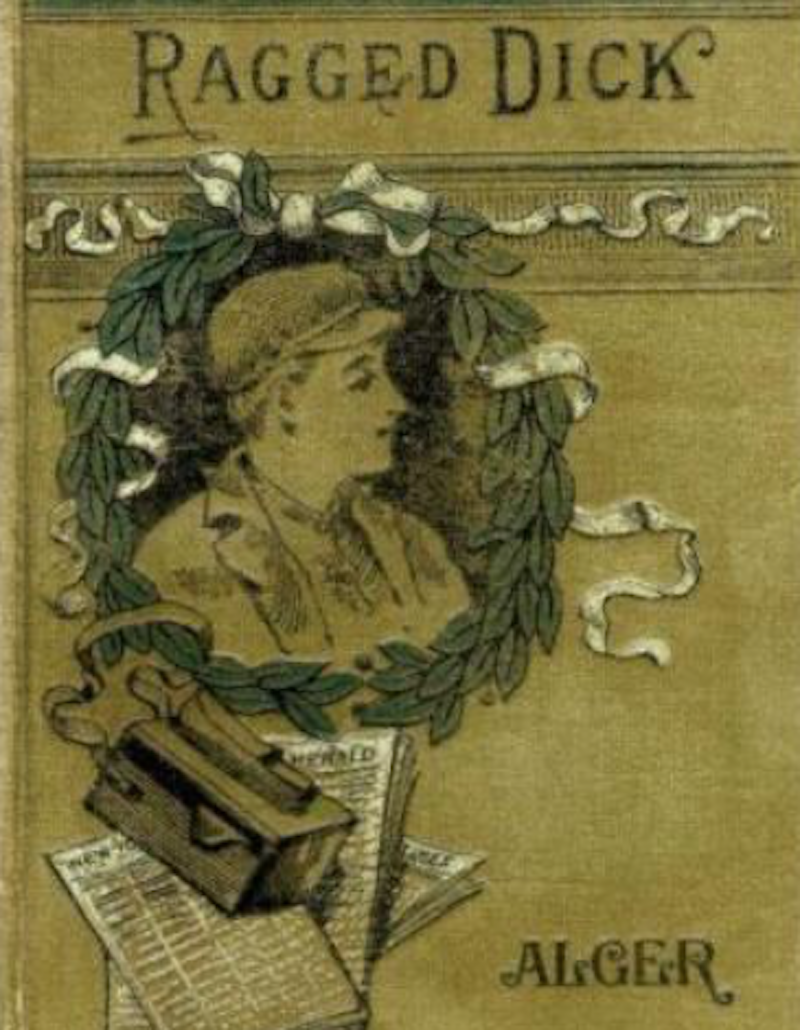 In 1928, Herbert Asbury published The Gangs of New York, his masterpiece on 19th-century New York’s criminal class, including its young ruffians. In the same year, Herbert R. Mayes published Alger: A Biography Without a Hero, the first biography of Horatio Alger Jr., whose countless books for boys presented his view of working class youths during the same period.

Asbury’s book was founded on the general knowledge and gossip he’d picked up as a New York reporter, research in old newspapers and court records, and numerous interviews with those who had participated, or known participants, in the crimes and adventures that he recounted. Mayes claimed his book was based on exclusive facts derived from a diary that Alger had started at Harvard and maintained throughout his life. Perhaps inspired by My Secret Life, the 11-volume set of pornographic diaries attributed to “Walter,” and vaguely akin to Lytton Strachey’s debunking biographies of Victorian luminaries, the book portrays Alger as a shirt-chasing sexual athlete.

The critic, editor, and litterateur Malcolm Cowley inquired about the diary. He’d found Mayes’ facts so exclusive that they could not be independently verified at all. No one else questioned them. Once Mayes became a powerful editor at Good Housekeeping, the Saturday Review, and McCall’s, the biography became the accepted truth: the basis for all future critical discussion and analysis of Alger and his works. The Dictionary of American Biography, Stewart Holbrook’s Lost Men of American History, and John Tebbel’s 1963 biography, From Rags to Riches, all rely on Mayes.

Tebbel even claimed he’d verified Mayes’s sources. He lied. There were no sources to verify. The diary didn’t exist. In 1978, on the occasion of the biography’s golden anniversary, Mayes published a new edition with a new self-debunking introduction. He admitted the book was a work of fiction that he’d largely invented. Perhaps Mayes delighted in committing and then safely revealing literary fraud; certainly, he enjoyed the income from a very successful book. Alger, who had also written for money, would’ve understood.

Alger’s name is wedded to a particular version of the American Dream: that anyone can rise from rags to riches through his own efforts. He derived this from Herbert Spencer, a 19th-century English philosopher who was once taken very seriously. Spencer had come to believe in the evolution of animals by natural selection before Charles Darwin had published The Origin of the Species. He believed this notion was equally applicable to the social sciences. Spencer’s American disciples, particularly the sociologist William Graham Sumner, popularized his ideas as Social Darwinism.

The crude product of subtle minds, Social Darwinism applied natural selection—the notion of “the survival of the fittest”—to nearly every area of human life. Its advocates believed that, even as the physical order was fixed by certain natural and implacable laws with which men ought not interfere, so was the social order.

Sumner preached that the rule of life was “root, hog, or die.” He opposed anything that might interfere with his notion of social evolution, such as the minimum wage, the eight-hour day, government regulation of economic activity, even private charities such as soup kitchens for the homeless. Slums, poverty, and other indices of human misery weren’t to be reformed. Those living in squalor deserved no better: it was a symptom of their unfitness. Sumner lacked humanity, let alone the common touch, but as a safely tenured Yale professor, he didn’t need them.

The image created by Horatio Alger’s novels far more effectively advanced this kind of rugged individualism. He published upwards of 125 novels in his lifetime (about half a billion of his books have sold since the 1860s) and some 500 short stories. Another 280 serialized novels never appeared in book form.

One wonders how much of his output was actually read by an intelligent post-adolescent. Despite the collective reputation of Alger’s work as inspiring tales of hardworking, go-getting young entrepreneurs, his stories are often far from preaching a virile gospel of success through struggle. Rather, they often seem the passive romantic fantasies of a lonely mid-Victorian pederast.

Born on Friday, January 13, 1832 in Revere, Massachusetts, Horatio Alger Jr. was the first son of a Unitarian minister. He graduated Phi Beta Kappa with Harvard’s class of 1852 and spent the first years of his working life as a starving freelance journalist before returning to Harvard for his divinity degree, which he received in 1850.

Pleasant-faced, gray-eyed, balding, and mustachioed, Alger was soft-spoken and shy. Twice rejected by the Union army for chronic chest trouble, Alger turned to writing novels. The New York Weekly serialized Marie Bertrand, a romance, in 1864. A year later, he published his first book for juveniles, Frank’s Campaign. It’s a tale of how a boy ran the family farm while his father served in the Union army, outwitted the villainous squire who held the mortgage, and succeeded in all he undertook.

In November 1864, he was called to the pulpit of the First Unitarian Church of Brewster, on Cape Cod. The Rev. Horatio Alger Jr. preached the Gospel (he was a superb public speaker), visited the sick, and comforted the aged. He took a very special interest in the boys of the parish, taking them on walks in the woods, playing ball, and organizing games, entertainments, and festivals. This idyll ended on March 20, 1866 when, according to Edwin S. Hoyt in Horatio’s Boys, a parish committee heard a report that Alger had committed “the abominable and revolting crime of gross familiarity with boys.”

The parish minutes read, “We learn from John Clark and Thomas S. Crocker that Horatio Alger Jr. has been practicing on them at different times deeds that are too revolting to relate.” Alger didn’t deny the charges, admitting that he had been “imprudent,” and that he considered this connection with the parish severed. That afternoon, he caught the first train out of town. Alger was neither arrested nor indicted, and the charges were quickly forgotten. No one would uncover the facts of his departure from Brewster for a century.

Alger traveled directly to New York with a carpetbag of manuscripts and a desire to dedicate his life to writing and to boys—an interest he’d announced to an acquaintance, William Taylor Adams. Adams wrote books for juveniles as Oliver Optic and edited Student and Schoolmate, which Holbrook characterized as “a goody-goody periodical for boys.” He apparently took Alger’s statement at face value. Soon after his arrival, Alger promised Adams a new serial novel for his magazine, set among New York’s homeless waifs, bootblacks, and newsboys, in whom Alger took a keen interest. A few days later, he delivered three chapters to Adams.

This was Alger’s first success. Ragged Dick is the story of a youth attempting to survive on the New York City streets. The magazine flew off the stands. At the end of the following year, when A.K. Loring published the serial as a book, it became a runaway nationwide bestseller. Alger endlessly reused this story over the next 32 years, usually changing only the titles, the characters’ names, and sometimes the setting.

Contrary to popular belief, Alger’s protagonists are not so much adventurous youths rising to riches as male Cinderellas, sycophants pleasing their patrons to gain lives of modest comfort. Michael Moon notes in his essay, “The Gentle Boy from the Dangerous Classes,” that mere luck, not an increased understanding of the world, sets the Alger hero on his way. Alger’s protagonists are handsome adolescents—“well-formed and strong” or “well-knit,” with “bright and attractive faces”—who, through chance encounters usually involving some spontaneous display of strength and daring, are befriended by older, wealthier men. Often, the relationship seems based upon a quick physical assessment. The lads become protégés and flourish under their mentors’ genteel patronage. Parenthetically, Alger heroes rarely make their fortunes by marrying the boss’ daughter.

Within five years of arriving in New York, Alger had published seven serial novels in Student and Schoolmate alone. He usually wrote several books simultaneously. He would churn out a few pages of one before boredom set in; then he’d turn to another and then another before returning to the first. He worked 15 hours at a stretch, often living on coffee to stay awake as the prose gushed from his pen. He wrote quickly: Frank and Fearless, 80,000 words long, took two weeks. On finishing, according to Holbrook, he took a walk around the block and returned to start Upward and Onward, polishing that off in 13 days. His life became his books: Fame and Fortune, Rough and Ready, Rufus and Rose, Strive and Succeed, Tattered Tom, Paul the Peddler, Phil the Fiddler, Slow and Sure, Try and Trust, Bound to Rise, The Young Acrobat, Sam’s Chance, Risen from the Ranks, and dozens more, most with alliterative titles.

None is any good. His writing is clichéd and pompous. Heroes invariably assume manly stances and villains charge like bulls to no avail. Characters are interchangeable: there’s no difference between Tom Temple and Tom Thatcher or between Tom Thatcher and Walter Sherwood. Though later novels are set in the Wild West, San Francisco, Australia, or England, the stories never change. A consistent thread through the books is the racism one might expect from a mid-Victorian of Alger’s social class and education. His Native Americans and Asians are stereotypes, his Negroes subhuman.

His output became increasingly sloppy. Alger began forgetting whether his current hero was Andy Gordon or Andy Grant or Bob Burton or Herbert Carter. Sometimes a single hero might bear five or six different names in a manuscript. He must’ve provided many a copy editor with steady work.

The books also became even more intellectually flaccid. Brave and Bold, ostensibly the tale of a factory boy, doesn’t identify the factory’s product or show its hero doing a day’s work.

But these incredibly bad books had been incredibly good magazine serials, as Hoyt noted: each episode rises to a climax, leaving ‘em panting for more. Alger continued producing three or more books a year until his health began failing in the winter of 1898. He was planning to visit his sister in New England when asthma overcame him and he died on July 18, 1899.

Death had no dominion over his product. His publishers lured Edward Stratemeyer, the future creator of Tom Swift, the Hardy Boys, and Nancy Drew, to squeeze new Alger novels from the plot outlines and incomplete serials left in the dead man’s bottom drawer. Alger remained a best seller until World War I, when changing taste in children’s literature marginalized him.

As literature, Alger’s books are trash. As propaganda, their effect on American culture, politics, and economics was stupendous. The influence of the code they were believed to preach has probably affected more Americans than did those of any other American writer of the Victorian era. It still does.

Not bad for a child molester.