I hope everyone has a place they can go to these days. 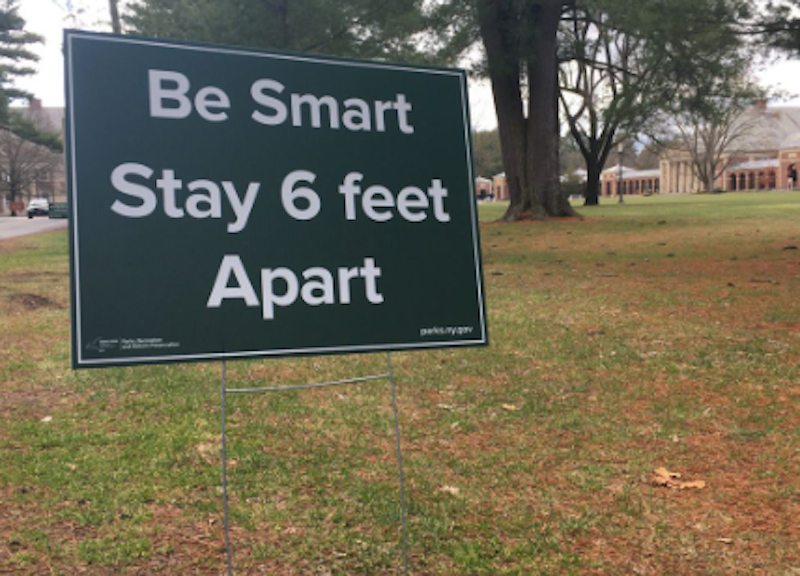 On Sunday, as I was hanging out at what's called the "sculpture garden" at the Virginia Museum of Fine Arts, I noticed a fellow come onto the grounds clad in a red blazer, lavender shirt, and cream-colored silk trousers that matched his homburg hat. Also, he was shoeless, which I’d later hear from someone he'd talked to was because he lived nearby and saw no need for such a formality in his backyard. This unshod, unstable dandy was acting erratically, approaching random people, getting close to them, and provoking discomfort. According to an observer, he wasn't intoxicated, so perhaps he was a victim of "lockdown cabin fever." Maybe this guy wanted to dress up like he's attending a Wayne Newton show at Caesar's Palace in Vegas circa 1985 and flaunting the new social rules of the pandemic.

I hope everyone has a place they can go to these days. Remaining sheltered in place for days at a time eventually feels like being under house arrest without even having committed a crime. I'm fortunate to have the Virginia Museum of Fine Arts as my daily refuge, as are a bunch of others here in Richmond. The sculpture garden's a large, attractive space where you can sit on chairs and benches, or on the grass as many do. It's a de facto public park with some bonuses thrown in—lovely architecture spanning three centuries, attractive landscaping, and some fine works of art. Just being there's an elevating experience.

Recently I was sitting on a bench around 8 p.m. in the outer part of the grounds where few people congregate. A security guard came by and told me I'd have to leave. This surprised me because the place has always been open to the public 24/7. When I protested he said things had changed "because of the coronavirus." I asked him what sitting alone on a bench could possibly have to do with the coronavirus. He just shrugged his shoulders like a functionary forced to enforce a senseless rule.

But it gets worse. I also got kicked out of the sculpture garden for a day last week, apparently as an indirect result of the pandemic panic. Another security guard recently chastised me for leaving my knapsack unattended on a bench as I took a stroll, implying that there could be a bomb inside. I didn't learn my lesson and did the same thing several days later, only to find my bag gone and the same guard waiting for me when I returned. He told me that someone had called the police and that my punishment for the second offense was a one-day ban from the premises. When I argued, he said people's nerves were on edge because of "the situation." When I inquired about the relevance of that to my circumstances, he gave me the "coronavirus shrug." So I left, cursing the pettifoggery of it all.

But I served my time and now I'm happy to be back at the museum, which to a certain extent is functioning as an outdoor bar during the lockdown, now that bars are no longer an option. Normally the guards enforce a strict no-drinking policy. I saw one of them make two guys pour their beers out, but everyone's drinking like crazy here now, and they're not making their usual efforts to conceal their beverages. The guards have apparently been instructed to let it go. Last Sunday morning, all the garbage cans were overflowing with beer and wine bottles. It looked like there had been a rock concert on Saturday evening.

The scene at the VMFA is a microcosm of the nation. Few of the younger people care about masks or social distancing. The older ones, feeling their mortality and a greater sense of civic responsibility, behave with caution. I’ve no reason to believe the youth will modify their attitude towards the pandemic, especially after having seen the viral photo of all those college kids partying while packed together at Lake of the Ozarks. We can rail against them all day long, but they won't hear us.

After this lengthy, painful lockdown, I'm ready for some return to normalcy. I haven't had a haircut in four months and I'd like to do something about that. Sitting in a restaurant right now doesn't sound that attractive, but I’d have a meal at one if there were outdoor seating. I tried to do that last week, but the people at the restaurant said that ordering take-out and eating it on their empty patio was against state regulations. In this situation, the government wants me to think it's protecting me, but it's really protecting itself from criticism that it's indifferent to human life. This is one way that oppression is born.

Read this statement by a politician and you can easily guess his political affiliation: “I continue to believe that we need to be slow and cautious about reopening.” That's from our mayor, Levar Stoney, a Democrat. Stoney received an exemption from Virginia Gov. Ralph Northam’s executive order that more businesses would be allowed to reopen on May 15, so we have continued the lockdown. Being a Democrat, the mayor expressed no concern for those business owners who are still not allowed to operate and make a living. Freedom's now equated with selfishness.

I'm willing to accept some risk for my freedom, but it can yield bad surprises. I was chatting with a friend last week at the museum and someone I didn't know joined us, staying six feet away from us. When my friend said he was leaving, I stood up and said the same. The other guy then decided he wanted to talk to me, so he walked towards me. I backed up, trying to avoid him, but he didn't catch on. The guy managed to get fairly close to me, and at that moment he coughed, which I believe gave me every right to punch him in the face. Fortunately I’d managed to turn my face in the other direction. As I left (immediately) he said, "Let's chat again." "Not a chance, asshole," I thought as I quickly left.