Undefended borders of the five boroughs. 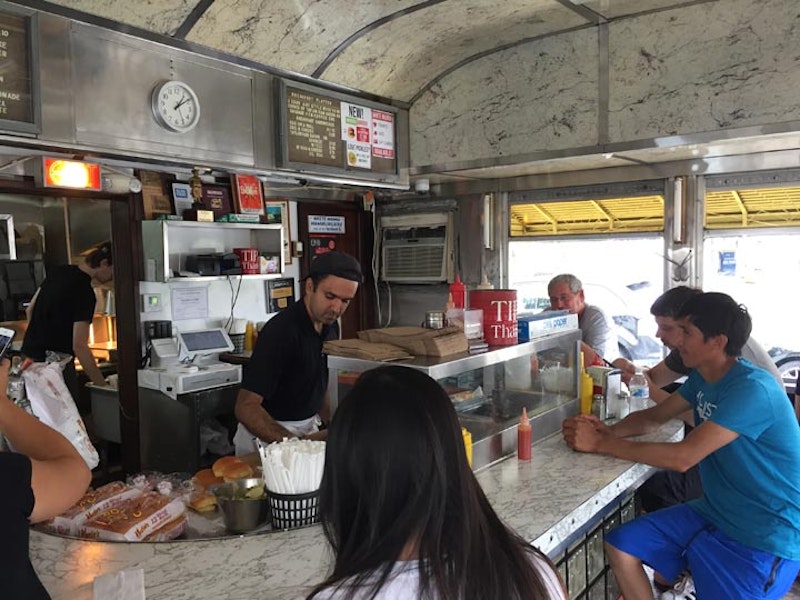 Signals are mixed during the COVID-19 crisis. We’ve been admonished to stay inside, pondering the bad choices we’ve made; or we’re encouraged to go outside, compliantly wearing masks and keeping six feet apart, and don’t dare think of actually entering the water at the beach. It’s frustrating, since on a weekend (and sometimes during the week, if I’m feeling flush, with the exorbitantly high commuter railroad fares from Little Neck to the city) what I do is grab my Panasonic Lumix camera and head out to photograph the city. During the past few years, I’ve also hit selected points outside of town. I wouldn’t get on a subway right now if they paid me the $2.75, and I’ve been restricted to shuffling around Little Neck, Douglaston, Great Neck and Bayside, which I’ve come to know much more thoroughly.

But I think of times past, when I roved freely not only through the five boroughs, but also the undefended borders. There was the time I jumped on New Jersey Transit, and got out in Hackensack, NJ, a small town in Bergen County along the river of the same name. The tracks run down the middle of Railroad Ave. and when you get off the train, there’s a certain small-town vibe which is dispelled once you walk east on Anderson St. past the hulking Sears store and reach busy River St. I headed a few blocks south to my destination, a tiny, red-roofed hamburger joint on a large parking lot (its square footage is bigger than the restaurant, set between a gas station and a Hertz distributorship). This is the White Manna restaurant, whose lunchmeat and fries are renowned throughout northern New Jersey.

There’s a Jersey City counterpart, the White Mana, with just one “N.” That White Mana has its origins at the 1939-1940 Flushing Meadows World’s Fair, evidenced by the Trylon and Perisphere symbols in its exterior. It’s a tidy, circular building, with a horseshoe-shaped counter. The idea behind so small a restaurant was the “three-step” rule: The person behind the counter need not take more than three steps to prepare the order.

After the fair closed, entrepreneur Louis Bridges purchased it and made it the keystone of a five-restaurant franchise, all known as White Mannas with two N’s, located in Jersey City, Hackensack, Elizabeth and Springfield. Manna referred to the bread-like substance that Yahweh rained down on the itinerant Israelites during their travails in the desert after leaving Egypt in the Book of Exodus. Originally, all of Bridges’ Mannas were correctly spelled with a double N, but after The Jersey City White Manna opened in 1946, a sign painter mistakenly left out one N, and this error is now used to tell apart the two original White Man(n)as that are still operating, one N in Jersey City, two in Hackensack.

Though the restaurants have different management now, both have a roughly spherical design facilitating the “three-step” maneuver, limited to cramped interior space and burgers a bit larger than White Castle and smaller than say, the fare at 5 Guys or Shake Shack. The fries are a step above McDonald’s and a step below Nathan’s, the benchmark of French fries quality. 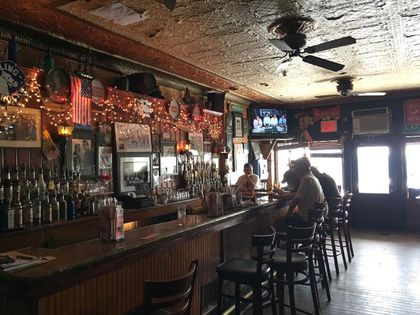 One of my favorite spots while hiking the twisting and turning length of Richmond Terrace on Staten Island’s north shore—home to a new pedestrian walk facing Upper New York Bay and a long-abandoned railroad, as well as the remains of gypsum plants and plumbing supply firms—is the hole-in-the-wall Leidy’s Shore Inn, a doughty institution founded by Jakob Leidy (say it LEE-dee) in 1905, making it nearly 110 years old. Over the decades, its main clientele had come from the area gypsum plants, as well as from the retired sailors who used to inhabit Sailors Snug Harbor, which is about a ship’s length away. Recalls the Shore Inn’s owner, Jakob’s great-grandson Larry Liedy, “My father used to drive them home,” he said. “These guys, they’d spend their whole paychecks here.”

The Shore Inn is frozen in the mid-20th century, which is how the regulars prefer it, from its pressed tin ceiling to its wood plank floors. On a midweek afternoon, when I visited, the vibe is relaxation as the trucks rumble down Richmond Terrace and the tugs guide barges down the Kill Van Kull. The Shore Inn has undergone trials over the past decade. For a time, there was worry it would lose its liquor license (the situation has been resolved). In August 2011, Hurricane Irene damaged the building, which still needed repairs for years afterward. Now the virus infects every aspect of existence. I hope my favorite haunts such as Neir’s Tavern of Woodhaven and The Old Town Bar at Union Square as well as Liedy’s can survive it. The Irish Cottage in Forest Hills hasn’t. 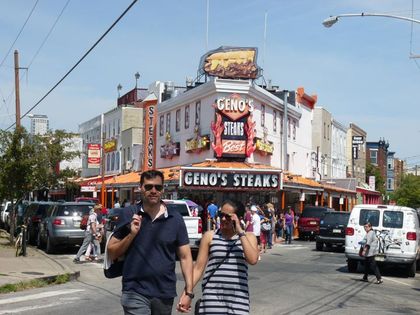 I hadn’t left the New York City metropolitan area since 2010, when I journeyed to Troy, New York with my father’s cremated remains to deposit them, per his wish, with my mother’s in St. Joseph’s Cemetery. The opportunity presented itself, though, in August 2019 to visit Philadelphia with my friend Joanna to catch a Phillies-Mets game at Citizens Bank Park. We got there a few hours early and walked or cabbed around to highlights like the Liberty Bell and Independence Hall. I’d been to Philly a number of times for camera roves, but the previous visit had been in 2008. I had a cheesesteak at Reading Terminal on that occasion but never visited the two capitals of Philly cheesesteak, Pat’s King of Steaks or Geno’s, pictured, which face each other across Passyunk Avenue and South 9th St.

We took our place in line at Pat’s on the hot, humid day and soon enough, were rewarded with limp roast beef, indifferent-tasting cheese and white onions on long buns. We wondered what the fuss was about since I’ve had much better roast beef elsewhere at Roll & Roaster in Sheepshead Bay. In any case the Mets beat the Phillies so we went home satisfied. 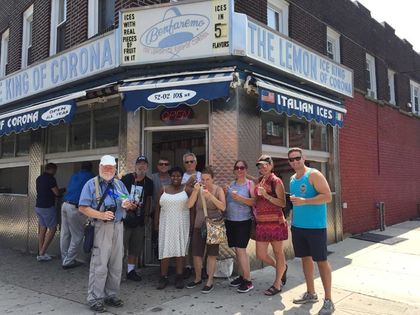 A 108th St. mainstay in Corona, Queens, Peter Benfaremo's Lemon Ice King of Corona started dispensing lemon-flavored Italian ice in 1944. Today, the establishment serves either 25 or 29 varieties (depending on which of their signs you believe). Famous for their ices containing chunks of real fruit, their selection today also includes exotic flavors such as chocolate chip and peanut butter.

Like any great institution, there are rules. You can’t buy one scoop of one flavor and another in a different flavor in the same cup. And, though they’ve relented somewhat in recent years, napkins are not dispensed; you have to lick the sticky ice off your fingers after squeezing it into your mouth from the paper cup. The best bet is to cross Corona Ave. to the park across the street and take in a bocce game while slurping the ice. 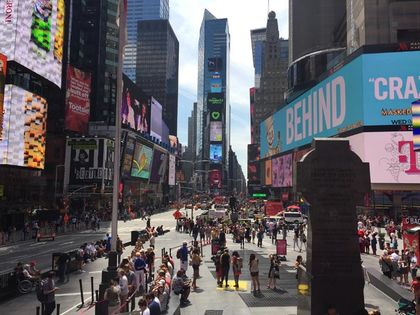 Even a journey to Midtown is, as far as I’m concerned, something of a risky journey at the moment, as I’d have to pass through the virus-ridden Penn Station even to get to the street and make my way toward Times Square, the epicenter of civilization. That wasn’t a factor last year, though, when I wandered from my desk at a small design firm I was working in near Columbus Circle and took this shot from the red TKTS steps in front of the Father Duffy memorial.