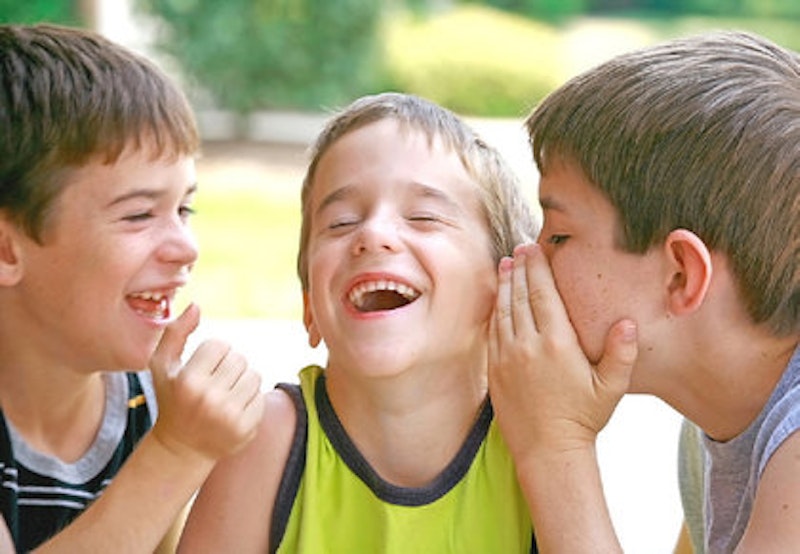 “The teacher said we have to call everything that’s round circular objects now,” my daughter explained to me, years ago, when she was in fifth grade. “We aren’t allowed to say the word balls.”

“Balls?” I repeated, incredulously. “Why wouldn’t you be allowed to say the word balls?” As a mother of three girls, I couldn’t possibly understand why the word would be forbidden in a classroom. What was the gym teacher to do?

Then I gave birth to a son. For the first near-decade of his life, the word had no secondary meaning whatsoever. A request like “Go out and pick up all your balls off the lawn before it’s time to cut the grass!” would have solicited zero hysterical giggle fits even six short months ago.

But my boy turns ten next month. A huge sports fan who plays baseball and basketball, he leaves circular objects all over the driveway, yard, garage and car on a daily basis. And now, suddenly, I understand my daughter’s long-ago teacher’s request.

If I told him to go pick up all his balls off the lawn right now, he would laugh so hard tears would stream down his face, he’d double over, probably fall to the ground, and immediately start repeating to his eye-rolling sisters that mom had told him to pick up his balls off the lawn. Last night my son was hitting some new wiffle balls around while we were waiting for the meteor shower, and my daughter accidentally walked into a trap and commented that his balls glowed in the dark. Huge mistake. We all groaned at the same time while my son fell to the grass in hysterics.

I’m not sure how it starts—this place in life where boys teach other boys that balls are funny. On the school bus, I’m guessing; the den of all evil. There must be a designated sixth-grade punk responsible for whispering-down-the-lane some secret time-honored dick ’n’ balls tale of which, as a woman, I could never guess the contents. The innocence of youth fades from boys’ eyes in that moment as an understanding replaces it and suddenly balls are forever thereafter entertaining.

It’s positively mortifying for us as mama’s-boy moms, I can report. For God’s sake, I’m usually joking about still breastfeeding him. I’m a mess over him growing up. I got teary-eyed just last week when I noticed the fine layer of hair on his legs. I had to tell my husband to remind him to take showers every day because—could it be?—he was actually starting to be stinky from all the circular-object practice. Every time he hugs me I feel like he’s a little bit taller.  His little-boy padding is gone, though I cherish moments in the morning once in awhile when I catch a glimpse of him still asleep and he still has sweet baby shadows on his little face. I am not ready for balls to be funny.

Nothing good follows balls being funny. It was terrifying enough when I went to his classroom play at the end of third grade-- he portrayed the prince and a little girl came up and asked me if I knew that the little girl playing the princess thought my son was cute. I gaped at her, speechless, until she sort of backed away towards her mother. I don’t think I’m going to do well on prom night.

Holy circular objects, my boy is growing up.